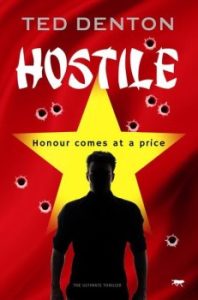 A young financial executive is kidnapped before he can undermine his new boss’ nefarious scheme. The plan he uncovers is to steal the patents to a breakthrough anti-viral wonder drug.

The notoriously dangerous Chinese businessman will stop at nothing, including abduction and government corruption, to achieve his goal. He enlists the violent Triad gang to wreak mayhem on those who stand in his way; however, everything is not as it seems…

Kidnap-rescue operative Tom Hunter is thrown into in a deadly race against time to save lives and halt the deadly deal. But can he stop the Chinese gangsters before it is too late?

Thrilling and unnerving insight into those who will do whatever it takes to win at all costs. A lens into the shadowy intersection of organized crime and malevolent government influence. A feeling that the reader has been kept guessing right to the end!

I love crime fiction thrillers. The full throttle, visceral nature of the genre offers the reader an opportunity to become absorbed in an action-driven, plot-twisting journey following the most base natures and instincts of humanity.

The greatest challenge of the book was the detailed research required into the shadowy underworld, rituals, and methods of Triad organized crime gangs.

The biggest opportunity of the Tom Hunter thrillers is reaching wider audiences seeking an exciting action-led read and being able to share accurate, researched insight into the methods of malevolent political regimes (Russia/China etc.) and their relationship with organized crime, of which the reader might not have previously been aware.

Fascinated with the psychology of crime, the dynamics of power, and the complexities of the human condition, Denton brings the look-through of a cinematographer’s eye to the written word, sharing close-up visceral intensity with the reader at every twist and turn.

Ted is a seasoned adventurer, having visited some of the world’s most remote peoples and inaccessible countries.

He is passionate about geo-politics, gastronomy, boxing, and the shared responsibility to resist global cultural homogenization.

He is a member of The Society of Authors and The Honorary Society of International Thriller Writers.

To learn more about the writer and his work, please visit his website.

The Dying Day by Vaseem Khan

Death on the Shelf by Allison Brook