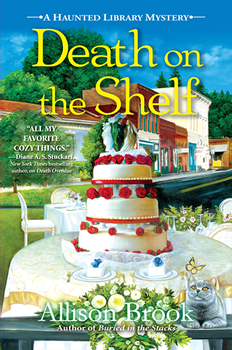 We rejoin amateur sleuth Carrie Singleton in DEATH ON THE SHELF, Allison Brook’s fifth novel in her popular Haunted Library series. This time the focus of the book is Carrie’s best friend Angela’s wedding. From the first page, disaster threatens to ruin Angela’s happy day when the restaurant hosting her wedding shower burns down.

Carrie accepts the help of Angela’s cousins Donna and Roxy to help save the day. Angela’s less-than-thrilled reaction has Carrie second-guessing herself, but other than some overly friendly exchanges between Donna’s husband Aiden and Roxy, as well as a vigorous argument between Aiden and Angela’s brother Tommy, the shower goes off without a hitch.

The wedding day is another story. Tensions are high between Donna and Roxy, as well as Aiden and Donna and Aiden and Tommy. Just when you think Angela’s wedding will be drama-free, Aiden collapses head-first into a chocolate fountain and dies. The suspects are plentiful and motives abound as Carrie Singleton is once again called upon to assist in bringing a killer to justice.

Author Allison Brook was kind enough to sit down with The Big Thrill and share some insight into her writing—and give us tantalizing clues about what’s next for her intrepid protagonist. 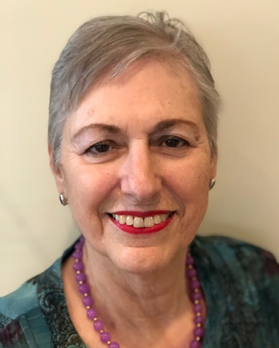 Your books have a supernatural element to them. What drew you to including a ghost as a main character in the book series?

Good question. I’ve included ghosts in other books, and I thought that having a ghost in this series would give it an added dimension. Evelyn Havers, a woman who remains 65 years old—her age when she died—was an aide in the library where my sleuth, Carrie Singleton works. She helps Carrie solve mysteries. Evelyn knows the town and its residents well and offers advice and suggestions. She can also be elusive, especially when one of her young relatives might be guilty of a crime.

Why did you choose a library as the main hub of Carrie’s life?

A library is the perfect setting for my sleuth. Working as head of programs and events in the Clover Ridge Library, Carrie is surrounded by friends and colleagues in a cozy community. And the new people she brings into the library as speakers and performers present an array of possible homicides and murderers.

Carrie has evolved from an aimless Goth into a solid member of Clover Ridge, and now she’s being asked to join the town council, to be a leader of her community, and she’s in a serious relationship. When you created Carrie, did you have her entire journey mapped out, or do you “extend the road” with each book you write?

No, I didn’t. Each book took on its logical next step and developed as Carrie blossomed and matured. I’ve loved watching her grow and learning what she’s capable of becoming and doing.

Families can be so fraught with trigger points and emotional histories, and they of course all come out during a wedding. How hard was it to create the family dynamics for Angela’s family and what did you use for inspiration?

My characters are my most important element of my series, and their relationships with one another is something I love to explore. In previous books I delved into, it was Carrie’s relationships with her father and her mother. In DEATH ON THE SHELF, Angela’s family dynamics come into play—her fear that her explosive brother will ruin her wedding; her old feelings of insecurity that rise to the surface when dealing with her older first cousins. It wasn’t at all difficult for me to create the family dynamics of Angela’s family. I had already introduced her brother in a previous book, and the others simply came to mind. My inspiration is having many years of seeing how families interact, including my own.

You have a large ensemble cast full of red herrings in this book, which is delicious. Was there any particular character in this book you had the most fun writing? (Without giving spoilers, of course.)

I got a kick out of writing Vera Ghent, the friendly, garrulous woman who manages the medical office of Dr. Aiden Harrington and Dr. Nick Gannon.

What do you see next for Carrie?

I’ve just completed Dewey Decimated, the sixth book in the Haunted Library series. Now on the town council, Carrie has to vote on a valuable piece of waterfront property. She also has to contend with the noise and problems that the new addition brings, one of them being a ghost suffering from amnesia who drives her and Evelyn crazy as they try to figure out who murdered him.

A former Spanish teacher, Marilyn Levinson writes mysteries, romantic suspense, and novels for kids. Her books have received many accolades. As Allison Brook, she writes the Haunted Library mystery series. Death Overdue, the first in the series, was an Agatha nominee for Best Contemporary Novel in 2018. Other mysteries include the Golden Age of Mystery Book Club series and the Twin Lakes series.

Marilyn lives on Long Island, where many of her books take place. To learn more, please visit her website.