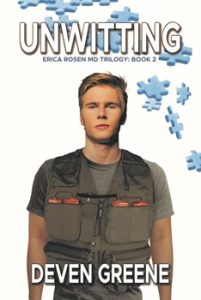 Dr. Erica Rosen’s world is turned upside down after a suicide bomber explodes amidst a large crowd entering Oracle Park baseball stadium, near her San Francisco home. Many are killed or injured, and police have no leads in solving the case.

Erica becomes involved after a teacher of young autistic men calls her. The teacher believes her students are involved in the bombing but is afraid to contact law enforcement. She reaches out to Erica, who has experience with special needs children.

Erica arrives at the school but finds the police already there and a young autistic man doing a jigsaw puzzle, oblivious to his murdered teacher on the floor. The young man has information about the mastermind behind the bombing but has limited ability to speak. Erica is determined to protect him, prevent further bombings, and find his missing classmates.

I tried to make this book as realistic as possible about autism. Erica Rosen becomes attached to a young autistic man, Zaron, whom she suspects holds information that could lead police to a dangerous criminal. Zaron has limited ability to speak, similar to many autistic people, and Erica must try to find out what he knows. Many books and movies involving autistic individuals focus on those who are high functioning. They are very smart and competent in many ways but have strange personalities. They tend to wow the audience with their brilliance.

In UNWITTING, I try to present a realistic view of lower functioning autistic people like Zaron. The uneven distribution of abilities accompanied by a lack of social and communication skills is an overarching characteristic of this disorder. Zaron’s lack of social awareness is manifest by his disinterest in demonstrating the abilities he has. While Zaron clearly has some skills, it is important to realize that some people diagnosed with autism are more severely affected and lack even the limited abilities of Zaron.

I have always been attracted to crime and suspense stories, both true and fictional. TV shows such as Law & Order, Breaking Bad, and Forensic Files are among my favorites. With my background as a PhD in biochemistry followed by years as a practicing pathologist, writing in the medical thriller category seemed like a natural. I enjoy constantly learning new things as I research details I need for my stories. In addition, I find writing fun and exciting, without the stress of dealing with the diseases of real people.

The novel revolves around Zaron, a young autistic man whom the protagonist, Erica Rosen, takes under her wing. If you read the book, you’ll see that it is dedicated to Aaron. Aaron is my adult son with autism who Zaron is based on. While Aaron was never involved in a plot to bomb people (not to my knowledge, anyway—he wouldn’t tell me if he was), I tried to imagine how he would react at each step of the writing. Many of the descriptions in the novel are taken directly from my experiences with Aaron. While Aaron has many isolated abilities, he remains dependent on caretakers. With no worries about politics, global warming, finances, or friends, I believe he is happy.

Fiction writer Deven Greene lives in the San Francisco Bay area. Ever since childhood, Deven has been interested in science. After working as a biochemist, she went back to school and became a pathologist. When writing fiction, the author usually incorporates elements of medicine or science. Deven has penned several short stories. Unnatural, Erica Rosen MD Trilogy Book 1, is the first novel the author has published. Her recently completed novel, UNWITTING, is the second novel in the trilogy.