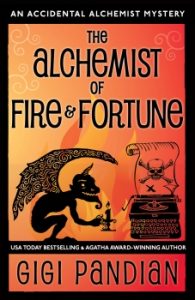 The Goonies meets Charade in the latest Accidental Alchemist Mystery. A blackmailer obsessed with gold, a boyfriend who’s more than he seems, and a treasure hidden on the Oregon coast…

Alchemist Zoe Faust’s mentor Nicolas Flamel is back in her life, but catching up will have to wait when an elusive blackmailer threatens to expose a dangerous alchemical secret. Zoe’s mischievous living gargoyle best friend Dorian, who thinks of himself as a modern-day Poirot, is off on a treasure hunt he believes is the key to proving himself as valuable to Zoe as her human family. Rumors, treasures, and secrets intersect to unearth more than Zoe could have dreamed—and could leave her found family changed forever.

Gigi Pandian recently spent some time with The Big Thrill discussing her latest mystery, THE ALCHEMIST OF FIRE AND FORTUNE:

Because I write about alchemy, I go down the rabbit hole of research with each book I write in the Accidental Alchemist series. I generally do a combination of book research, internet research, and travel. The series is set in Portland, Oregon (the perfect place for an alchemist to hide in plain sight) with detours to Paris and Prague.

But this year, I couldn’t travel. That led to an unexpected result: I let go of my outline more than I ever have before. Instead, I let my characters lead the way in this book. Dorian Robert-Houdin (alchemist Zoe Faust’s living gargoyle best friend) insisted on having his own point-of-view chapters for the first time, which were a lot of fun to write.

I’ve never been good at sticking to one genre. THE ALCHEMIST OF FIRE AND FORTUNE is a paranormal culinary cozy treasure hunt adventure. When I began writing my Accidental Alchemist series, I didn’t think I was writing it for anyone besides myself. I had just turned 36 and been diagnosed with breast cancer, which turned my life upside down. I had a full year of cancer treatments ahead of me, and with my immune system shot, I spent a lot of time inside my house and threw myself into my writing.

I wrote the book I wanted to write (a wisecracking gargoyle, alchemists, magicians, a traditional puzzle plot mystery, recipes), even though I didn’t think it would sell. I was so surprised when my agent loved what I’d written and sold it quickly. THE ALCHEMIST OF FIRE AND FORTUNE is the fifth book in the Accidental Alchemist series, and I’m even more comfortable now letting my characters guide the story I want to tell in each book.

Here, blackmail, Oregon Gold Rush history, and a treasure hunt take Zoe, Dorian, and their friends on an adventure across Oregon.

I read widely across mystery sub-genres, and Elizabeth Peters is the author who inspired me most. Her books are globe-trotting adventure mysteries filled with humor and romance, and I loved that she didn’t conform but just told brilliant stories. I discovered her books in high school, and when I began writing in my 20s, I knew I wanted to write in the same style as her books but with my own twist. I was thrilled I got to meet her at a signing shortly before she passed away. I was able to tell her how much she inspired me to become a writer and that my debut novel, inspired by her Vicky Bliss adventures, was coming out later that year.

Gigi Pandian is the USA Today bestselling and multiple award-winning author of the Jaya Jones Treasure Hunt mysteries, the Accidental Alchemist mysteries, and locked-room mystery short stories. Her works have won Agatha, Anthony, Lefty, and Derringer awards, and her debut novel was awarded the Malice Domestic Grant. Gigi is the child of anthropologists from New Mexico and the southern tip of India, and spent her childhood traveling around the world on their research trips. She now lives in Northern California with her husband and a gargoyle who watches over the backyard garden. THE ALCHEMIST OF FIRE AND FORTUNE is the fifth in her Anthony Award-winning Accidental Alchemist series, and Under Lock & Skeleton Key is the first in her new Secret Staircase series coming in March 2022 from St. Martin’s Minotaur.