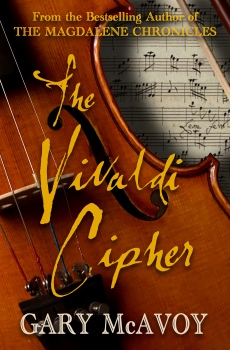 During the papal conclave of 1740, violinist Antonio Vivaldi is given a devastating secret by his dying mentor, the man favored to be elected Pope before he was poisoned. Fearful of the Italian Camorra, Vivaldi hides the secret in a special cipher in his music—a cipher revealing a breathtaking centuries-long operation of art theft from the Vatican Museum.

I’ve long been fascinated with the Vatican and its treasures in the Secret Archives and museums.

Researching the violinist and composer Antonio Vivaldi—despite being a longtime fan of his music—I was shocked to learn that he was also a Catholic priest, and that most of his life was spent teaching violin to orphaned girls in Venice.

Robert Ludlum, Steve Berry, James Rollins. They’ve written compelling international thrillers in the same style I do, and I get great inspiration from their work.

Gary McAvoy is a veteran, entrepreneur, and author of several books, including his bestselling thriller series The Magdalene Chronicles, comprising The Magdalene Deception, The Magdalene Reliquary, and his latest novel, The Magdalene Veil. His nonfiction work And Every Word Is True has been hailed as a sequel to Truman Capote’s landmark book, In Cold Blood. Gary is also a professional collector of ancient manuscripts and historical documents, much of which informs his writing projects.