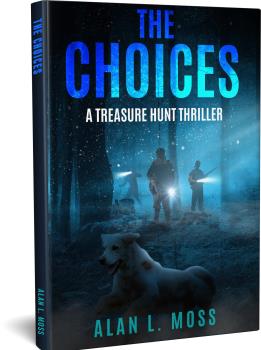 THE CHOICES is a story about determined individuals faced with decisions that will set the course of their future. They fight prejudice, violence, and natural hazards in attempts to fulfill their hopes and dreams. Love, hate, revenge and a quest for a fortune in ancient diamonds provide the action and emotion for this thriller, with elements of science fiction, suspense, romance, crime story, adventure, and political commentary. The action spans three continents and six nations, offering colorful backdrops for the race to an unprecedented fortune in diamonds.

My initial objective was to write a unique treasure hunt thriller. The idea was to take an intelligent individual whose future seemed routine and create circumstances that opened him to totally new objectives and the danger and rewards of a treasure hunt. This was aided by including our sad reality of domestic terrorism and the hate that has advanced its impact. I hope that readers will have an enhanced view of our problem with white supremacy while enjoying the thrill of the treasure hunt.

The book’s presentation and analysis of the nation’s growing problems with hate and terror should make a valuable contribution to the thriller genre by linking it to a serious national crisis. At the same time, the gay relationship of the graduate student whose research enables the diamond expedition helps to normalize gay individuals. Thus, the genre allows the description of a wide range of human interests.

The biggest challenge was learning enough about the science of geology to create the conditions that would lead to finding and mining a unique fortune in diamonds. This was aided by a new theory of diamond formation advanced by scientists at Johns Hopkins and NASA’s recently released quality measurement research of the crater created by the asteroid that killed the dinosaurs sixty-six million years ago. I was able to put it all together and develop a reasonable potential for locating and extracting incredibly valuable stones.

I was surprised that recent developments in geology supported the thinking behind locating and mining the treasure in diamonds.

As with each of my thrillers, the protagonist is educated and driven to reach outside his routine environment to oppose forces that are far superior.

One of the more interesting subplots concerns two independent women who have lost their loved ones to the financier of the diamond research. They join forces and risk their lives to get revenge.

David McCullough and Dan Brown are the two authors that set the standard to which I aspire. Whether it’s McCullough’s sweep and vitality or Brown’s nail-biting suspense, they create text that I hope to emulate.

Q: How was an economist able to create a complex scheme in geology?

A: Months of research and good luck with new developments that fit the objective.

Alan L Moss, Ph. D. is a unique and emerging voice in commercial fiction. His published novels spin sophisticated tales of conspiracy, politics, adventure, love, sex, revenge, and subterfuge. His protagonists are educated people driven to reach outside their routine environments to oppose forces that are far superior.

Before devoting his efforts to writing books, Alan was chief economist of the US Department of Labor’s Wage and Hour Division, Congressional Fellow to the late US Senator Frank R. Lautenberg, and Adjunct Instructor in Economics at District of Columbia area universities. Alan continues to utilize his background in economics as an expert witness on various labor issues, especially those concerning prevailing wages. He has written a number of published op eds, diagnosing some of the nation’s most serious problems and suggesting means to improve our national life.