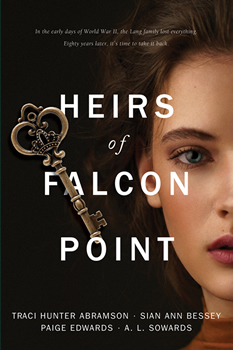 A group effort between four authors leads to historical intrigue in HEIRS OF FALCON POINT.

The Nazis have taken control of Austria, and wealthy widower Leopold Lang faces a difficult decision: join the ranks of the foreign power that has taken over his homeland or flee with his children to safety. Leopold makes his choice—but too late. His family is ripped apart, never to be reunited. But decades later, fate brings together the descendants of this broken dynasty in the place where it all began—Falcon Point.

Anna, Cole, and Tess have never met, each relying on fractured pieces of information to understand their Austrian heritage, but when unforeseen opportunities draw these Lang cousins to Falcon Point, they soon discover they are not alone in their quest to claim the coveted property and the fabled treasure hidden within. Unfortunately, another claimant, one with a much darker heritage, is determined to eliminate the Lang family once and for all.

The Big Thrill checked in with one of the authors, Traci Hunter Abramson, to learn more about the project and how four separate authors were able to come together to make it happen.

How did the project first come together?

The original idea came from Paige Edwards around the same time our friend Sian Bessey was coming to DC with her daughter. On our drive from Stafford, Virginia to DC to meet up with Sian, Paige explained the concept of this multi-generational story, beginning with a World War II family and morphing into a continuation with three descendants in present day. As Sian describes it, “I’m not sure Traci and Paige even said hello before they started telling me about this book we had to write.”

Most of our visit to the Air and Space Museum that day revolved around our plot and how we could give life to Paige’s idea. During that visit, we all agreed that the perfect author to write the World War II section was A. L. Sowards, who is both a talented author as well as someone who had already written quite a few novels set in that era.

With four authors involved, can you discuss the process you took to create the story?

We started out with a lot of planning and brainstorming sessions. A. L. Sowards wrote the historical segment and gave each of us suggested backstories for our characters. Those evolved for some of the authors based on what they envisioned for their modern-day characters. After reading the historical portion, Paige then wrote the first section of the contemporary section, followed by Sian and then myself.

HEIRS OF FALCON POINT was originally supposed to be a series of connected novellas with all of us contributing to the final conclusion. When it was my turn to write the last section, the pacing didn’t feel quite right, so I ended up adding a villain point of view and chose to weave my portion of the story throughout Paige’s and Sian’s sections. This led to adding some of Paige’s scenes in the latter sections and having Sian write scenes that wove through my portion.

Were there challenges to incorporating that many voices into one narrative?

Keeping the pacing consistent was probably the biggest challenge, but we had the advantage of being able to use the other three authors on the project as beta readers. Giving each other input was invaluable in making sure the flow between different sections was seamless. We also had all three authors from the contemporary section contribute to the climax and resolution scenes, which helped keep the continuity going. We even had A. L. Sowards write a portion of the conclusion to make sure her voice was also represented.

Can you talk a little about the book’s time and setting? What inspired you to choose it as a backdrop for your story?

The story begins in 1940 in Austria at a fictional estate called Falcon Point. Paige is an interior designer by trade, so she went looking for a location in Europe where railroad lines could be added to justify putting a resort there. Paige said she approached the setting “how a modern-day builder would look at it.” She based the house itself off a family estate called Calendar House in Falkirk, Scotland. Paige had just been there six weeks earlier.

Independently, A. L. Sowards did her own research and chose to set the historical portion in 1940, so it would be shortly after the Anschluss. She and Paige worked together to create the setting that ultimately became the framework for much of the novel. Other sections were set in Amsterdam (Sian’s section) and Vienna (my section). We were fortunate that all of us have either traveled to or researched the various locations, so it was easy to work together on those settings.

One of the unique situations arose because I’m former CIA. Because the plot was interwoven with all four authors, we had to send the entire manuscript to the agency’s publication review board for approval before we could submit it to our publisher. So even though my co-authors (Sian, Paige, and A. L.) have never worked for US intelligence, they’ve now been cleared by the CIA.

The biggest challenge came from trying to coordinate with four authors as we interwove the plot to make a cohesive story. The biggest opportunity came from relying on the strengths of each author to make the book more than it would have been from any one of us alone.

Traci Hunter Abramson was born in Arizona, where she lived until moving to Venezuela for a study abroad program. After graduating from Brigham Young University, she worked for the Central Intelligence Agency, eventually resigning in order to raise her family. She credits the CIA with giving her a wealth of ideas as well as the skills needed to survive her children’s teenage years.

She loves to travel and enjoys coaching her local high school swim team. She has written more than thirty best-selling novels and is a seven-time Whitney Award winner, including 2017 and 2019 Best Novel of the Year.

Sian Ann Bessey was born in Cambridge, England, and grew up on the island of Anglesey, off the coast of North Wales. She left her homeland to attend Brigham Young University, where she earned a bachelor’s degree in communications, with a minor in English. She began her writing career as a college student, publishing several articles in various magazines. Since then, she has published historical romance and romantic suspense novels, along with a variety of children’s books. She is a USA Today best-selling author, a Foreword Reviews Book of the Year finalist, and a Whitney Award finalist.

Sian and her husband, Kent, are the parents of five children and the grandparents of three beautiful girls and two handsome boys. They currently live in Idaho, and although Sian doesn’t have the opportunity to speak Welsh very often anymore, llanfairpwllgwyngyllgogerychwyrndrobwllllantysiliogogogoch still rolls off her tongue.

Paige Edwards is an award-winning author of contemporary Regency romances with a side order of suspense. She holds a degree in interior design and has worked professionally in that field. Due to her strong British roots, Paige’s books are often set in the UK, and she hops the pond whenever she gets the chance. She is Lady Paige Edwards when in Scotland, but her favorite title is Grandma.

A. L. Sowards has always been fascinated by the 1940s, but she’s grateful she didn’t live back then. She doesn’t think she could have written a novel on a typewriter, and no one would be able to read her handwriting if she wrote her books out longhand. She does, however, think they had the right idea when they rationed nylon and women went barelegged.

Sowards is the author of multiple historical fiction novels, with settings spanning the globe from the fourteenth to twentieth centuries. Her stories have become Whitney finalists, and she has won a Whitney Award, reached the number-one spot across multiple Amazon categories, received praise from the Historical Novel Society, and been loved by readers from a variety of backgrounds.

She lives with her husband and three children and has called Washington State, Utah, and Alaska home. She enjoys hiking and swimming, usually manages to keep up with the laundry, and loves it when someone else cooks dinner. She doesn’t own a typewriter, but she does own a pair or two of nylons.