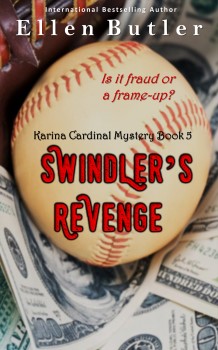 There are no softball cases in the FBI…especially when an agent gets dirty.

Karina Cardinal’s Saturday starts out with a bang, and it’s not the home renovation marathon she’s watching on HGTV. It’s the FBI banging on her door, hunting for a fugitive. As if she could easily hide one in her modest condo. Especially one named Mike Finnegan.

The two of them called it splitsville a couple months ago, but Mike? Take a $1.2 million bribe? No and no and no. No matter how much damning evidence the feds claim to have. When a mysterious burner phone shows up in her pocket, Karina has no doubt who dropped it there. Mike is deep undercover and so far off-grid, he needs help to figure out who’s framing him—and why.

Classic Karina, she jumps in with both feet, ignoring the dangers. The trouble with leaping before you look? You can land in a world of dirt. And when an old enemy starts playing hardball, you can end up six feet under it.

Since this is a series, characters and location are already established. I knew FBI Mike was going to be in trouble and need Karina’s help. I also had vague ideas that a money launderer would play a role. With small bits of the plotline forming in my head, I reached out to an FBI contact who once worked white collar crime. After laying out my ideas, my contact sent me in the direction of Operation Bullpen, a 1990s investigation into a group of individuals forging, fraudulently authenticating, and distributing sports memorabilia. The plotline spun out from there.

On her path to solve the mystery, Karina visits some interesting DC tourist locations, including the Franklin Delano Roosevelt Memorial, The Jefferson Memorial, Cherry Tree Walk, and Nationals Baseball Stadium. I’d be giving away too much by telling you what Karina is doing at these notable monuments, but let’s just say, it isn’t to take in the sights.

I remember the first time I read Nine Coaches Waiting by Mary Stewart. It reminded me of the dark suspense created by Daphne du Maurier’s Rebecca. However, whereas du Maurier’s purposely unnamed protagonist spends much of her time wringing her hands and behaving foolishly, Stewart’s Linda Martin takes an active hand in mitigating the unknown threat that lurks in the shadows. While I enjoy both authors’ abilities to create suspense, it is Stewart who takes me on an escapade filled with action. I have taken a page out of Stewart’s books by regularly putting my character, Karina Cardinal, on a thrilling action ride of adventure in every novel.

Ellen Butler is the international bestselling author of the Karina Cardinal mystery series and award-winning historical suspense. Fans who enjoy the suspense of Melinda Leigh and the humor of Janet Evanovich’s Stephanie Plum will fall in love with Butler’s Karina Cardinal. Her experiences working on Capitol Hill and at a medical association in Washington, DC inspired the mystery-action series. Ellen lives with her family in the suburbs of Washington, DC.