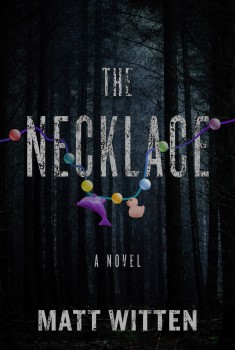 Susan Lentigo’s daughter was raped and murdered twenty years ago—and now, at long last, this small-town waitress sets out to drive all the way from upstate New York to North Dakota to witness the killer’s execution. But she discovers shocking new evidence on her journey that leads her to suspect the condemned man is innocent—and the real killer is still free. Even worse, her prime suspect has a young daughter who’s at terrible risk. With no money and no time to spare, Susan must uncover the truth before an innocent man gets executed and another little girl gets killed.

Matt Witten recently spent some time with The Big Thrill discussing his latest thriller, THE NECKLACE:

Nine years ago, I read an article in the Glens Falls Post-Star about a woman from a small town in upstate New York who was holding a fundraising event at a local bar. She needed money to travel to the upcoming execution of the man who had raped and murdered her young daughter twenty-two years before.

Everything about this story stuck with me: not only the tragic death, but also the woman’s dire circumstances and her quest to find justice and closure two decades later.

For years I wanted to write a novel about this, but I didn’t know what the story would be. Then one day I was having coffee with a writer friend, John Henry Davis, and he suggested: “What if the guy who’s being executed maybe didn’t do it?”

And that’s how THE NECKLACE was born.

The two biggest challenges were also the two biggest opportunities: understanding how people can be so mistaken about the ones we love and writing the novel in two different timelines, twenty years ago and the present.

I don’t often find thrillers, or other novels, that are set in economically disadvantaged small-town America. THE NECKLACE tells the story not only of one courageous woman but of life in the foothills of the Adirondacks, where I’ve spent a lot of time for the past thirty-five years, including living there for ten. The area has struggled in this new century, with factories and mills shutting down and tourism not quite filling the economic gap. And yet people continue to cobble livings together, raise their families, and work for a better future. Susan, the diner waitress who’s the heroine of THE NECKLACE, is a composite of several women I’ve known in the Adirondacks.

When crime novels are about a parent whose child has been killed, usually the novel focuses on their desire for revenge. THE NECKLACE starts there, but then goes in a different direction.

Several of the characters in THE NECKLACE are inspired by real-life people. FBI agent Robert Pappas is based on my friend Paul Bishop, an LAPD sex crimes detective for seventeen years who became a crime writer. I used to teach playwriting at the Hudson Correctional Facility in Coxsackie, New York, and Curt Jansen is inspired by one of my students there, a dignified man in his thirties who had been in prison for murder for fifteen years and preferred to be called Mr. Smith instead of by his first name. The relationship between Susan and her mom—the good part, not the guilt-ridden part!—is inspired by my wife’s relationship with her mother.

Throughout my life, two writers have inspired me the most: Dr. Seuss and Elmore Leonard. Dr. Seuss wrote with such freedom and wealth of imagination and I believe has had a tremendous, underappreciated impact on so many writers who came after him. Elmore Leonard wrote with such economy of language and such wonderful realistic dialogue that I still marvel when I reread his work today.

Q: THE NECKLACE has been optioned for film with Leonardo DiCaprio attached as producer. What was that process like?

My book agent Josh Getzler sold the novel to Oceanview Publishing, and meanwhile, my film/TV agent Paul Weitzman sold the screenplay to Leonardo DiCaprio’s production company Appian Way and Cartel Pictures. It was cool, a lot happening at once.

I got notes from the Appian Way and Cartel folks for a screenplay rewrite, and I thought they were really smart; I agreed with all of them. Same with the notes I got from Oceanview for revising the book. I was able to execute the notes to everybody’s satisfaction, so I feel very fortunate with the collaborations and the process.

Matt Witten is a TV writer, novelist, playwright, and screenwriter who has been writing for television for the past twenty years, including such shows as House, Pretty Little Liars, Law & Order, CSI: Miami, Medium, JAG, The Glades, Homicide, Judging Amy, and Women’s Murder Club. He has written four mystery novels that were published by Signet: Breakfast at Madeline’s, Grand Delusion, Strange Bedfellows, and The Killing Bee. His movie Drones, produced by Whitewater Films, premiered at the AFI Film Festival, the Austin Film Festival, and the London Film Festival. His stage plays The Deal, Sacred Journey, Washington Square Moves, and The Ties That Bind have been published by Samuel French and Dramatists Play Service and produced throughout the world. His new novel THE NECKLACE has been optioned for film by Appian Way and Cartel Pictures, with Leonardo DiCaprio attached as producer.