Tread Carefully into the KILLER’S VAULT 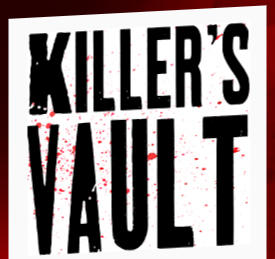 This podcast is not for the squeamish. But neither are serial killers. Like “True Crime” on steroids, KILLER’S VAULT dives into the chilling inner thoughts and psyches of America’s most notorious serial killers. But beware, the content is disturbingly explicit.

The goal of the podcast is to better understand a serial killer’s mind, to both aid law enforcement in their capture and to hopefully prevent the development of future serial killers.

Episode One, launched on June 28, introduces the “Killer Clown” John Wayne Gacy. He tortured, raped, and murdered 33 boys and men—burying 29 of them under his home in Norwood Park, Illinois, while his wife and two stepdaughters lived in the home. It’s followed by six Season One installments covering Richard Ramirez, Gerard Schaefer, David Alan Gore, and “Toolbox Killers” Lawrence Bittaker and Roy Norris. Subsequent seasons will cover serial murderers such as Charles Manson and David Berkowitz, among others.

Creators of the podcast have amassed more than 10,000 personal letters, artwork and journal excerpts, manuscript drafts, and hundreds of hours of intense and private phone recordings by the killers. Most of the documents were collected by former NYPD detective Rob Webb and married couple Richie and Barbara Dickstein, who were riveted by the minds of these murderers and wanted to discover what motivated them to kill.

Richie and Barbara Dickstein shared a fascination with serial killers and competed in an obsessive game to see who could “get closer” to America’s most famous murderers. The Dicksteins corresponded with Gacy between 1991-1994 and compiled hundreds of letters and hours of recorded phone conversations.

Richie lured the serial killers into his own trap by pretending to be riveted by their sexual deviancy so they would share their inner thoughts and desires with him. Gacy was obsessed with Richie. They talked about having sex, both with each other and with other men.

Rob Cea—former NYPD officer and detective, co-Founder of Killer Bunny Entertainment, and executive producer—chatted with The Big Thrill about the motivation for the podcast, the documents collected, and why we’re fascinated by serial murderers.

What was the inspiration for the podcast?

The Dicksteins collected 10,000 never-before-seen intimate personal letters, hundreds of hours of private and extremely vivid phone recordings, profound artwork and journal excerpts, and unpublished books, all created by the killers. It’s extraordinary to see how they let their guard down in these letters, and some of them told about crimes they’d never admitted.

Where did the personal documents (letters, journals, recordings of phone calls) from and about the serial killers come from?

The personal documents were from Richie and Barbara Dickstein, as well as Rob Webb, based in Denver. Between the three of them, for over 20 years, they communicated with at least 100 of the country’s most ­vicious serial and celebrity murderers—including John Wayne Gacy, Jeffrey Dahmer, Richard Ramirez, “Son of Sam” ­David Berkowitz, Charles Manson, Arthur Shawcross, Edmund Kemper, Karla Faye Tucker, Robert John Bardo, and Gerard Schaefer.

Owners and curators Dr. David Adamovich and Lynn Wheat, as well as Rob Webb, have carefully cataloged and archived the contents of the Dicksteins’ collection with meticulous detail.

Why did the Dicksteins and Webb correspond with these notorious killers for 20 years? Was it only “the game” they were playing?

The Dicksteins first wrote to Son of Sam around 1992. It was Barbara’s idea because she knew someone who had narrowly missed being a Berkowitz victim. Richie was a corrections officer, and they were both curious about the minds of killers. The letter-writing took off and continued until they stopped around 2005.

For Rob Webb, his experience was different. He grew up in similar circumstances to many of the murderers, and he wanted to understand why they became serial killers and he did not.

How does Rohm’s experience with violence against a family member motivate her research?

At 14, before Rohm was born, her uncle was violently killed by a friend. Even though her family never really addressed that violence, the murder deeply affected Lis. It was an emotional experience that she wanted to understand and learn more about—why people murder. She developed a desire to understand the criminal mind.

Is it distressing to Rohm and Roberts that Richie led on the killers he engaged with, pretending to desire participation in homosexual acts while talking to Gacy, and fabricating interest to get intimate information?

The content and the amount of detail in the letters and the bond Barbara and ­Richie managed to develop with the serial killers shocked Rohm and Roberts; however, they were not distressed about their desire to participate and the approach used to engage with the murderers. These infamous killers were twisted humans, and to communicate with them and get into their minds, it was sometimes necessary to play to their desires and entice them to respond.

Serial killers are fascinating, and many people know of their crimes, but very few know what drove them to kill. Richie and Barbara found a way to step into their thoughts and feelings, and their persistence impressed Rohm and Roberts.

It is notable that Rob Webb, who corresponded with many of the same killers as the Dicksteins, never played to their desires. He simply corresponded with them—which worked for him and the serial killer(s) because his childhood experiences were so relatable to many of these killers.

Why does society have a fascination with serial killers?

Humans try to make sense of their actions and the actions of people around them. Serial killers intrigue society because we want to make sense of why they do such horrible things to people who are, more often than not, complete strangers. With the KILLER’S VAULT podcast, society can finally step into the killer’s mind and better understand the reasoning behind their killings.

There is also the fear factor. Many people like to hear scary and horrible stories; that these stories are true makes them that much more captivating. Serial killers have been the focus of many books and films, and many people use the Hannibal Lecter character as a prototype for serial killers, which in most—if not all—cases, is totally wrong. However, these films and books regarding serial murderers have portrayed them in an almost anti-hero fashion, which many people believe. Again, this cannot be further from reality.

Are all serial killers sociopaths or psychopaths?

No. Psychopaths are born with abnormal brain function—“nature.” Sociopaths are created through upbringing and environment—“nurture.” To become a serial killer, you don’t need to be both; however, there have been many serial killers who were diagnosed with both disorders.

An example of a serial killer who was not a sociopath is Jeffrey Dahmer. He came from a normal loving household and was considered a good friend and a loving son who displayed no outward narcissism or other sociopathic traits. He did, however, hide his psychopathic tendencies, which manifested throughout his childhood by killing animals and lighting fires, amongst other things associated with early psychopathic behavior.

Dahmer could conceal these acts from his parents and friends until his parents divorced. When the divorce occurred, those psychopathic traits took control of his brain, and he began killing to lash out from the anger and betrayal he felt.

What do you hope to accomplish with the podcast?

By sharing the stories of these monsters, we hope to understand this phenomenon boldly and fully, and someday break the chain.

The podcast is a call to action. If you’re an adult or a parent or a responsible human being, hopefully the podcast will educate you enough to identify certain behaviors, traits, or precursors that indicate potential serial killers before they become active.

We hope the series will educate folks enough to raise their awareness of those things that “make a monster.” If a child or young adult who is displaying those traits is identified early enough, they can be helped. That is our ultimate goal.