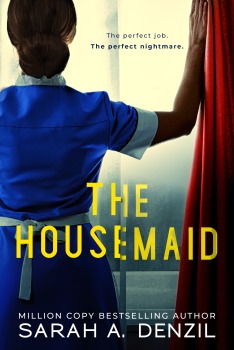 It seems like the perfect job. Great wages, accommodation provided, and all located within the walls of Highwood Hall, a stunning stately home owned by the Howard family. Not many little girls dream of becoming a maid, but this is an opportunity for me to get back on my feet. And for me to revisit my past…

But I soon realise I’ve made a mistake. The strict housekeeper, Mrs. Huxley, watches my every move, emerging from the shadows when least expected. Lord Howard’s son, Alex, takes an interest in me, and as a former addict, I find myself drawn to him because I know he’s bad for me. There’s a general atmosphere of unease at Highwood Hall, from the narrow tunnels laced throughout the sprawling house, to the abandoned north wing, rumoured to be haunted. It’s easy to imagine the secrets hidden within these walls, like the secrets I hold close.

On my first day, I receive a mysterious package. I open up the pretty gift box to find a miniature doll version of me trapped inside a dollhouse. In this scene I’m dead, lying in a pool of red paint at the bottom of the perfectly recreated staircase. Someone sent this threatening diorama to me, but who even knows I work at the hall? And what do they want?

I know only one truth: my perfect job is turning into my perfect nightmare.

Sarah A. Denzil recently spent some time with The Big Thrill discussing her latest thriller, THE HOUSEMAID:

It was the plot for me, but it took a long time to settle where it did. I had one idea for a psychological thriller, but the more I thought about it, the more I felt as though it wouldn’t work as a book. Gradually that plot idea morphed into THE HOUSEMAID, and then along came the characters and the lovely Gothic setting. 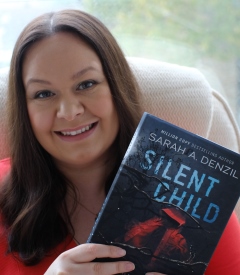 I loved writing a main character who breaks the general archetype for a psychological thriller. She’s young, just twenty-one, working class and street smart. In the direst of circumstances, she doesn’t just fight for survival, she starts the fight.

I’ve always been a fan of dark, Gothic fiction. From Bram Stoker to Iain Banks, I love atmospheric books with suspense. Since the explosion of psychological thrillers from Gone Girl onwards, I’ve devoured books by Gillian Flynn, SJ Watson, and Mark Edwards.

Sarah A. Denzil is a million-copy bestselling author of psychological suspense novels. Her books include number one bestseller Silent Child, which was a Goodreads Choice semi-finalist in 2017. Her books have been published in several different languages and have appeared on the Wall Street Journal bestseller list.

Sarah lives in Yorkshire with her husband and cat, enjoying the scenic countryside and rather unpredictable weather. She loves to write moody, psychological fiction with plenty of twists and turns.