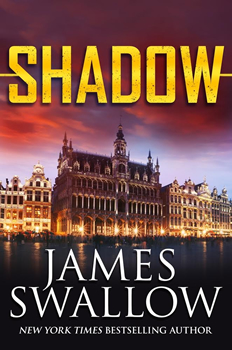 Marc’s partner in the field is Lucy Keyes, a former Special Forces sniper, and together they are drawn into the hunt for a missing scientist Lucy once helped defect from North Korea, and the dark legacy she left behind.

As they travel from Southeast Asia to Iceland and across Europe, Marc and Lucy uncover the scheme of a murderous ultranationalist who is planning lethal biological attacks in North Africa and Europe to escalate division and cause chaos.

Though the novel has been released in the UK, it makes its US debut this month. In this interview with The Big Thrill, Swallow talks about what it’s like to have multiple releases and provides insight into this fourth installment in his bestselling Marc Dane series.

The opening sequence with the refugees shows great detail about emigration—what can you tell us about the topic and its inclusion in the novel?

I had two goals with that opening sequence, which tells the story of a group of refugees intercepted at sea by a private, extralegal “deterrent” ship; it’s inspired by a news story I read about a real-world far-right activist group who were intercepting migrants and sinking their boats. Firstly, I wanted to introduce the characters of Marc and Lucy on an undercover mission, putting them in a different kind of situation from previous books, and secondly I wanted to build in background for the political and social themes that underpin and drive the story throughout SHADOW.

What is the major change we can see in Marc Dane since the previous book?

I try to make Marc’s character grow from book to book—too often the main characters of these kind of thrillers are static, so while the circumstances they encounter change, they never do. Marc Dane has grown from the reluctant protagonist first seen in Nomad, a guy who tried to stay on the safe path through life, into someone who is fulfilling his potential as an action hero by the time we meet him in SHADOW. He’s learned to fight a little better, he’s taking charge of his life, but at the same time he’s still trying to overcome his flaws, and he still has room to evolve. Marc is too reckless for his own good, and he’s always in over his head, so things are never easy for him. I like a hero who has to work for their victories.

The main antagonist, Noah Verbeke, seems to be an obsessed fascist, even bordering on an over-the-top bad guy. What can you tell us about him?

I firmly believe that you need a well-drawn foe for your heroes to work against, so I do my best in all my books to create villains who have depth and a motivation that feels credible. Every antagonist thinks that they are the hero, that they are right, and Noah Verbeke is no different. I did a lot of research into far-right, authoritarian ultranationalists to get a shape for his character, and what I came across was compelling and dramatic, but not in any way “fun”—if anything, I had to tone down some of the exemplars I read about from the real world. It was important for me to create a villain who is odious and unredeemable, but who is also understandable. You may hate the guy, but you can see what has made him who he is.

In a twist of fate, we have life imitating art with a world suffering a pandemic—but SHADOW was written before that. Here’s a double-barreled question: How did the idea first originate, and how has COVID-19 affected its release/promotion?

SHADOW was written in 2018, well before the advent of COVID-19, but the concept of bio-weapons as a tool for terrorism has long been an ongoing concern. I chose to draw on the idea as the main threat for the novel after reading about the effects of the 2013 Ebola outbreak in West Africa, which in turn lead me to research the Marburg hemorrhagic fever and the story of the Vektor laboratory in Russia, where an accidental outbreak of a weaponized virus allegedly took place. The concept of bio-terrorism is frankly chilling, but in fiction it makes for a compelling menace for our heroes to oppose.

As for how COVID has impacted the release and promotion of my books—one thing about lockdown is that people have been reading more, so the online conversation has been strong! But the downside means that I can’t take part in author signings or conventions like ThrillerFest, et al. Virtual events are a fine substitute, but there’s something special about being in a room with readers, editors, and other authors that is hard to replicate digitally. I do hope we can find our way back to in-person events soon.

The novel features multiple characters’ points of view. How do you determine which ones are necessary?

Marc Dane is the central character of these novels, but he’s not the sole focus. I’ve always felt it’s important to build a supporting cast of strong secondary and recurring characters to support the lead, and also to make sure that any third-tier characters have a definite arc throughout a book. In developing my characters, I work up a sketch of who they are and some threads of backstory, along with ideas on how to evolve them through the novel. This might change as I write—sometimes I “find” a character’s voice in the process and go back through the work to bring it all into line.

As for determining which character’s point of view is necessary for a given scene, some of that is down to blocking—the question of who is in a sequence and where they’re going in it—and other times it is to help illustrate a given plot point or character beat. Generally, I go by instinct as to who will be the best “viewpoint” for any given scene.

SHADOW was released internationally before its US release—how was the reception abroad?

Good! One of the challenges of writing an ongoing series is keeping the momentum up after multiple books, and also finding ways to develop the characters in new and interesting ways, so I was very pleased when readers and reviewers responded positively to the evolution of Marc Dane, Lucy Keyes, and the other members of the team throughout SHADOW’s events.

The Marc Dane series has five books (the fifth not yet released in the US)— are there more books planned? Where can we see him and the “Special Conditions Division”?

As I write this, I’m finishing up the final check on the page proofs for Book #6 in the Marc Dane series, and I’ve approved the cover art, so that will be officially revealed very soon, with a release planned for late 2021. Beyond the sixth book, I have more ideas for future stories about Marc and his colleagues, so if readers want to see his adventures continue, I’ll be happy to write them.