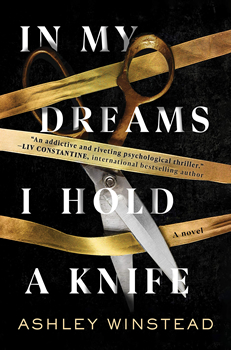 Ashley Winstead’s debut, the hauntingly titled IN MY DREAMS I HOLD A KNIFE, introduces us to Jessica Miller, an ambitious woman going to a college reunion with a hidden agenda—to prove to her former classmates at Duquette University that she’s made it in life.

Growing up, Jessica thought you earned love by being excellent, and the more accomplished you became, the more lovable and therefore happier you’d be. And while that’s relatable for many, this is a murder mystery—and as such, the reunion soon transforms into a search for the killer of one of the East House Seven.

Winstead says the novel “is about letting your ambition and desire for success warp your brain until you’ll do anything to win, about feeling so desperate to matter that you’ll sacrifice people to climb to the top. And at its deepest level, it’s about the fear of dying as a small, unimportant person who fades from memory, almost like you never existed. Jessica Miller never allows herself to be an artist, but as you can tell, she’s full of an artist’s anxieties.”

The idea for this novel came to Winstead during a dark time in her life, compounded with a real career low. As she watched some of her Pitch Wars cohorts signing with agents and getting book deals, she wrestled with the fear that it would never happen for her. Of course, it did.

“I’m resisting the urge to dismiss those past feelings with jokes about how dramatic I was,” she says, “how that’s just another day in the life of an author. Very true! But I’ll honor my past vulnerability by taking it seriously. I leaned into the feelings instead of repressing them and started to picture a woman who simply couldn’t abide failure, because it was such a threat to her identity and worldview. I had a very vivid image of her poring over her face in the mirror, searching for flaws; pulling a brush through her hair, winding the weak pieces around her fingers until they tore. And that’s how Jessica Miller was born.”

The fictional Duquette University is based on some real-life universities like Vanderbilt, which Winstead attended as an undergrad, but also Duke and Wake Forest. She’s familiar with the experience of elite Southern universities and has spent countless hours cataloging their pros: they’re physically gorgeous, often modeled in architecture after other famous universities and buildings around the world; they attract top-notch faculty and students, and they’re usually big party schools to a degree that other colleges of their academic caliber aren’t.

“Even Greek life is still huge at these schools, despite becoming passe in other places,” Winstead says. “The more I thought about it, the more I realized there was nowhere else this story could take place. Think about how many schools call themselves ‘the Harvard of the South.’ Elite Southern colleges are all about striving, just like Jessica, and they have such a chip on their shoulder about being as good as the Ivies. It kind of permeates the student body, too, which I explore in the book. They’re like a physical manifestation of Jessica’s brain.”

The East House Seven is the name other Duquette University students gave Jessica and her friends after a rather ridiculous stunt they pulled their freshman year. These six other students—Frankie, Mint, Coop, Heather, Caro, and Jack—are Jessica’s best friends.

“Meeting them is both the best and worst thing that’s ever happened to her,” Winstead says, “because on one hand, they give her a place to belong for the first time in her life, and together, they’re a force to be reckoned with on campus, so they make her valuable by association. But on the other hand, they’re also people who have things Jessica wants, so her genuine love for them is mixed with envy and bitterness. I think we all have that experience with friends from time to time, but Jessica has it over and over, to the point where you can see it driving her mad.”

The author drew on some of her own experiences as a student, particularly with Greek life, to the point that several scenes depicted in the novel were based on things she’s witnessed. She graduated during the Great Recession, when competition and fear about securing jobs and other opportunities was at a fever pitch.

“I did a lot of research into Wake Forest and Duke—not just the campuses themselves but the student experience,” she says. “I did this through reading message boards, some of them archived (the Wayback Machine can be a writer’s best friend). It was amazing to remember how high emotions were dialed up—the sheer anxiety and desire on display in these message boards. My copyeditor and I also did a lot of research into North Carolina since the book is set there—we wanted to get the feel and details right.

“I’ve seen Animal House and Revenge of the Nerds, and I would challenge anyone who says those films haven’t shaped our collective social imagination about college. Even if you think those movies are caricatures, they’ve created this fantasy about college life that real college experiences have a hard time living up to. And college failing to meet expectations is a big theme in the book.”

Keen readers will notice the title of the book, IN MY DREAMS I HOLD A KNIFE, is shown on the cover along with a pair of scissors, almost as a contradiction. In reality, they complement each other, after a fashion.

“The scissors on the cover are an allusion to the murder weapon and a wink at ribbon-cutting ceremonies,” Winstead says. “But the knife of the title is the knife of Jessica’s ambition, and it haunts the book from the first chapter to the last, kind of an invisible presence. She finds herself imagining how to cut things from people, cut into people, tear them apart. The dreams in which she holds a knife are both nightmares where she’s haunted by guilt and fantasies of wish fulfillment. I love the tension between the knife and the scissors because the questions the story circles are, What is Jessica is capable of? What’s this guilt eating at her? And that’s all I’ll say to avoid spoilers!

“One last thing I’ll say is that there’s a love story in the book—I’m mentioning it because I’m a fan of romance and mystery, so as a potential reader, I’d want to know! I’ll know I’ve made it as a writer if one day, readers care enough to ship my characters. That’s my goal. A girl can dream.”