Boiling It Down to Basics 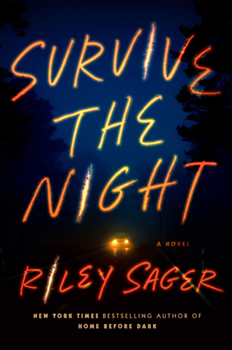 Burnt out both physically and emotionally by the pandemic but still facing a deadline, Sager knew he couldn’t churn out another Home Before Dark—not if he wanted to keep his sanity. The novel, though it met with critical acclaim, involved a complicated story-within-a-story plot that threw twist after twist at its readers.

“It about killed me,” Sager says. “People love it. The response has been overwhelming, which is wonderful to see. But I hated writing it. It was…difficult.”

In fact, there came a point when Sager doubted he had the time—or talent—to do the story justice. As it turns out, Sager had more than enough chops to get the job done (and done well!), but having not yet recovered from the writing marathon it took to meet his deadline, in addition to the daily grind of COVID-19, Sager was in the mood for something…simpler.

“So, I tried to come up with an idea that boiled down to the basic elements,” he says. “A girl, a killer, and a car. And then I put them on the highway at night.”

Stripped down, yes, but no less taut. Sager flexes his impressive skill in SURVIVE THE NIGHT by creating a suspenseful road trip book that, at times, seems much larger than life. That’s by design, though delving too far into the why of that constitutes a major spoiler.

Instead, let’s look at what we do know.

To steal from the book jacket description (because it sets the perfect tone), “It’s November 1991. George H. W. Bush is in the White House, Nirvana’s in the tape deck, and movie-obsessed college student Charlie Jordan is in a car with a man who might be a serial killer.”

Sager picked the year 1991 for a few reasons. First, he liked the idea of setting the book in a time period that had affected him so personally—the music, the movies, the lack of technology. He can recall so much about that era, in particular that specific year, that no research was required. It was the year Nirvana exploded onto the pop culture scene, and the memories from those days led to the book’s opening pages.

“One of the first scenes I envisioned while outlining the book was two people in a car listening to Nirvana on the tape deck,” he says. “Specifically ‘Come as You Are’ because I love the intro.”

He picked his protagonist’s occupation—a film studies major—for similar reasons. Sager himself was a film studies major and figured Charlie would have similar film tastes. The novel is a treasure trove of movie references—and an eye-opening portal to classic thrillers and horrors that were released in that year. Again, no research required.

“I won’t say I was lazy,” Sager says. “There was a lot going on in the world, and I had to deliver another book, and so I needed the easiest, most enjoyable, stretch-free way to get that accomplished while the world was on fire.”

Sounds reasonable. So Sager even took his characters on the same road he’s driven dozens of times to visit his family—though always without incident. In truth, it’s not an especially dangerous stretch of highway, so ratcheting up the tension while keeping the plot simple was one of the challenges of the book.

“I had to try and figure out the most suspenseful way to keep two people in a car,” he says. “It was so much fun to come up with all the reasons Charlie couldn’t leave.”

SURVIVE THE NIGHT is a non-stop thrill ride. Once the characters are in the car, Sager hits the gas and speeds us through to an ending that may not quite have all the twists and turns readers have come to expect from this award-winning author. That’s okay—it’s not meant to.

“SURVIVE THE NIGHT is not a mystery,” he says. “It’s meant to be a fun, one-sitting read. It was me trying to stretch my legs a little and do something I haven’t done before.”

Which is the approach he takes in all his work, including his next project.

Sager has already turned in his 2022 release, and he’s not only zipping his lips on the plot, he’s locking them and throwing away the key.

“I literally can’t share anything about this book,” he says. “I don’t even know how they’re going to promote it before its release.”

Ah, the words of a true thriller writer—keeping us in suspense for as long as possible.