Over to the Dark Side 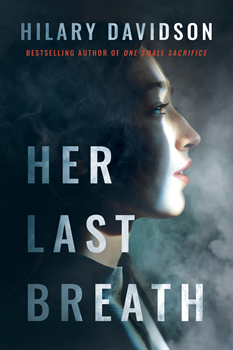 It was a dark time. Everything had started falling apart around Hilary Davidson. Four close friends had told the award-winning novelist their marriages were in ruins.

She hadn’t seen it coming. Any of it.

“It was really shocking to me that so many of them had stories of abuse.”

One friend so feared her spouse that she talked of hiding notes around her house to find in case she suddenly died. Another friend was imprisoned after attempting to kill his spouse.

“I thought I knew him really well. It still shocks me to the core.”

Her friends’ stories “amazed me about what’s going on behind closed doors.” And that gave her an idea. Their lives became the dark origin of her new psychological thriller, HER LAST BREATH.

Davidson’s main characters are from two different families who suffer from emotional trauma. “It’s about expanding the lens looking at family abuse,” she says.

A woman who struggled with personal demons growing up in their dysfunctional family, Deirdre is the only one who suspects something is afoul with her sister’s death. She immediately zeros in on her brother-in-law. The young and healthy Caro, married to Theo, son of a hotel magnate, dies while jogging in New York City, according to security camera footage. Dierdre, Caro’s once estranged sister—we did say a dysfunctional family here—is determined to grant her dead sister’s dying wish and get to the bottom of her mysterious death. Problem is, Deirdre’s the only one convinced it’s mysterious.

HER LAST BREATH is Deirdre’s story, which begins with her receiving a posthumous email from her sister, saying if anything happens to her…

Deirdre is seeking revenge and ends with a determination to find the truth. Her investigation takes both Deirdre and Theo to places they never intended to go and their discoveries along the way are not what either had in mind, and “mind” is the key word here. Both tormented by their abusive pasts, these adversaries’ lives struggle to move to an inevitable clash that suddenly isn’t what you expect.

“I want to start a conversation with books,” Davidson says. “I want to make people think…I think you have to talk about topics like forgiveness…There’s no way you can cut all of the abuses out of society so how do we live with them? How do you heal old wounds? That is something I hope people will come away thinking about.”

Ever since her Anthony Award-winning first novel, The Damage Done, in 2010, Davidson, who grew up in Toronto and now resides in New York City, has become known for her plot twists. HER LAST BREATH doesn’t break ranks with her reputation.

Davidson began her career writing travel articles. “I was a travel writer who didn’t go on any glamorous trips.” Instead, she sat at home in Toronto and pitched stories about her hometown for a year and a half. When she was finally noticed, she was invited on all-expense-paid group travel writer junkets as well as solo trips. She eventually found herself writing travel books for Frommer.

“I love to travel. To me, I can’t understand people who don’t want to travel. I want to go everywhere and see everything. I want to share things.”

Her travels have given her a treasure trove of haunting and hilarious experiences. As a young woman traveling alone, she’s gotten used to pick-up lines in hotel bars, even from fellow writers and photographers on press junkets with her.

Does she ever feel threatened traveling alone? She laughs, noting her diminutive and calm appearance. She has been a master of martial arts since a very young age. She’s not one to be messed with. Successfully, anyway.

She uses those same qualities to make characters in her novels often do the unexpected.

From her vast worldwide travels, Davidson has fallen in love with hotels. “They are great for secrets. That’s where people meet if they’re having illicit affairs. There are all kinds of shady behaviors. You’re away from home, and you can be a very different person and be who you want to be. I’ve always been fascinated by what happens beneath the surface.”

And that’s what you’ll find in HER LAST BREATH. Characters you think you know but really don’t. Much like her friends over the past few years whose marriages disintegrated. We all keep secrets, and Davidson loves to explore beneath them.

“I’ve had the chance to live different lives doing different things. Being a travel writer exposed me to so many things I wouldn’t have seen otherwise.”

“When you’re on a press trip, the dynamics in the group mean you get to know some of the people really well,” she says. Photographers are especially notorious, she says. They can be very aggressive. She even included a pick-up line about one experience in her 2013 novel Evil in All Its Disguises.

They were sitting in a hotel bar in Mexico one night. “His modus operandi was to ask me if I would pose nude for him. Then he says, ‘It’s okay, I’m in an open marriage.’”

It was too good a line to pass up, and she laughs about it today.

Travel writers have their share of bad actors. Every few months, Davidson says she would hear stories of writers trashing their hotel rooms, stealing the furniture and drinking every ounce of alcohol that popped up within arm’s reach. Some hotels blacklist these so-called journalists, but others fear being blacklisted themselves by the writer and take no action.

All of this, of course, serves as inspiration for Davidson to dig beneath the surface of her characters’ personalities so she can explore and open the conversation. The pandemic also helped, and she includes references to it throughout her new novel.

“Most writers do not want to touch it with a 10-foot pole,” she says. “While I am writing fiction, I do want to ground it in the real world as much as possible.”

She wanted to acknowledge the communal experience. “I feel the isolation due to the pandemic worked for the characters in this book.” During lockdown, she says, they could keep their dark side under wraps. “It kind of fit with the mindsets in a dark and appropriate way.”

When asked, she says, a lot of writers say they write to entertain. She wants to do more than that. In HER LAST BREATH, Davidson wants to bare her soul a bit more to explore the underbelly of character and abusive emotions to make her readers think. Baring one’s soul, after all, is a lot more interesting than having to bare all.

Unless, of course, you’re a travel photographer.