Finding a Home for the Darkness 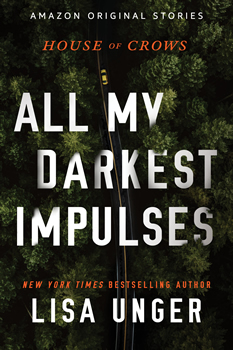 It’s no secret Lisa Unger is passionate about writing.

With each novel, she pushes herself to be better, to tell the story in the most authentic, most page-turning way possible. And this consistent honing of her craft continues to pay off.  Last year’s Confessions on the 7:45 has been nominated for an ITW Hardcover award—Beautiful Lives was nominated in 2007—and in the past few years, Unger has been racking up accolades for her shorter fiction, proving she has the chops to tackle—well, anything.

No doubt her latest release—HOUSE OF CROWS—will continue to earn her the well-deserved praise as one of the genre’s best.

In this four-part thriller collection—“All My Darkest Impulses,” “Fog Descending,” “Circling the Drain,” and “Love the Way You Lie”—four friends reunite at a home from their shared past to finally put to rest the dark and haunting memories implanted in each of them decades earlier.

The collection is part of a new initiative from Amazon Original Stories, which has been publishing bite-sized and binge-worthy content from big name authors, sort of like Netflix for books. HOUSE OF CROWS isn’t Unger’s first foray into short fiction—a previous title, The Hollows, is a novella—nor her first time working with Amazon. She wrote a short story for a Halloween collection that went on to be nominated for an Edgar award.

“I’d written short stories before,” she says. “But the last two releases have just made me fall in love with the form in a new way.”

The collection evolved the same way all of Unger’s books do: the spark of a story, fueled by the voices in her head, and then she’s in full-on pantser mode until the end. Even then, it takes her a little time to process what she has written and what the story is truly about.

In this interview with The Big Thrill, Unger digs a little deeper in HOUSE OF CROWS and the characters she brings to life in each of the four chilling parts.

We’ve spoken before about how all of your stories seem to stem from an initial idea. What can you share about the origins for HOUSE OF CROWS?

I had a very loose idea and a title, and I just started writing. I knew that the four stories would each feed into the individual characters, connecting all of the pieces, and then there would be one final story to connect it all. I had the characters’ voices in my head and it kind of evolved for me from there the same way all of my stories do—on the page.

Given the structure of the series—four connecting stories—did it affect your process?

It’s very exciting when you can do something different, but it didn’t feel like a short story to me. It just kind of told itself to me in scenes. I knew I wanted to take time and understand the characters and figure out how the overarching story fed into their personal narratives—and their relationship to the house, this entity from their past.

Speaking of that entity, Merle House is such a “presence”—not to sound cliché, but it truly was like a character in itself. What was the inspiration for it?

The house…I still don’t completely understand it. I have great admiration for The Haunting of Hill House, the book, and one of the things I love is that Hill House is a “thing” and yet it means something different to everyone who goes there. Everyone brings their own thing to it. Some people are more vulnerable than others. A haunting is like a virus—you may catch it or you may not. At the end of Hill House, you still don’t know what the fuck happened. I love that. I wanted HOUSE OF CROWS to be about the relationship the characters have with the house, without it being too much about that, because it’s really about those characters and what they bring to the house. Their experiences.

In 2016, we moved into a new townhome, and we had the opportunity to design it. We picked out everything. It was a very stressful move—non-stop problems. Everything was hard. I pay attention to that stuff—I kept wondering, are we doing the right thing? Was someone trying to keep us from the house? On the first night, in a brand new house, I was unpacking the toiletries and I cut my finger really deep. It bled and bled into the sink, circling the drain. And I thought: if this house was haunted, that would be the first thing that would happen. It would want to drink my blood. That kind of struck with me.

My family still teases me about my love of crows—they’re such an interesting and creepy bird. And I love that the name Merle actually means “black bird.” What are your thoughts on crows and the role they play in HOUSE OF CROWS?

They’re very interesting birds—they have a different level of intelligence, they hold grudges, they’re attracted to shiny objects. But people have a general, awful, distrust of them. They represent a kind of darkness—and darkness has to live somewhere. It needs a home.

Last Girl Ghosted comes out in October, and it’s about an advice columnist that gets pushed into online dating. She meets a guy, and she thinks he might be The One. But then…he disappears.