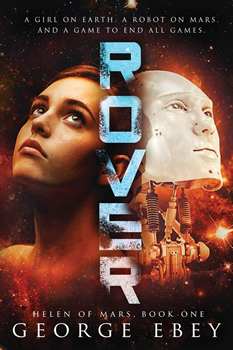 At the start of ROVER by George Ebey, Helen Hunter is just a techie teen who likes to play online games, build custom robots, and test her skills in the occasional gaming competition. But when her mother falls ill, putting the entire family’s future at risk, she finds herself on a path that will take her beyond online games to Mars, where a shady corporation called MARSCORP has a fleet of rovers mining ore controlled remotely by freelance operators on Earth. And Helen’s parents, desperate for the money to pay medical bills, have signed a contract for their own rover, putting everything on the line to cover the cost of it.

After discovering a group of thieves who control their own rovers and prey on unsuspecting miners—including her own family—Helen engages the help of her best friend Misty to take down the bad guys.

George Ebey first developed a passion for storytelling during college, when a creative writing course led him to produce a fully edited portfolio of speculative fiction stories. Since then, he has written numerous works in multiple genres and has had stories published in several anthologies.

ROVER involves humans—“gamers”—on Earth controlling robots on Mars. What inspired that idea? Is George a gamer himself?

“I was fascinated by rovers like Opportunity and Curiosity,” Ebey says, “which managed not only to arrive safely on Mars but function for years. I remember thinking how fun it would be to control my own rover and use it to explore the planet. That was the genesis of the idea. When I started piecing the story together, the thought of people using their rovers like avatars in a giant game seemed like the most interesting idea to explore. I’m not the biggest gamer in the world, but I do dabble, and I had a lot of fun immersing myself into the culture once the story began to take shape.”

The remoteness of Mars, a new frontier, and the mining component—with good guys and bad guys—give ROVER the feel of a Western novel.

“I’m a big history buff,” George explained, “and the story of America’s westward expansion in the nineteenth century has always intrigued me. In ROVER, the characters start out using their avatars to mine for ores on Mars. I thought about the gold rush and the conflicts people faced during that chapter in history with things like claim jumpers and cutthroats and I imagined what it might be like if my characters were put through a similar struggle. With that, my version of Mars became a sort of surrogate for the Wild West, which is something I had a ton of fun with.”

One of the rovers is named Wells Bradbury. How did the works of H. G. Wells and Ray Bradbury inspire Ebey as a writer?

“I have a great deal of respect for both authors. Wells’s War of the Worlds is one of my favorite books of all time, and Bradbury’s The Martian Chronicles was one of my first glimpses into what Mars might look like as told through the lens of a master world builder. I knew I wanted to name a rover after a classic work of literature that had a Martian theme and these two works, and their authors, immediately sprung to mind. Plus, their names just meshed well together. Wells Bradbury has a nice ring to it.”

The main characters in ROVER are teenagers, basically assuring the book will be labeled by some people as Young Adult. What’s in it for more grown up readers?

“True,” Ebey says, “ROVER can be considered a Young Adult book. It’s told mostly through the point of view of characters in that age group. But from the start, it was important to me that the story possessed a sort of tonal appeal that could be enjoyed across various age groups. It’s meant to be a fun, swashbuckling adventure that everyone can enjoy. Also, at its core, ROVER is about one family’s struggle to make a living in a chaotic world, and I think that’s something grown up readers can relate to.

“And besides,” he adds, “who doesn’t like a good robot fight?”

I asked Ebey at what point did he realize he probably had a “Helen of Mars” series on his hands?

“The Helen of Mars series started life as a short story in an anthology called Brave New Girls. Almost immediately, I knew that this was a much bigger idea than one story could contain. By the time I finished the short, I already had a plethora of thoughts about how to expand the world into something that could sustain many stories. That’s exciting to me because I have big plans for future stories set in the Helen of Mars universe.”

Finally, I asked Ebey if he could put together his dream panel for ThrillerFest—participants need not be still with us to qualify—who would be on the panel and why? What would the topic be?

“Wow,” he says. “The budding historian in me feels that I should populate the panel with people who are no longer here, just so I had a chance to meet them. I think I would like to choose authors who have written about Mars over the years, and the topic would be to talk about their version of Mars and how the times they lived in help shape their perceptions of the Red Planet. I’d definitely include H. G. Wells and Ray Bradbury for reasons we’ve already covered. Edgar Rice Burroughs could cover the turn of the century with his Barsoom series. Robert A. Heinlein could do mid-century with Stranger in a Strange Land. Then maybe Ben Bova could finish up the century with his works Mars and Return to Mars. The whole thing would be a who’s who of notable dreamers of Mars, and I could be there to soak it all in. That would be something.”

On the Cover: Daryl Gregory