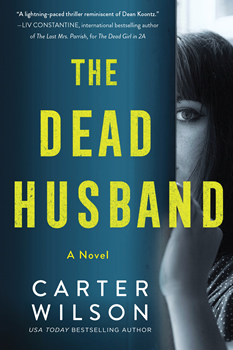 Some successful authors knew they wanted to be writers from the time they were old enough to hold a pencil. Some discovered a passion for stories as young adults and charted a course toward publication, while others pursued a long-deferred writing dream after retirement. Bestselling thriller writer Carter Wilson did it by accident.

“I was a 33-year-old real estate consultant with no creative writing background of any sort,” he says. “I was sitting in a bleak and dingy meeting room in a Ramada taking an eight-hour continuing-education class. Bored to death, you can imagine. So I made up a murder-mystery riddle and wrote it on a piece of paper, figuring the process of solving it would help pass the time. I kept working at the riddle when I got home, then for days afterwards. Paragraphs turned into pages, pages into chapters. In 90 days, I had a 400-page manuscript. I was like, What the hell? That was 18 years ago, and I haven’t stopped writing since.”

From that unplanned foray into the literary world, Wilson went on to be an ITW Thriller Award finalist, a four-time winner of the Colorado Book Award, and the recipient of multiple starred reviews from Publishers Weekly, Booklist, and Library Journal. He’s also contributed short fiction to various publications, including the R. L. Stine young adult anthology Scream and Scream Again.

He writes an hour a day, seven days a week, sometimes with a cup of coffee, sometimes with a cocktail. Little by little, the manuscript grows, and 10 to 12 months later, it’s finished. Through this steady, measured process, Wilson has completed seven critically acclaimed, standalone psychological thrillers, including The Dead Girl in 2A, Mister Tender’s Girl, and his latest, THE DEAD HUSBAND, which USA Today bestselling author David Bell calls “a perfectly paced and expertly written thriller.”

In fact, the book is so tightly crafted that, when he says he wrote it without a plan, it seems almost impossible. But when asked about his writing process, he affirms, “I don’t outline, so I had no idea what the story was going to be about.” In fact, he still writes the same way he did 18 years ago: he thinks of a riddle or an opening scene and dives in.

“With THE DEAD HUSBAND,” he says, “the opening scene that came to me was this: Rose Yates, age 35, stands in front of the massive wooden front door of the mansion in which she grew up. The same house in Bury, New Hampshire, where she was raised by a wealthy, controlling, morally dubious father. The house she shared with her older sister, Cora, with whom she was close until Cora began to change into someone unrecognizable. The house Rose fled at the age of 18 because of the horrible event that took place within the mansion’s walls. She’s returned because her husband just died of an overdose of prescription sleep medication and alcohol, and she needs help. But returning home might be the worst decision she’s ever made. That was the scene that popped into my head, so I wrote it and then spent the rest of the book discovering what it was Rose was running from, what really happened to her husband, and most of all, what this dysfunctional and disturbed family would do to protect one another.”

This is the fourth book Wilson has written primarily from a female perspective.

“I love writing from POVs different from my own, because it allows me to escape into another voice, and I can avoid the issue of a character sounding too much like me,” he says. “I find when writing thrillers from the POV of a gender different from mine, I try not to overthink things. When my character is facing extreme peril, I don’t think What would a woman do here? I think, What would anyone do here?”

The result is a complex woman with foibles, flaws, and a traumatic past. Rose’s gift for self-destruction seems limitless. Yet she’s a loving mother to her son, Max, who—though it’s never explicitly stated—seems to be on the autism spectrum, and she somehow maintains a kernel of optimism, despite a strained relationship with her rigid, distant father, a cutting rivalry with her sister, and the suspicions of a detective who believes her husband’s death was neither suicide nor accident. Intermittent third-person chapters from the detective’s point of view provide an effective contrast to Rose’s dysfunctional past and give the story added depth.

Asked to describe his favorite scene from the book (without spoilers), Wilson says, “There’s a scene of utter heartbreak pretty far along in the book, and I love the rhythm of the words in those few pages. I look at most of my writing with disdain, but sometimes the cadence hits just right, and when the flow of the words mixes with extreme emotion, it just works.”

There’s a poetry to Wilson’s writing, and like many authors, he honed his ear for language by reading other authors. “Cormac McCarthy’s The Road taught me that words are malleable, sentences have no rules, and an entire setting can be viscerally described in the length of a Tweet. Word economy, word innovation, rhythm, and the beauty of stark, dark language.”

This interest in other authors and their work led Wilson to another endeavor: his podcast, Carter Wilson’s Making It Up.

“I love discovering who people are,” he says, “and I equally despise idle chit chat. I’m a guy who asks strangers at a cocktail party to tell me their deepest fears in order to avoid small talk. So I wanted to talk to writers of all backgrounds and understand who they are as people, what made them do what they do, what struggles they’ve had to overcome, and how their minds work. So with no stock questions prepared, I spend 40 minutes or so digging deeply into the psyches of my guests. To add to the fun, at the end of the conversation, we pick a random sentence from a random book from my shelves and create an impromptu short story together. It usually ends violently.”

Next on Wilson’s docket is a “companion thriller.” The New Neighbor, scheduled for release next April, is set in the same town and even the same house as THE DEAD HUSBAND, but has an entirely different set of characters. Wilson says, with a hint of mischief, “It has elements of The Shining and The Haunting of Hill House, so, yeah, it’s kinda dark.”