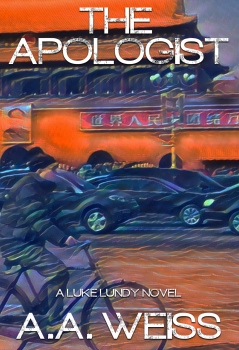 As the ex-assassin, Luke Lundy, transitions to a government job behind a desk, he grows increasingly disillusioned by the errors in judgment made by the last five presidents. He works tirelessly to reverse the negative impact of American actions abroad, but his new bosses only see a paranoid former field operative no longer interested in protecting his country.

And yet, one newly-elected Congressman believes that Lundy should be the lead operative for a bare-bones mission to prevent an international incident in China. Given a plane ticket and complete operational independence, Lundy is tasked with a three-day-mission to locate Patrick Allred, an American teacher who disappeared in Beijing after run-ins with organized crime and secret police.

Using decades of his covert experience, Luke Lundy tracks his target through a web of human traffickers, designer drug dealers, and corrupt government officials. Saddled with a partner he doesn’t trust, leads that don’t make sense, and each new clue indicating a set-up, Lundy aims to locate the missing person while fighting his own old habits—like killing to stay alive.

A.A. Weiss recently spent some time with The Big Thrill discussing his latest thriller, THE APOLOGIST:

The setting and character came simultaneously as I was traveling in Beijing, visiting schools, and answering questions from students and fellow teachers about America’s role in the world, past, and present. The plot came along slowly over the next three years.

The biggest challenge (and opportunity) was developing an alternative world of Washington, DC government in which these characters could operate.

The book takes a stab at decolonizing the American spy novel experience, focusing on the criminal actions of Americans abroad and preventing the negative impacts of those actions.

No quick rebounds from physical violence, and no decisions without moral consequences. Getting punched in the face hurts. One smack stays with the character until he can get to the ibuprofen a couple chapters later.

It’s a love letter to modern Beijing. My first book was a travel memoir, and I wanted to continue sharing the experience of visiting a new place with the readers of this novel.

Recently, American Spy by Lauren Wilkinson. The novel is structurally brilliant, and presents setting as vividly as I’ve seen in a thriller. The Miernik Dossier, by Charles McCarry, is another personal favorite for its structure, humor, and its story that sets aside good vs. bad and allows the characters to live complete lives while attending to the business at hand.

What’s the overlap between writing a travel memoir and espionage thrillers? Exciting locations and honest depictions of human behavior; in both worlds, all actions have consequences.

A.A. Weiss is the author of the Luke Lundy thriller series and the travel memoir Lenin’s Asylum. His essays and short stories have appeared in various journals and twice received special mention in the Pushcart Prize Anthology. A recipient of award grants from the Bronx Council on the Arts and the Maryland State Arts Council, he lives with his family in Silver Spring, Maryland.