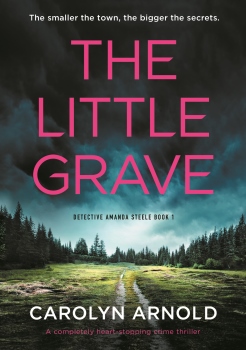 It’s been five years since Detective Amanda Steele’s life was derailed in the path of an oncoming drunk driver. The small community of Dumfries, Virginia, may have moved on from the tragic deaths of her husband and daughter, but Amanda cannot. When the driver who killed her family is found murdered in a motel room, she can’t keep away from the case.

A renewed awareness that we all possess incredible strength within ourselves—even when affected by great loss or tragedy and times are truly dark. I think Amanda’s story also reminds us to be patient and forgiving with ourselves because healing takes time.

Some of the characters in this book showed up in another series of mine, but I was meeting a lot of characters for the first time, including the lead, Detective Amanda Steele. Her voice came to me rather distinctly and fast, but there’s always a challenge to understanding new characters. It’s like when you meet someone in real life—it takes time to get to know them.

I learned that it takes a lot of booze and time to die of alcohol poisoning. It’s also more commonly an accidental death. As a murder method, it’s unpredictable, and the killer needs to be willing to sit there and wait it out.

David Baldacci and Sandra Brown! Baldacci has a way of really introducing you to his characters. He provides lots of description and background. His characters feel real. With Sandra Brown, I’ve always admired her way of just putting it all there and not being afraid or bashful of saying anything.