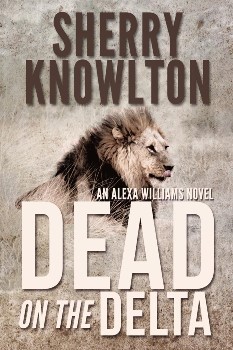 When Alexa Williams agrees to spend four months doing lion research with her boyfriend Reese, she looks forward to witnessing the elemental life and death struggle of the African wild. But she never imagines she’ll become one of the hunted on the famed Okavango Delta. In the latest Alexa Williams suspense novel, the kick-ass lawyer tangles with elephant poachers and conservation politics on the African continent.

Sherry Knowlton recently spent some time with The Big Thrill discussing her latest thriller, DEAD ON THE DELTA:

While reading DEAD ON THE DELTA, I want people to focus on the story and become swept up in the suspense. However, I hope that most readers will walk away with a better appreciation for the wild beauty of Botswana’s remote Okavango Delta, which I did my best to convey in words. I also wanted to educate readers about the danger that dwindling wild animal populations face from multiple fronts, including poaching, habitat encroachment, human conflict, and a changing climate. I’d like nothing better than for readers to finish the book and decide to take a safari or contribute to an elephant or lion conservation organization.

The biggest challenge was setting DEAD ON THE DELTA entirely in a foreign country. Although in previous books in the Alexa Williams suspense series, I’d sent my protagonist to East Africa and Italy, the core action in the earlier novels takes place in my home region of south central Pennsylvania. I’d been to Botswana and elsewhere in Africa on safari multiple times but realized that there were many aspects of day-to-day life, history, government, and more that I needed to write about with accuracy. That’s where this book presented a wonderful opportunity. My husband and I spent a fantastic month in Botswana and Zimbabwe doing research while on safari, exploring the town of Maun (gateway to the Okavango Delta), and spending time in the capital city of Gaborone.

In DEAD ON THE DELTA, my protagonist, Alexa, is in Botswana with her boyfriend, who works as a lion researcher for a wildlife advocacy organization. Although I’ve seen scores of lions on safari, I realized that I knew very little about what a lion researcher does in the field. An Oxford University-affiliated program called WildCRU was gracious enough to allow me to spend several days in the bush with a young woman who does lion research in their Trans-Kalahari Predator Programme. Robynne Kotze taught me so much about lions, the issues big cat populations face to survive, and her life as a lion researcher. I couldn’t have done justice to that critical aspect of DEAD ON THE DELTA without Robynne’s and WildCRU’s assistance.

Sherry Knowlton is the author of the Alexa Williams series of suspense novels including Dead of Spring and Dead of Winter. Passionate about books at an early age, she was that kid who would sneak a flashlight to bed at night so she could read beneath the covers. All the local librarians knew her by name. When not writing the next Alexa Williams thriller, Knowlton works with her health care consulting business or travels around the world. She and her husband live in the mountains of south central Pennsylvania.