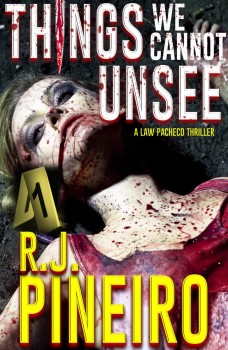 A heinous crime.
A terrifying discovery.
A detective on the edge.

NCIS Agent Lawson Pacheco is scarred to his soul from the violence he has witnessed while serving his country in the War on Terror. There are things that Law has seen that fuel his nightmares—things he cannot unsee.

But nothing prepares him for the grisly homicides of his brother-in-arms, Navy Commander John Casey and his family—the only family Law has ever known. Working with fellow agents Mia Patel and Beatriz Howard, Law launches an investigation that, on the surface, suggests Casey butchered his family before eating his gun—further suggesting this to be a tragic case of a PTSD-triggered murder-suicide.

Casey had recently blown the whistle on his superior officers for war crimes committed three years before in Syria—crimes that Casey claimed the Navy tried to cover up. When an unexpected discovery in the forensics work challenges the official Navy report, Law is propelled into the netherworld of the opium trade, sex trafficking, and corruption in the ranks that costs him and those he loves. But he won’t stop digging—he can’t stop—even when the answers threaten to consume him . . .

THINGS WE CANNOT UNSEE is the shocking psychological thriller of a man haunted by his past while searching for the truth—a truth that comes at a price he may not be prepared to pay.

“…Pineiro doesn’t pull any punches as he expertly blends action and character. This complex, intelligent, and suspenseful thriller marks its author as a significant talent.”
—Publisher’s Weekly Starred Review

This is a psychological thriller that provides a window into NCIS operations and forensics work (quite different from what is portrayed on TV) as well as the secret connections between America’s wars (particularly those in Vietnam, Iraq, and Afghanistan) and the worldwide drug trade.

The enjoyment of crafting thrillers that will challenge the reader’s mind with unexpected twists and turns. Nothing is as it seems in THINGS WE CANNOT UNSEE, from the very first page to the last.

The research opened my eyes to the secret connections between the wars America has fought overseas and the drug trade. For example, during the Vietnam war, drug smugglers used military planes to transport heroin out of South Vietnam. Same thing is happening now out of Afghanistan with opium.

Although the hero of the story is Law Pacheco, he is surrounded by a diverse cast of characters, from the feisty NCIS Agents Mia Patel and Beatriz Howard, to Law’s fiancée, Frankie Hope, and the tough-as-nails Addana Johnson, the African-American US Marine who saved Law’s life in Afghanistan.

Douglas Preston, not only one of the masters of the genre, but a hell of a nice guy. Doug has been a source of support during most of my career, which is now approaching 35 years.

Ward Larsen, another great guy, terrific writer, and former military pilot. His Assassin series is a source of inspiration.

David Morrell, another master of the thriller world. His early work (The Brotherhood of the Rose, The Fraternity of the Stone, and The League of Night and Fog) had a strong influence in helping me develop my own literary voice.

Q. Why must some of your best characters have to die? You make us fall in love with them, and then you kill them. Why?
A. Although this is fiction, I try to inject a heavy dose of realism into my stories, and in real life people die, especially those in high risk professions, such as our military and law enforcement. So, yes. They do have to die in my stories just as they do in real life.

R.J. Pineiro is a 30-year veteran of the computer industry as well as the author of many internationally acclaimed novels, including Without Mercy, Without Fear, Without Regret, Chilling Effect, Avenue of Regrets, and Highest Law. His new novel is THINGS WE CANNOT UNSEE. Pineiro makes his home in Texas with his wife, Lory Anne.