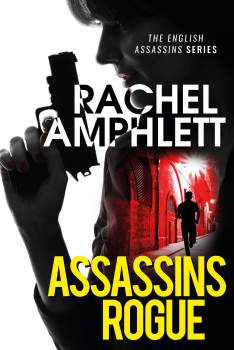 An injured pilot discovers Eva Delacourt’s safe house moments before dying from her wounds, thrusting the female assassin into a global conspiracy. Within days, a new war will begin in the Middle East, and Eva is the only person who can prevent it. In a race against time across a fractured Europe, and fighting a mysterious enemy working within the upper echelons of the British government, Eva must confront her past once more if she is to survive her mission.

Character – I had the idea of a female pilot turning up on Eva’s doorstep in Prague desperate for help, but no idea why until I started writing the story. I was as much in the dark as Eva to start off with!

It’s what I grew up reading – the first espionage thriller I read was Jack Higgins’ The Eagle Has Landed when I was about 11 years old, and I haven’t stopped since.

Readers first met Eva Delacourt in the serialized trilogy that kicked off the English Assassins series published in January 2018. The trilogy was published once per week, then as a complete omnibus so readers could either read an “episode” a week or binge the whole trilogy at the end – much like TV streaming services.

Readers have been asking for more stories featuring Eva since then, and ASSASSINS ROUGE is a new full-length story featuring all their favorite characters from the first three books.

It’s still unusual to have a female assassin leading a series, but Eva is not alone in her role – she is supported by a small secretive team called The Section. It’s important to me that my characters are not lone wolves – they may skirt close to it, but Eva needs the skills the others bring to the story. Using up to the minute research into technology and current affairs, ASSASSINS ROUGE is a blisteringly fast-paced read and the first full length novel in the English Assassins series.

I’m always amazed by some of the things I stumble across while conducting research – but much of it never goes into the book; otherwise I’d be accused of being too fantastical. 😉

There’s also the careful balance of not bogging down the pace with too many facts while letting the reader find out what really goes on behind the scenes in governments around the world!

I think ASSASSINS ROUGE is going to be an eye-opening experience for readers – I can’t wait to share it with them and hear their thoughts about the story. I want them to finish reading it and then think “surely that couldn’t happen in real life, could it?” and then have the same eyebrow-raising experience I did if they start digging into the facts!

Michael Connelly and Robert Crais are huge influences – obviously because of their storytelling skills but also because their writing continues to go from strength to strength with every new book. They’re still enthusiastic about what they do, and I want to be like that another 20 books from now. I mentioned Jack Higgins before, but I also enjoy thrillers by the likes of Daniel Silva, Frederick Forsyth, and Ken Follett, particularly the latter’s historical thrillers such as Hornet Flight and Jackdaws. Theirs are the books I’ll go back and read every few years and continue to learn from.

Before turning to writing, Rachel Amphlett played guitar in bands, worked as a film extra, and freelanced in radio as a presenter and producer for the BBC.

She now wields a pen instead of a plectrum and is a bestselling author of crime fiction and spy thrillers, many of which have been translated worldwide.

A keen traveler, Rachel holds both British and Australian citizenship.