The Consequences of Change 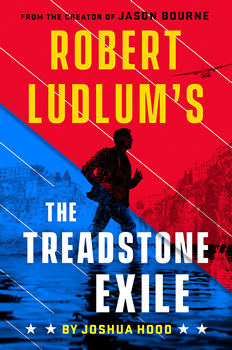 Joshua Hood returns to the recently established “Bourne-verse” in a second installment titled THE TREADSTONE EXILE. This time, former agent Adam Hayes retreats to Africa, determined to leave his profession behind. His decision is tested when he participates in a charitable mission that ends in disaster.

According to Hood, THE TREADSTONE EXILE is “about the quest for redemption and the problems that arise when a man tries to change his nature.”

Hayes finds refuge in the little-known city of Ceuta, a territory of Spain that lies on the African side of the Mediterranean Sea.

“I was looking for a lawless, frontier-type town, somewhere with a seedy underbelly,” Hood says. “Marseille would have been great, but it was too close to Europe and I wanted the book to take place in Africa. A few years ago, I’d read The Queen of the South by Arturo Pérez-Reverte and he talked about the smuggling routes from Spain to Ceuta.”

Hayes takes on a charitable mission to Burkina Faso, only be on the receiving end of an attack by extremists that forces his plane down. On his way out, he agrees to take Zoe Cabot, the daughter of a tech baron, to a small coastal city. Her kidnapping upon arrival leaves Hayes feeling responsible—and the troubles just keep on piling up from there.

Treadstone executive Levi Shaw is also back for this action-packed thriller—and there’s more to him than meets the eye.

“Adam Hayes and Levi Shaw are in transition,” Hood says, “and both find themselves trying to outrun the sins of the past while they move forward. Unfortunately, there are outside forces who don’t want this to happen.”

Being that this is the second book in a series, it came with its own set of challenges, which Hood says he took in stride.

“Treadstone Resurrection was difficult because there was a lot of world-building that went into that book,” he says. “A foundation had to be laid that dovetailed into the existing Ludlum universe, but at the same time, the book had to stand on its own. For THE TREADSTONE EXILE it was more about fleshing out the character arcs and finding a direction/future for Adam Hayes—which I found much easier.”

Hood admits that he loves the global espionage/thriller genre, even if it’s currently overflowing with big-name writers with bigtime skills who are writing at the top of their game.

“For a new author it is very hard to break out,” he says. “But writing under the Ludlum name has given me a place at the table. Whereas if I was writing that kind of book under my own name, I don’t think it would fly.”

The original novels from Robert Ludlum were big, bombastic affairs, written with a cinematic flair that garnered fans across the world for decades. Stepping into such large shoes is a task that Hood doesn’t take lightly.

“I knew going in that I couldn’t replicate Mr. Ludlum’s prose, but I tried to stay true to the heart of his books: the intrigue and action.”

He did a good job—and it stands to reason that Ludlum fans have embraced Hood with gusto.

“They have been very supportive,” he says, “and I’ve had quite a few reach out and tell me that they really enjoyed the new direction. I’d love to keep writing this series if they will have me.”

Between the Lines: Patricia Cornwell