From Space to Ground to Six Feet Under 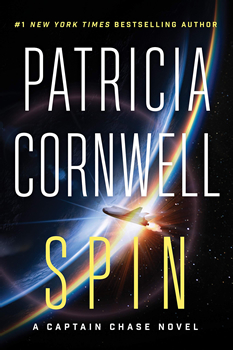 There’s not much difference between living through a pandemic and traveling to space, says New York Times bestselling author Patricia Cornwell. You can see through the window, but you can’t go outside. You can look, but you can’t touch.

“You eat a little, stretch your legs—but you’re not going anywhere for a while. You’re reduced to primary functions,” she says. “And when you’re up in a rocket or living on a space station, the environment is not very user-friendly—it’s not conducive to survival.”

Much like life on Earth outside our personal bubble these days.

That may sound bleak, but as Einstein once said, “The measure of intelligence is the ability to change.” Cornwell can relate—she’s made a lot of changes in the past 12 months, a number of them in response to the pandemic. (More on that later.)

“People are going to have to learn to adapt because some things may never be the same again,” she says. “But with every grim, if not horrendous situation, there are benefits to be found if you have an open mind.”

For Cornwell, that has meant looking up. Way up.

Captain Callie Chase came to Cornwell’s imagination younger and far less experienced than Scarpetta—in essence, Callie’s a grunt at NASA who has no idea how important she is. More of her character is revealed in this month’s follow-up release, SPIN, which picks up immediately after the startling cliffhanger Cornwell left us with in Quantum.

To reveal much of the plot would spoil not only this book but also the first in the series, so let’s just say that Cornwell ramps up the tension and suspense, reunites Callie with her sister Carme, for better or worse, and…takes readers to space. Yes, outer space.

Of course, Cornwell herself hasn’t rocketed through Earth’s atmosphere—yet—and as she points out, “I haven’t ever killed anyone either.” But Cornwell is famous for meticulous details that lend a sense of rare authenticity regardless of whether she’s dealing with dead bodies or space travel. SPIN continues that trend.

“From ground, to space, to six feet under, that’s my mantra,” she says. “I haven’t done a research trip in a year now, but I have enough in my database that I don’t have to.

“Not being able to smell the environment or touch things has meant I’ve had to rely on my imagination more. The pandemic has a bad side, yes, but there is good to be found and good we can make of it. My imagination is much more fired up, and I’m learning to live within my interior spaces more—in my mind and in my environment.”

Pre-pandemic is an entirely different story, though. After the release of Chaos—the 24th Scarpetta book—in 2016, Cornwell decided she needed a break from the morgue. Or, as she puts it, she got fired…by her protagonist.

“Sometimes you go through a dark period and you don’t understand why. And when you get fired by an imaginary character, things get pretty dark,” she says, admitting that she even considered giving up writing altogether. “Scarpetta told me I had more to learn, and so she sent me to space school for four years.”

There, Cornwell learned the ropes on all things space travel—she took a ride on a vertical launcher at the Kennedy Space Center, walked through crew quarters with astronauts, interviewed people who have actually gone into orbit, studied the limitations and possibilities of anti-gravity, and watched countless videos about the galaxy and beyond.

The research not only inspired Quantum and a feisty new character—it fueled Cornwell’s passion for outer space.

“I think space doesn’t always resonate with people because they think it’s elitist—that it’s only accessible to people who can afford rockets,” she says. “But there is a direct connection between our own flat feet on the ground and what goes on up there. It’s not even so much about space—it’s about the technology and realizing that science holds the answers. The DNA of all life forms on this planet is not much different. My DNA and the DNA of a fruit fly aren’t that much different—and people who know me won’t be surprised by that.

“We are all made of the same stardust, and we should all be curious about that.”

That may sound pretty heavy for a thriller novel—and SPIN is indeed a serious book with serious ramifications for the characters and the world they inhabit—but Cornwell has infused the story with humor, symbolism, and even a bit of camp.

“You don’t name a character Neva Wrong without being a bit tongue-in-cheek,” she says, laughing. “This is not a Ted Bundy procedural—but that doesn’t mean it isn’t gratifying.”

Cornwell’s writing has indeed spun in a different direction in the past four years, but heeding her character’s persuasive advice to take a break from the morgue has not only rekindled her passion for writing, but has even impressed Scarpetta. Enough so that she’s ready to come out of hiding.

Yes, you read that correctly—a new Scarpetta thriller is slated for 2021.

Though she’s keeping the finer details under wraps for now, Cornwell says the book will incorporate some of the new science she’s learned about while writing her Captain Chase novels. No, the characters won’t meet up—at least not on the page just yet—but “I can promise you it’s going to be worth it.”

We can hardly wait.