Obsession and Jealousy Are a Dangerous Duet 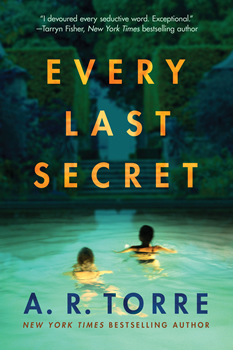 If you’ve ever been cheated on, EVERY LAST SECRET is dedicated to you.

Cat and William Winthorpe have everything: good looks, their own companies in Silicon Valley, a Maserati and Ferrari, a multi-million-dollar home, power, and elite standing in their über-rich San Francisco suburb. Who wouldn’t want such a luxurious life?

Enter Dr. Neena Ryder, the motivational coach William hires to improve morale at Winthorpe Tech. Cat isn’t sure what to think of Neena—she’s pretty, fit, and intelligent. But there’s also something about her that Cat doesn’t trust. Cat clawed her way up the social food chain, so she recognizes envy when she sees it.

Although Neena and Matt have been married since high school, Neena has never let Matt’s devotion to her impede her self-improvement. He’s supported her many plastic surgeries and new-wave diets aimed to keep her slim and sexy. But he’s never suspected the lengths to which Neena will go to get the life she knows she deserves. She’s skilled at pretending to be someone she’s not. Because William Winthorpe is “devastatingly handsome,” ultra-intelligent, and super rich, she’s on the right track to elevate her life, even if it means losing Matt.

Neena’s ready to claim her place in society, regardless of what she has to do to get there. But Cat has secrets of her own that she’s hidden well, and she aims to use them to protect what’s hers. Who will win and who will lose in this clandestine fight to claim a privileged life?

Remember: Before you try to steal a life, make sure you know your opponent.

Here, A. R. Torre speaks with The Big Thrill about what fueled her story, her obsessions, and her advice for writers.

What was your inspiration for EVERY LAST SECRET? Is it a story celebrating revenge, or a cautionary tale?

The inspiration came from a real-life scenario. My close friend suspected her husband of having an affair, and we became sleuths of sorts—a little obsessed with figuring out the other woman and her motivations and actions as our suspicions became reality. The experience gave me a front-row seat to the roller coaster of emotions involved in the different parties of an affair and caused a lot of moments of self-reflection in my own marriage. I continually examined what I would do in my friend’s position. Would I leave my husband? Would I tell the woman’s spouse?

As far as whether the story celebrates revenge or is a cautionary tale… it’s a little of both. There’s a reason for crimes of passion—love and jealousy are some of the strongest emotional triggers that exist, and this novel explores what happens when both are in play.

How do the issues of past trauma and self-esteem wind their way through the novel?

The characters’ backstories were important in this novel because their past and their current emotional health drive so many of their actions. A woman pushed to the edge acts and reacts differently than one who is emotionally content and secure in herself. Without giving too much away, I needed to create a very specific individual—Neena—and I needed her to be plausible. I knew from my experience that real-life Neenas exist, but I needed to prove that to the reader. I hope I accomplished that in these pages.

How did you “blur the lines” of reality until you “rubbed them into a different color”? How are the lines between heroine and villain blurred?

The best heroines have a bit of villain in them, and the best villains pull you into quietly rooting for them. I’ve always felt that way and always try to build my characters in ways that are complex and relatable. Many readers will start this story and hate all the characters. And I get that. In this book, even the “good guys” aren’t pure. Is anyone?

The lines get blurred in this novel early on. It’s interesting, because different readers associate with and root for different characters. Some hate the heroine more than the villain. But again, I return to my core belief and the theme that drives this story. Love and jealousy will change a person. Women will fight to the death for what they want. And “Hell hath no fury like a woman scorned.”

How does obsession with privilege and power drive people to infidelity?

Privilege and power come in so many forms. A poor man (or woman) is just as susceptible to infidelity as a rich one, and it’s often a power or attention play. That moment, that attention, that forbidden rule-breaking action…it’s a power rush. And that rush appeals to those who don’t have it, or those who demand it.

William, the main husband in EVERY LAST SECRET, is drunk on it. He expects to have privilege and power, and that makes him reckless and relatively repercussion-free. Neena is someone without power, who’s hungry for it and finds it through her sexuality.

My Twitter obsession has faded, replaced by Instagram, which is a happier and less stressful place. My feed is mostly pictures of pigs and puppies, and both bring me joy. And shoes…. I used to get a new pair of ridiculously gorgeous heels with each book release. Then I moved to an island and four-inch heels and sand don’t mix well. But I still love my shoes; I just admire them from their place on the shelf.

What about AlessandraTorreInk and your “a fearless way to” instruction in novel writing, publishing, and promotion? Tell us about the Inkers Con Authors’ Conference?

Most authors struggle with self-doubt and lack of a clear path for their writing—especially new writers. For me, I spent the first three years of my career writing at an agonizingly slow pace and doubting every move my characters (or my words) took. I’m self-taught, and struggled with the books or courses I took in writing—I needed a “writing for dummies” approach, and when I finally learned enough, I created it for myself and for others who might struggle in the same way.

Now, I have three fiction-focused courses: one in writing, one in self-publishing, and one in marketing. And two years ago, we launched Inkers Con—an author’s conference focused on fiction-writing and self-publishing. It’s held in Dallas each year, but also available online. It’s my favorite three days of the entire year, and an annual reminder of all the things I love about this industry and business.

What is your most important piece of advice for other writers?

Be patient and kind to yourself. You’ll get better with every single scene you write and will learn more with each novel. You will grow an audience, but it takes time. Don’t compare yourself to others, focus on your love of writing, and if you don’t love writing, leave it. If you love writing—embrace it, work through the tough parts, and don’t give up.

Writing is now my second job. My first is as CEO of Authors A.I., which is a technology company that is using artificial intelligence to help authors improve their novels. We’re also launching a site for book discovery and readers at BingeBooks.com. While I miss the full-time focus on writing, it’s given me a chance to work with other authors, data scientists, and the publishing industry in a way that I haven’t before. I’m continually learning new things, and so excited at the products we are creating—both on the author and the book-side of things.

In case you wanted more interesting facts… I can’t wink my left eye and I have an unsettling fondness for naps.