One Book, Triple the Problems 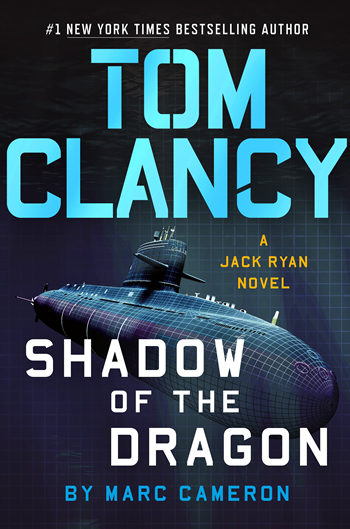 One book, one problem? Not in a Tom Clancy novel.

SHADOW OF THE DRAGON, co-authored by Marc Cameron, dumps three situations on President Ryan’s plate: a missing Chinese scientist, unexplained noises emanating from under the Arctic ice, and a possible mole in American intelligence.

When Dr. Patti Moon hears an unusual noise coming from the ocean floor, she decides to bump an investigation into it up the chain of command in the Navy. She needs to determine whether her fears are real—or if she’s just imagining the human screams. Meanwhile, operatives with the Chinese Ministry of State Security are dealing with their own mystery: the disappearance of brilliant but eccentric scientist Liu Wangshu. They’re desperate to keep his crucial knowledge of aerospace and naval technology out of their rivals’ hands. Simultaneously, President Jack Ryan is informed about a high-level mole, which prompts him to send John Clark and the Campus, his off-the-books and leak-proof option, to try and locate the missing scientist.

SHADOW OF THE DRAGON is a title that evokes memories of other Tom Clancy novels, like The Sum of All Fears, The Teeth of the Tiger, or The Bear and the Dragon. Cameron confirms that between him and his editor, Tom Colgan, they went through several title ideas until they got one with a “Clancy” feel.

“The Jack Ryan universe mirrors the real world, but it is different in some ways,” Cameron says. “Geopolitical relationships change just like in real life. Sometimes fairly quickly. Just look at the US and Japan. In both the real world and the Jack Ryan novels, China and Russia share some common goals and economic endeavors. Their militaries don’t share everything, but they do share a great deal in the way of both hardware and training.”

The many threads depicted in this novel have their roots in the author’s reading preferences and connections. He devours plenty of nonfiction about economy, foreign policy, etc., and reads a lot of scientific journals. His eldest son is fluent in Mandarin, and they’ve discussed the plight of the Uyghurs in Western China. His youngest son is a SWAT officer, and his daughter enjoys climbing mountains and is quite the adventurer.

“Many of the subplots stem from my discussions with them, coupled with nuggets of things my wife or I read,” he says. “Most years I travel, but with COVID I did many telephone interviews and a ton of reading—stacks and stacks of books and periodicals. I’m fortunate to have developed quite a few contacts over the years both through my former job in federal law enforcement and research trips with the military. For SHADOW OF THE DRAGON I interviewed submariners, experts in China and Chinese culture, and a retired US Special Forces colonel.”

The character of John Clark has transitioned from action man to a wise old man who can still kick butt, and happens to be one of Cameron’s favorite characters. In fact, the novel Without Remorse remains one of his favorites. When passing on the knowledge to the new generation, Clark trains his personnel with an adage of doing something not until they get it right, but until they don’t ever get it wrong.

“I try very hard to keep the things Clark does realistic to his approximate age,” Cameron says. “As a ‘former action guy’ and grandfather myself, Clark is a character who is near and dear to me. I grew up around cowboys and have known some mighty tough old men. Like the Toby Keith song, they were as ‘good once as they ever were.’ I see Clark that way. He can still do most things, a little more slowly perhaps. And he does things smarter. He’s been around the block enough times to know when he doesn’t need to hurry. And as my retired friends and I know, old men don’t beat around the bush. If someone attacks us, we finish things without much fuss. Posturing is for youngsters.”

The book opens with Dr. Patti Moon, an Alaska Native. It’s not a coincidence that Cameron, although a native of Texas, is now living in Alaska.

“Patti Moon was a fun character to write,” Cameron says. “I know people just like her. She’s super intelligent, spunky, and a little odd with all her government conspiracy theories, but, as President Ryan points out, she has reason to mistrust the government. I spent a lot of time in Alaska bush communities during my career with the US Marshals Service and have many friends there. I’ve been on seal hunts where my friends have shown me how to put the end of a wooden paddle to my ear and listen for the underwater songs of bearded seals—like Patti Moon talks about in the book. It was only natural to include an Indigenous person in scenes set in the far North.”

COVID has certainly affected the world in many ways. Cameron had trips scheduled to tour a couple of submarines, an offshore gas rig, and even an ice breaker. All those plans were put on ice since March. Instead he relied on his many contacts, who immensely helped his research.

It also affected other travel plans, he says. “My wife and I usually go to Rarotonga in the South Pacific for a few months each winter where I’ve been able to unplug and focus on each of the four previous Clancy/Jack Ryan novels. With borders closed we will remain in Alaska—which is fine. We love Alaska, and with social distancing the norm, I have time to write even when I stay home.”

After the release of SHADOW OF THE DRAGON, Cameron has his third book in the Arliss Cutter series, titled Bone Rattle, coming in early spring. He’s also writing the fourth entry in that series, in which the plot centers on a snowstorm.

“And we’re getting plenty of those up here this time of year,” he says. “I’ll finish it around Christmas and begin my fifth Jack Ryan novel. Then I’ll finish another Jericho Quinn. I have lots to do.”