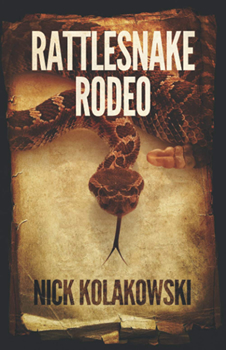 Nick Kolakowskis’ RATTLESNAKE RODEO picks up right where last year’s Boise Longpig Social Club leaves off: Jake Halligan and his ultra-lethal gunrunning sister, Frankie, have managed to escape a twisted game of Manhunt, where they were the prey. They’ve left behind a bunch of dead rich and powerful guys—now they’re broke, on the run, and hunted by every cop between Oregon and Montana. An offer of help comes from an unexpected source, but they may need to strike a devil’s bargain in order to survive.

“I’m not a gun owner,” he says, “but I have friends and family who are hardcore gun owners, and they’re big fans of answering all of your questions about firearms, no matter how outlandish. Plus, when I was writing Boise Longpig Hunting Club, I went to a range with a couple of friends and spent the day firing a lot of the weaponry used in that book.”

“When it comes to writing, accuracy in describing firearms is one of the things that I’m especially persnickety about, because fans care a great deal about stuff like that. I’ve gotten emails from folks who’ve read my books and wanted to correct some minor point about a particular pistol model, for instance.”

Any suggestions for those of us who don’t have such friends and family?

“One bit of writing advice that I recently picked up: If you’re unsure about anything super-technical in a manuscript—whether it’s an AR-15 or a car engine—you can drop the adjective ‘modified’ in front of it, which apparently gives you some wiggle room when it comes to those technical details. I haven’t tried it myself, but at least a few thriller authors swear by it. Even then, though, there are likely still boundaries to what you can get away with, in terms of describing weapons and their effects.”

The brother/sister relationship between Jake and Frankie is something we don’t see a lot in thrillers. I wondered how difficult it was balancing the humor and danger.

“That bond is central to both Boise Longpig Hunting Club and RATTLESNAKE RODEO, so I knew I had to get it right,” Kolakowski says. “Jake doesn’t like what Frankie does, and he doesn’t believe what she believes—or doesn’t believe; she’s a bit of a nihilist—but they’re siblings, and he loves her very deeply. The tension in that dichotomy is what powers the emotional spine of the book. I felt like a brother-sister relationship isn’t something you see in that many modern thrillers, and it was fun to explore that. (Especially after writing the Love & Bullets novellas, which center on a romantic couple who are sort of like a 21st century Bonnie and Clyde.)

“Jake’s love for Frankie makes her more palatable to the reader—if you’re not seeing her through that perspective, she might come off as more of a psychopath than some folks could handle, especially when she does things like execute unarmed people,” he says. “Jake is partially based off some friends of mine, including an ex-bounty hunter and a former Special Forces officer, but someone like Frankie, thankfully, isn’t in my personal circle.”

Kowalski also pulls off a bit of an unusual craft technique in RATTLESNAKE RODEO: two action-packed chapters consisting of a single sentence—one is over nine hundred words in length, the other over a thousand.

“That kind of showy, ultra-long sentence isn’t something done often in thriller fiction, though. William Goldman created a stream-of-consciousness version for a shootout at a farm in Marathon Man (the novel), but it’s hard to think of many others. (Literary fiction has more than its fair share—Faulkner’s Absalom, Absalom!, Joyce’s Ulysses, etc.—but that’s another story entirely.) I thought it’d be a fun challenge to write an entire gunfight in one epic sentence, which I hoped would it give a propulsive, breathless quality that I otherwise wouldn’t be able to achieve with conventional prose.”

Any problems with that?

“I instantly ran into problems. I originally wanted to write a 3,000-word monster encapsulating the entire fight, from the river all the way to the house, but the first draft was an exhausting run-on, and I wasn’t sure how to fix it. So I decided to break it up by inserting an ultra-short, two-word chapter between the two chapters that are made up of single, ultra-long sentences. I was writing this in the depths of winter, mind you, when I reliably lose my mind for a few weeks in there.

“I hope the audience thinks I pulled it off. Even if I didn’t, I got a real thrill out of doing something a bit unconventional that I think adds to the book’s overall tension.”

Speaking of thrills, we asked Nick to put together his dream panel for ThrillerFest; the participants need not still be living to join. Who’s in and what’s the topic?

“For one hundred percent selfish reasons,” he says, “I would choose John Dickson Carr, Agatha Christie, Frederic Dannay and Manfred B. Lee, and Arthur Conan Doyle. The topic: Planning Out and Plotting the Ideal Locked Room Mystery. I’m being selfish because the locked-room mystery is sort of my Everest—I’ve taken stabs at the subgenre for a number of years, but I’ve never been able to craft a plot that functions without becoming too unwieldy and weird. At this hypothetical panel, I would come with questions—a lot of questions—about how they could do it so well.”

Kolakowski having taken stabs at anything surprised us. Based on RATTLESNAKE RODEO, we figured he’d just shoot the hell out of it.

Nick Kolakowski is the author of the Love & Bullets Hookup series of crime novellas. His short fiction has appeared in Thuglit, Shotgun Honey, Plots with Guns, and various anthologies. His fiction and non-fiction have appeared in The Washington Post, McSweeney’s, NPR’s website, The North American Review, Shotgun Honey, Thuglit, Spinetingler, and other magazines and anthologies. He is the author of the noir novels A Brutal Bunch of Heartbroken Saps (Down & Out Books, 2017) and Boise Longpig Hunting Club (Down & Out Books, 2018) as well as the satirical nonfiction book How to Become an Intellectual (2012, Adams Media, a Simon & Schuster imprint). He lives and writes in New York City.