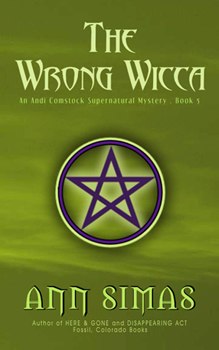 Andi Comstock has grown accustomed to talking to the cremated dead, so it comes as a surprise when a woman named Cassie asks Andi to help find her murdered body. All the dead woman knows is that it’s in a forest.

Andi has no idea what awaits her once Cassie’s body is found. First, there’s Cassie’s golden retriever, Trigger. Then, there’s the magic trunk. The dog she can deal with, but what’s inside the magic trunk is another story.

Andi and her new husband, Detective Jack Harmon, planned to take the week off to paint the exterior of their house. Instead, their life together is turned upside down the moment the magic trunk opens itself.

Are its magical contents really significant? Will they lead Andi to Cassie’s killer? And what in the name of all that’s holy is the Earth box about?

Author Ann Simas spent some time with The Big Thrill discussing the fifth installment of her mystery series, THE WRONG WICCA:

How did you get the idea for the Andi Comstock Supernatural Mysteries?

I worked in a building where I constantly smelled smoke, but no one else did. Since I have a vivid imagination, I knew I could use that in a book, and one day it came to me how. My protagonist would smell smoke in the building where she worked and immediately afterward, she’d hear a voice, and sometimes, the voice would ask for help. Who were these “voices”? The deceased who had just been cremated. Where was the crematorium? On the opposite corner of the block. For me, it was the perfect storm.

The ritual for exorcism is much longer than what I expected. I also didn’t know that the Order of St. Michael the Archangel, Order of Exorcists doesn’t report to the Vatican.

Almost everything about THE WRONG WICCA surprised me. I’m not sure if that’s because of the current world situation or if my mind simply wandered down a new path once I started doing my research. Certainly, it didn’t end up being what I thought it would when I started writing. Yes, I deviated, but the end result turned out to be extremely satisfying.

THE WRONG WICCA is a supernatural fantasy thriller. I’d really like readers to say, “Wow! What a ride that was!” when they put the book down. And then, I’d like them to pick it up and read it again.

Ann Simas lives in Oregon, but she is a Colorado girl at heart, having grown up in the Rocky Mountains. The author of 32 books, she particularly likes to write mystery-thriller-suspense with a love story and often paranormal or supernatural elements.

An award-winning watercolorist and a budding photographer, Ann enjoys needlework and gardening in her spare time. She is her family’s “genealogist” and has been blessed with the opportunity to conduct first-hand research in Italy for both her writing and her family tree. The genealogy research from decade’s old documents in Italian, she says, has been a supreme but gratifying challenge.