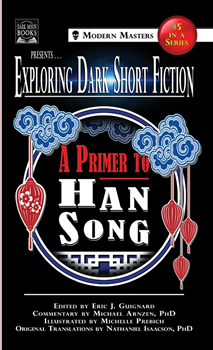 Considered one of the three most important voices in contemporary Chinese science fiction (along with Liu Cixin and Wang Jinkang), Han Song is a multiple recipient of the Chinese Galaxy Award (China’s highest profile sci-fi prize), as well as the Chinese Nebula Award and Asian-Pacific Sci-fi Gravity Award. Song bridges new developments in science and subjects of cultural and social dynamics with stories of dystopia, governmental conspiracy, and subversive horror, earning praise for his work as “absurdly dark,” while also reigniting a science fiction renaissance.

Author Eric J. Guignard took some time out of his busy schedule to talk with The Big Thrill about his latest anthology, EXPLORING DARK FICTION #5: A PRIMER TO HAN SONG:

My earliest media influences were The Twilight Zone, Jack London, Stephen King, and vigilante-style comic books, and because of that I tend to write with the same sort of blended literary and thriller audience in mind.

Why is Han Song significant?

Because author Han Song is a modern master of the literary and quiet short horror tale, incorporating a striking range of emotion, surrealism, and character study into his cross-genre work.

The excitement, the thrills. The strange. The emotional resonance. The imaginative. Basically, I love monsters and explorations of fear, but I also love literary accouterments and beautiful storylines, which is an ideal (to me) in this genre.

ERIC J. GUIGNARD is a writer and editor of dark and speculative fiction, operating from the shadowy outskirts of Los Angeles, where he also runs the small press, Dark Moon Books. He’s twice won the Bram Stoker Award, been a finalist for the International Thriller Writers Award, and is a multi-nominee of the Pushcart Prize.

He has over one hundred stories and non-fiction author credits appearing in publications around the world. As editor, Eric’s published multiple fiction anthologies, including his most recent, Pop the Clutch: Thrilling Tales of Rockabilly, Monsters, and Hot Rod Horror, and A World of Horror, a showcase of international horror short fiction.

His latest books are his novel Doorways to the Deadeye and short story collection That Which Grows Wild: 16 Tales of Dark Fiction (Cemetery Dance).