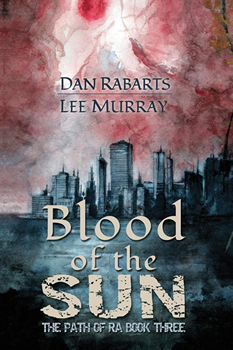 Dan Rabarts and Lee Murray’s latest thriller, BLOOD OF THE SUN—third in the Path of Ra series—reveals tantalizing secrets and resolves enigmas evoked in the first two books.

In BLOOD OF THE SUN, the eternal struggle between light and dark erupts across Auckland’s volcanic skyline, sparked by a gang massacre on Auckland’s Freyberg Wharf. Body parts are scattered all over the place. Since the police laboratory is out of action, it is up to independent scientific consultant Penny Yee to deploy her expertise and talent to single-handedly clear the mess. The hellish task is made worse by the earthquake swarms and the insufferable heat. Something’s gotten into her kid brother Matiu, an ex-con who drives her around. To top it all, there’s Cerberus’s infernal barking …

Matiu, a matakite, or seer in Maori, can taste the chaos in the air. The streets are shuddering in protest. Supernatural forces, tentacled things, are pushing up against the protective veil-like floodwaters. But there’s a bright side: he’s got this coveted, energy-saving, flash new car. Penny’s been too busy working to bug him, and Erica keeps scheduling their probation meetings over her lunch hour…

Join Penny and Matiu Yee for a magisterial family reunion on the eve of an epic battle between light and dark.

The authors’ successful co-editing of two anthologies led to their collaboration, “possibly the sole Maori-Asian Kiwi writing partnership in existence.”

“Dan and I live in the same headspace: we love these characters and we’re invested in their stories, so we’ve found a way to make it work,” Murray says. “Of course, technology helps.” 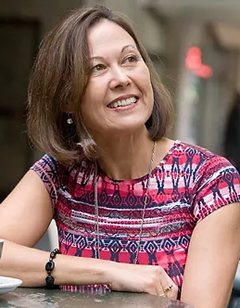 What will stay with readers of BLOOD OF THE SUN is what Rabarts calls “a sense of place, the brittle corrugated iron edges of New Zealand’s urban landscape and the sense that lurking just beneath that place is something darker.” Murray adds a “sense of place fundamental to stories from Aotearoa-New Zealand, where the supernatural simmers.”

They flourish within their subgenre due to its “wide range of options… to expose and explore the things that terrify.”

William Faulkner said, “If a story is in you, it has to come out.” That coming-out process traverses several paths, not the least of which is self-discovery, as with Rabarts and Murray.

Rabarts says he became “a gin drinker” while writing BLOOD OF THE SUN, and that his “own knowledge and understanding of … Maori myths and legends grew.” Murray had that “eureka moment that writers sometimes have … but what really gave me a frisson was learning that Mataaho, the god who dwelled in Mount Eden’s hollowed volcanic cone overlooking the Auckland Isthmus, was the guardian of secrets hidden in the earth.”

No writing thrives in isolation, and the authors are happy to cite their influences. Rabarts acknowledges New Zealand fantasy/science fiction author Hugh Cook as his “most significant formative influence.” Murray considers “Maggie Stiefvater’s The Scorpio Races a gorgeous example of magical realism in narrative.”

Rabarts says he loves it “when people ask about the influence that New Zealand, our landscape and culture, our sense of identity as New Zealanders has on our work, and how that impacts the drama of the work we create. … There is an intrinsic link between the place we call home and this series of books… of myths and legends carved into our souls.” 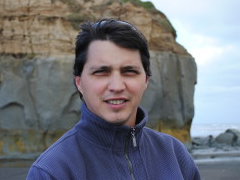 Murray adds that “Dan and I love it when people ask if there will be any more stories involving Matiu and Penny, which is a lovely endorsement of the books’ impact on readers…Dan and I are talking about adapting the series for screen …”

In response to the search words “challenges of co-authoring,” Google spat out 4,720,000 results in 0.69 seconds. I feel enlightened enough with Rabarts and Murray’s confessions.

Murray: “Those digressions have paid off creatively, resulting in some great plot events. Dan’s prose is full of deliciously tenebrous flair … So even though I had an inkling of where the story might take us, it was always a surprise to open a chapter and find that Dan had thrust Penny and Matiu into some other hell-raising tangent … I just had to see where it might end.”

While the remarkable duo’s convergent creativity enthralls their readers, each retains distinct talents and preferences. Rabarts is also a podcast narrator, and Murray is an editor. Although Rabarts enjoys the downhill view from his little house, he works everywhere and anywhere. Murray likes writing in her office and taking occasional peeps at a cow paddock.

It seems Ra, the Maori sun god, smiles on the pair as they shine a light into the darkness.

Dan Rabarts is the multi-award-winning writer of fantasy novels and speculative fiction, sometime narrator of podcasts (including stories for the Hugo award-winning StarShipSofa), occasional sailor of sailing things, and father of two wee miracles in a little house on a hill under the southern sun.

Lee Murray is a multi-award-winning writer and editor of science fiction, fantasy, and horror (Sir Julius Vogel, Australian Shadows) and three-time Bram Stoker Award® nominee from Aotearoa New Zealand. She lives in the sunny Bay of Plenty, where she conjures stories from her office overlooking a cow paddock.