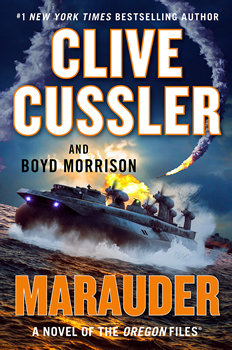 In the latest Clive Cussler Oregon Files® novel, MAURAUDER, Juan Cabrillo and the Corporation must stop a terrorist plot to release a deadly chemical weapon across the globe. To do so, they will have to decipher an ancient mystery and thwart the cunning modern enemy who has more than just deadly weapons at their disposal—and there isn’t much time.

In MARAUDER, co-author Boyd Morrison carries the torch one last time for Clive Cussler, who passed away earlier this year. And Morrison says this novel’s origin—his last as co-author—came from several ideas that conflated into another action-adventure plot.

“I’m always trying to dream up things I’ve never done before, and one idea I had was to create a villain who was already dead,” Morrison says. “That produced a great challenge for me: Why would he plan all this mayhem from beyond the grave, and how would he accomplish it? That led to my idea for the chemical weapon that is at the center of the story. And then I had to come up with an origin for this weapon that was tied to the past, which spurred me to come up with the lost Roman legion dealing with their own devastating situation. The story snowballed from there.”

The deceased protagonist goes—or went—by the name of Lu Yang, a fanatical Chinese nationalist who dreams up a twisted legacy for himself, and for which he enrolls his own stepdaughter and her husband—April Jin and Angus Polk. The couple had lost everything, and now Yang provides them a chance to inherit millions, but only if they complete the deadly missions.

To fans of the original MacGyver TV series, the name Angus may ring a bell—at least the ones who watched the last episode.

“The show is one of the greatest adventure series ever made,” the author says. “It wasn’t intended to be a reference to MacGyver, but I like the connection. Maybe it was in the back of my mind. However, Angus Polk is his opposite in every way.”

This time around, the series welcomes two guests that become instrumental to the case at hand, and at least for the duration of the novel, they join the team aboard the Oregon.

“Sylvia Chang was a fun character to write because of her link to the Oregon crew, which I won’t reveal here,” Morrison says. “She’s a brilliant scientist who specializes in plasma physics, so she is instrumental in helping Juan Cabrillo in his fight against the villains. Bob Parsons is a tough retired Marine and hovercraft pilot, and the cover of the book might give a clue as to his involvement.”

Research is an integral part of writing, one that Morrison enjoys because he discovers interesting facts throughout the process—in particular, new technology developments.

“There is technology in the book that may seem like science fiction, but all of it has a basis in scientific research,” he says. “For example, the title of the book comes from an actual experimental project begun at Lawrence Livermore National Laboratory in 1991 that was eventually code-named MARAUDER (Magnetically Accelerated Ring to Achieve Ultrahigh Directed Energy and Radiation). Air Force scientists successfully tested a plasma cannon, which shoots doughnut-shaped projectiles of superheated plasma at hypersonic speeds, and shortly afterward the work was classified secret by the US government. I was shocked to find that a weapon we’ve seen in so many sci-fi movies was developed and tested more than 25 years ago. No information about MARAUDER has been published since 1995, but it’s quite possible that the research continues to this day. Futuristic weapons like rail guns and anti-missile lasers were just as fantastical not so long ago, but both are set to become operational on US Navy ships in the next few years, if they aren’t already.”

As mentioned before, the present-day shenanigans interlace with an ancient mystery. Cussler’s books always do; it’s a tried-and-true formula that resonates in the hearts of readers.

“At the Battle of Carrhae in Syria, an entire Roman legion of 10,000 soldiers was taken captive by the Parthian Empire—in present-day Iran. There is no definitive answer about what happened to that lost legion,” Morrison says. “Of course, an unsolved mystery like this got my mind churning, and I developed an alternative theory.”

That theory became a major turning point in the plot of MARAUDER.

Readers of the previous novel, Final Option, would be aware of the need to launch a new and improved Oregon in this book—a process that has been done before. Cabrillo’s debut appearance in Flood Tide tells us that it was the third iteration of the ship.

“Clive and I had a blast figuring out what it would look like and what new features it would have,” Morrison says. “When we had the basics down, I drew up a sketch of what I imagined the ship to look like, including all of its cool new gadgets, and sent it to Clive. His response was, sadly, the last email I received from him before he passed away. It simply read, ‘A masterpiece. Go with it and make MARAUDER a winner.’ I think he would be thrilled with how the book turned out.”

Cussler did approve the outline and provide notes for a portion of the novel. Unfortunately, it fell on Morrison to complete the rest without the feedback he’d grown accustomed to in previous novels.

“I’d gotten quite used to what kind of feedback he would give, as I had written five books with Clive before,” Morrison says. “I tried to keep that in mind as I finished the novel. It was quite emotional for me when I was writing the epilogue, knowing that it was the first book I’d be completing without him.”

MARAUDER will be Morrison’s last contribution to the Oregon Files® series. In that respect, the book became a swan song of sorts. The decision, however, was made years prior.

“Before we started Final Option, I told Clive that it and the book that became MARAUDER would be my last two novels in the series,” Morrison says. “I felt it was time for me to go back to writing my own stories and give someone else a crack at creating new adventures for Juan and his crew. Clive was disappointed to lose me, but he was very gracious and understood why I wanted to move on.

“Many of my readers have asked whether I will continue my Tyler Locke series,” Morrison says. “My answer is that I’d love to someday if I can get the right combination of a fun idea and an interested publisher. In the meantime, I’m in the finishing stages of writing an historical thriller. Although the story takes place in the Middle Ages, it has the same kind of fast-paced plotting and exciting action that readers have enjoyed in my contemporary adventures.”

Until then, MARAUDER will give Cussler fans one more adventure to enjoy.