Between The Lines, Features, Latest Books
October 31, 2020
by Robert Rotstein
0

Love, Hate, and the Devastating Power of Nature 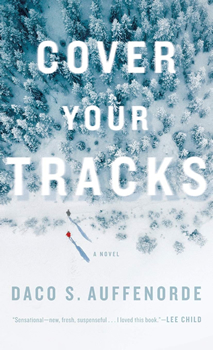 As part of the International Thriller Writers’ debut class of 2013, I met many wonderful writers, including award-winning author Daco S. Auffenorde—who three years later, I’m delighted to report, became my wife. So I’m especially grateful and excited that The Big Thrill has asked me to speak with Auffenorde about her compelling new psychological thriller, COVER YOUR TRACKS.

Iconic, bestselling author Lee Child says of the novel, “Sensational—new, fresh, suspenseful…I loved this book”; Publishers Weekly praises the well-crafted scenes that keep up the energy and tension; and bestselling writer Glenn Meade describes the book as “[f]ast, slick, brimming with tension—Auffenorde knows how to ramp up the suspense with this terrific new thriller. Loved it!”

Reminiscent of Jack London’s classic short story “To Build a Fire” and James Dickey’s Deliverance, COVER YOUR TRACKS tells the story of Margo Fletcher, who is eight months pregnant and traveling by train from Chicago to Spokane, her childhood home. While passing through an isolated portion of the Rockies in blizzard conditions, the train unexpectedly brakes. Up ahead, deadly snow from a massive avalanche plummets down the mountain.

Despite the conductor’s order to stay seated, former Army Ranger Nick Eliot insists that survival depends on moving to the back of the train. Only Margo believes him. They take refuge in the last train car, a private passenger car, which Nick heroically uncouples in time to avoid the avalanche. The rest of the train is hurled down the mountainside and lost forever.

Margo and Nick, the sole survivors, are stranded in the snowstorm without food, water, or heat. Rescuers might not arrive for days. When the weather turns violent again, the pair must flee the passenger car and run for their lives into the wilderness, where they face the deadly cold and predatory wild animals. As the story unfolds, we learn that both Margo and Nick have secrets that have brought them together and threaten to destroy them.

“The novel explores love and hate, the devastating power of nature, and the will to survive,” Auffenorde says. “Two seemingly different people find themselves facing unimaginable danger and learn that maybe they’re not so different after all.”

Auffenorde gets inspiration for her novels in several ways—sometimes even through dreams or flashes that convey an entire story—but the idea for COVER YOUR TRACKS began with her love of nature and her childhood fascination with trains (her college-professor father had worked for the railroad in his younger days). Then she saw the movie version of The Fugitive, which began with a catastrophic train wreck, and the idea of surviving both a train wreck and a snowy wilderness began to brew.

While researching story details, Auffenorde came across old newspaper columns detailing the deadly 1910 Stevens Pass avalanche in Washington State in which a train and its passengers stuck in snowdrifts on railway tracks were swept 150 feet down into a mountain gorge. The accident is still registered as the deadliest avalanche in US history.

Though COVER YOUR TRACKS is, as Publishers Weekly observes, a “nail-biter,” the novel also confronts important social issues—parenting, family dynamics, and even the horrors of war. Auffenorde seamlessly and with sensitivity addresses these issues while keeping the pages turning. “When you focus on characters, get inside their beings, both plot and meaning take shape,” she says. “In my novel, there are three main characters—Margo, Nick, and the forces of nature—and they all have something to say.” Auffenorde went to great lengths to ensure the narrative’s accuracy. “I learned a lot about how trains and railroad cars work and how people have actually survived avalanches and days in frigid, treacherous conditions. The strength of the human spirit is remarkable—and is a major theme in COVER YOUR TRACKS.”

When not writing, Auffenorde paints, mostly in watercolors. She sees a relationship between the visual and the literary arts. “I enjoy painting characters in unusual and unexpected settings. Soon after I finished COVER YOUR TRACKS, I began a series of paintings featuring a jester. Not only is the harlequin outfit visually appealing, but historically the term ‘jester’ derives from the French word for storyteller. The jester is also a dramatic device used as a scene changer—a person who tells stories to distract. In COVER YOUR TRACKS, Margo Fletcher finds herself in disturbing settings after a lifetime in which people have told her stories that distract from reality.”

Auffenorde can sit at a computer for hours—at least until her constant companion, a Balinese cat named Kiki, decides that she’s sat too long and tries to take her chair. (Kiki, improbably, has puppy-dog eyes and loves to play fetch like a canine retriever!) “A book’s story evolves during the editing process,” Auffenorde says. “That necessarily involves several draft run-throughs and can even be as intense as an entire structural rewrite. When I feel a story is as good as it gets on paper, I listen to it using a text-to-speech app to decide if it’s really ready. If you can listen to your story and it sounds like someone else’s work, you know you’re on the right track.”

Auffenorde and I act as beta readers for our books—each playing renowned editor Max Perkins for the other. “That process goes smoothly,” she says, then adds, “most of the time!”

For fledgling writers, Auffenorde stresses the importance of having beta readers and even a private editor. “Most publishers expect to receive a polished product. And it’s always important to get different perspectives on a manuscript. Don’t fear criticism. I’ve worked as a practicing attorney, and critique is a plus for a writer. Attorneys learn to look at all sides of an issue and to change approach if necessary. Writers should do the same.”

Auffenorde couldn’t participate in an interview for The Big Thrill without emphasizing how much ITW has meant to her. “I’ll always cherish the friends that I’ve made from our debut class, as well as the guidance and support from so many of our community’s wonderful writers. And of course, I met my ‘Max Perkins’ through ITW.”

Auffenorde is currently working on her next novel, a thriller about a woman who survives a fall from the fourth story of a building, only to wake with severe psychogenic amnesia. The woman has no memory of how she fell or who she is. The cold truth is someone wants her dead, and there’s no place safe for her.

COVER YOUR TRACKS is a riveting psychological thriller with the depth of literary fiction. Luminaries who’ve praised the novel include Lee Child, K. J. Howe, Glenn Meade, D. P. Lyle, and James Ziskin. And, as Auffenorde’s very own Max Perkins, I can attest to the fact that it’s terrific.