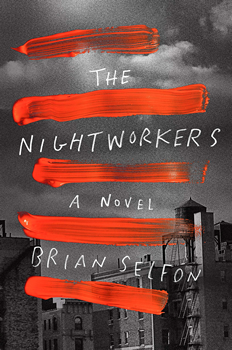 Shecky Keenan has a family. They’re all criminals.

In Brian Selfon’s THE NIGHTWORKERS, Shecky runs a money-laundering operation in Brooklyn, with many complex moving parts.

His artist nephew Henry, 21, is the chief bagman, enforcer, and training officer: “Darkness is your friend,” he tells a new recruit. “I run the mules in my family, and this is my promise to you. I will keep you in the dark.”

Kerasha, 23, fresh out of jail, is Shecky’s poetry-loving niece, a born thief with “a sixth sense for blueprints and layouts, a feel for floors and walls, corridors and closets.”

Together, Shecky notes with satisfaction, they make “a perfectly wonderful, perfectly Brooklyn family of misfits.”

Until things start going wrong. A strange car is following them, some of the bank accounts they use have gotten glitchy, and a new runner has vanished, with a quarter million dollars of a very bad man’s money. Add in a psychotic girlfriend and a police officer with a very personal reason to want to burn them all down, and suddenly bodies are dropping, and the three of them are scrambling not just to stay one step ahead, but simply to stay alive.

Who can they trust? Can they even trust each other? When secrets are what you have, when is it one secret too many? What does the future hold for a family on the run when crime is what keeps it together?

THE NIGHTWORKERS pursues all those questions in an electrifying, surprising thriller filled with big ideas and an even bigger heart, and its world is one the author knows well. Now an investigator for the King County, Washington, Department of Public Defense, he spent more than 15 years as an investigative analyst for New York law enforcement, most recently as the chief investigative analyst for the Brooklyn District Attorney’s office.

The book isn’t based on any specific cases, he says. “All the events and characters in THE NIGHTWORKERS are made up. For many years, though, I was in a position to listen in on lives rather different from my own—at least on the surface. Over time, I came to understand that each of the so-called criminals I was listening to was more than what they were being investigated for.

“The first scene I thought up came out of a civil rights investigation. I was working at a large state agency with a growing investigations bureau. Complaints had come in that property managers were making different requirements—the amount of the down payment, for example—depending on whether the prospective renter was White or Black. The civil rights bureau sent an office-wide email asking for volunteers to do some light undercover work. I jumped on it.

“I chose a fake name and was given a fake job, a fake salary, and a recording device. Another volunteer was given a similar fake job with an identical fake salary. The only difference between us, as far as a property manager could see, was race.

“And so I found myself shaking hands with property managers, touring apartments the real me never could afford, and wondering—what if I get made? Should I run—from a property manager? And what if I open this closet door (I was going from room to room, pretending to size the place up, and daydreaming in my usual way), and a body falls out? And what if this body that falls out is someone I recognize?

“The civil rights investigation ended with censures, settlements, and bad press for some property managers. For me it led to a novel I wrote and threw away, and that novel led to THE NIGHTWORKERS.”

It’s a very gritty crime novel, but with some unusual elements—the embracing theme of family, for one; the strong elements of art, poetry, and, in Shecky’s case, theater, for another. How did these come about?

“I couldn’t not write about a family. The characters at the heart of THE NIGHTWORKERS came to life during a chaotic period of great personal growth for me. The birth of my son had me looking forward and backward.

“I felt bad about what I was doing to the family I was imagining, but putting them in crisis helped me manage my own. The least I could do for them was share some of my coping tools. Art, poetry, and theater can get us through a lot.”

He cites some of his own influences: “Walt Whitman is prominent in the book, and his example encouraged me to write loud and embrace contradictions. Kate Atkinson gave me permission to let a character have a conveniently good memory for poetry. John le Carré’s A Perfect Spy showed me how to switch from third person to first within a paragraph. Toni Morrison’s Jazz was my model for inflecting my voice without losing it. Martha Grimes inspired a small plot point, though I ended up removing it. Movies by the Coen brothers, Martin Scorsese, and Quentin Tarantino, taken in at an impressionable age, probably added to the blood and profanity.”

Other people were influential, too. Before he ever got into investigative work, Selfon spent a brief time in book publishing, in the editorial department of the Simon & Schuster imprint Free Press, with an editor named Rachel Klayman.

“Rachel is hilarious and scary-smart, and she showed me what a Real Editor can bring to a book. My experience as Rachel’s assistant helped me take notes from Daphne Durham, my genius editor at MCD x FSG. Daphne saved me from quitting novels and was a true creative partner on THE NIGHTWORKERS. When she said rewrite the main character, I said no problem.

“By far the most important thing to come from my short career in publishing, though, is that it introduced me to my wife. She was another editorial assistant at Simon & Schuster, and delivering manuscripts to her desk was the best part of any job I’ve ever had.

“She then introduced me to an important friend of hers, the writer and editor Anne Stameshkin. A quick decade later, Anne introduced me to her friend and agent, Jenni Ferrari-Adler at Union Literary.

“Jenni agreed to look at the book. Her response to my submission was so fast, and I was so prepared for failure, that I read her message as a rejection. We worked through that.

“Jenni helped me cut back on the crazy and through some weird magic got the book to Daphne, even though we never submitted it to her. Daphne made a quick offer and quite likely has never forgiven herself.”

Selfon is done now with the central family in THE NIGHTWORKERS—but not with its world: “THE NIGHTWORKERS came about as a kind of community art project, and in retrospect I see it as a demented love letter to Brooklyn. My name is on the cover, but whatever works in the book came from my collaboration with the city I wrote it in.”

Not only that, but his next novel features several supporting characters from the book, in new and expanded roles. He won’t say how they relate, “but here’s the story: Two college-age sisters launch a rogue investigation after their father is arrested for a crime he never could have committed. The sisters cross legal and moral lines to support themselves and beat their father’s case. While one sister pursues justice in the courts, the other looks for vengeance on the streets.”

I’ve already got my wallet out. Brooklyn has produced a great many notable literary voices—it may just have added another one.