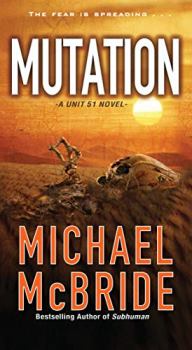 IT LIVES.
In a research hangar in Virginia, a Unit 51 team studies an ancient but long-dormant virus that can transform human physiology—and turn it into something else…

IT SPREADS.
In Mexico and Turkey, the men and women of Unit 51 race to uncover a global link between the mutations: a connection as ancient as the oldest tombs on earth—and as alien and unknowable as the universe itself. But time is running out. The infected are growing in number. And the nightmare is going viral.

I hope that people will contemplate the mysteries of the hidden world around them and appreciate the strangeness lurking beneath everyday experiences. I want my readers to close the book, open their imaginations, and think “What if…?”

Sci-fi/horror is a unique amalgam of all things scary, which allows me to explore everything from biology and technology to cryptids and the supernatural. I love trying to find ways to explain the inexplicable and rationalize the irrational, to give life to the impossible in a manner that allows the reader to believe in the possibilities.

Why do you write sci-fi/horror as Michael McBride and mainstream thrillers as Michael Laurence?

I signed contracts with both Kensington and St. Martin’s at the same time, so it made sense to give both publishers the freedom to release their respective books on their own schedules without having to worry about stepping on one another’s toes. Plus, the books vary so widely in subject matter that readers of one style might not necessarily carry over to the other. I thoroughly enjoy writing as both authors, so it’s a dream come true for me.

Michael McBride was born in Colorado and still resides in the shadow of the Rocky Mountains. A national bestselling author and two-time winner of the DarkFuse Readers’ Choice Award, he writes fiction that runs the gamut from horror/science fiction (Subhuman and Subterrestrial) to thriller (The Extinction Agenda and The Annihilation Protocol, as Michael Laurence).