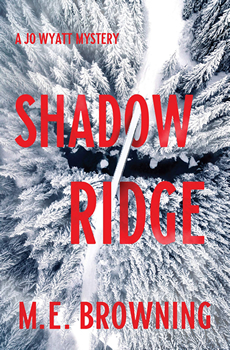 Echo Valley, Colorado, is a place where the natural beauty of a stunning river valley meets a budding hipster urbanity. But when an internet stalker is revealed to be a cold-blooded killer in real life, the peaceful community is rocked to its core.

It should have been an open-and-shut case: the suicide of Tye Horton, the designer of a cutting-edge video game. But Detective Jo Wyatt is immediately suspicious of Quinn Kirkwood, who reported the death. When Quinn reveals an internet stalker is terrorizing her, Jo is skeptical. Doubts aside, she delves into the claim and uncovers a link that ties Quinn to a small group of beta-testers who had worked with Horton. When a second member of the group dies in a car accident, Jo’s investigation leads her to the father of a young man who had killed himself a year earlier. But there’s more to this case than a suicide, and as Jo unearths the layers, a more sinister pattern begins to emerge—one driven by desperation, shame, and a single-minded drive for revenge.

As Jo closes in, she edges ever closer to the shattering truth—and a deadly showdown that will put her to the ultimate test.

Part of the joy of reading a novel is the discovery of what lies hidden between the lines, and each reader interprets those clues in light of their own experiences. In the editing process, I discovered aspects of the story I didn’t consciously weave in, and what I intended may not be what a reader takes away from the story. If readers recognize that SHADOW RIDGE explores the complexities of family, great. Likewise, humility, loyalty, and our reaction to duty are threaded through the narrative. But ultimately, when the last page is turned, I hope readers think Jo is exactly the cop they’d want to respond if they ever needed to call for help.

I’ve always been intrigued by mysteries. It’s one of the reasons I became a cop. Every case I ever investigated was a puzzle to solve. Working the beat afforded me a peek into other people’s lives and their motivations. As an author, I draw upon my experience and use many of the same skills—only now it’s a fictional sleuth who unearths clues and unravels secrets. Plus, who doesn’t occasionally want to plot the perfect crime and get away with murder?

This was the book I was scared to write.

I dissect the books I admire most. The act is an autopsy of sorts, although instead of trying to learn what killed each story, I’m seeking to learn what authorial tricks made the story compelling. Let me begin with Alafair Burke. Only after reading The Wife did I realize how to fix a POV problem I’d been having. Bent Road by Lori Roy taught me that riveting stories can unfold in a deceptively leisurely manner. Gregg Hurwitz offers counterpoint with his breakneck pacing. A Prayer for Owen Meany by John Irving illustrates how an innocuous event woven throughout the story can prove absolutely vital to its conclusion. Jane Harper for her settings, and Jordan Harper for his voice. Laura Lippman for loads of reasons. Mandy Mikulencak for personal encouragement and her ability to turn a phrase, and finally Daniel Woodrell—for his unparalleled ability to portray the grimmest events with lyrical restraint.

M. E. Browning served 22 years in law enforcement and retired as a captain before turning to a life of crime fiction. Writing as Micki Browning, she penned the Agatha-nominated and award-winning Mer Cavallo mysteries, and her short stories and nonfiction have appeared in anthologies, magazines, and textbooks. As M.E. Browning, she recently began a new series of Jo Wyatt mysteries with SHADOW RIDGE. Under both names, she is unapologetically sarcastic.