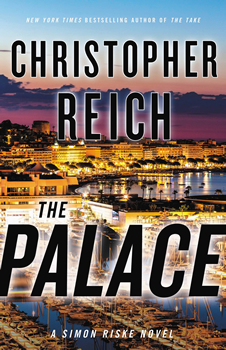 At a time when many of us are suffering from cabin fever, Christopher Reich’s new novel, THE PALACE, feels like the perfect antidote: a high-flying, globe-trotting thriller that takes readers from Cannes to Singapore, with stops in London, Tel Aviv, and Zurich along the way.

Returning hero, ex-con Simon Riske, is back on the case for his third outing. Riske is known among Europe’s elite as a restorer of antique cars—“a glorified mechanic,” as one character puts it—but of course that’s just a cover for his true profession. In truth, Riske is also “a man who gets things done,” a private spy.

In the novel’s opening scene, Riske and his young apprentice, Lucy Brown, are in a rich man’s hotel room trying to reclaim a stolen Monet painting. Of course, everything does not proceed according to plan. The pulse-pounding sequence quickly sets the stage for what follows and establishes the tone of the book: smart, suspenseful, at times funny, and always full of clever twists.

Although it reads easily, Reich acknowledges that the opening was the product of lots of hard work. “I wrote it in one sitting, then went back to it time and again,” he says. “The first chapter in a thriller can make or break a book.”

After his mission to reclaim the painting goes awry, Riske finds himself considering an early retirement when an old friend reaches out for help. Rafael de Bourbon is a Spaniard who’s recently opened a hotel in Thailand with his beautiful new wife, Delphine—only now he’s been arrested on charges of corporate theft and extortion.

Ten years earlier, de Bourbon and Riske had been like brothers—both of them young private bankers with dark secrets in their past—and de Bourbon had done him a crucial favor. Now de Bourbon is being threatened to confess to crimes he didn’t commit. As one character observes, Thailand is the kind of place where “short of murder, everything’s negotiable. Maybe that too.”  If anyone is going to negotiate de Bourbon’s release, it’s going to have to be Riske.

“At its heart, THE PALACE is a story about friendship and what we do to honor the past,” Reich says. “‘A friend in need is a friend indeed.’ I guess it’s about honoring a debt, too. Some acts cannot be forgotten.”

One of the things that makes THE PALACE so compelling is the way Reich balances the large-scale global intrigue with the more personal stakes, including Riske’s unresolved feelings toward his old friend’s wife, an ex-lover. “All top-notch thrillers have a personal quest at their heart,” Reich says. “The hard part is finding a larger, contemporary geopolitical issue to anchor a story with.”

As Riske tries to help de Bourbon get free of his predicament, he must navigate the seamy underworld of Thailand, from the back streets of Bangkok to one of the nation’s most notorious prisons. At every step of his journey, there’s a strong sense of place and texture. Riske is described in the novel as a “foreigner never more at home than when lost on foreign streets and surrounded by foreign people,” and it’s easy to imagine Reich himself is much the same. Especially when researching a new novel.

“Research is an ongoing process,” he says. “It never really ends until the book is finished. I wrote most of THE PALACE while living in Thailand for four months in 2019. I was ‘on site’ so to speak. Great country. Wonderful people. A large part of the plot was derived from everyday things I saw and experienced while there. One of the benefits of being able to travel once your children are in college.”

Of course, as much as Reich loves being an international tourist, writing means spending more time at his desk than on the streets of exotic cities. His advice to aspiring writers is simple: “Put in the hours. Set goals. Stay focused. Mark Twain said it best: ‘Apply back of pants to seat of chair.’”

Novel after novel, Reich follows the same basic routine: “Up at six. Writing by seven. Done by three. Five or six days a week for nine months. I only send my editor and my agent the book when it’s close to being finished. I’m revising the entire time.”

As for how he manages to keep up that pace year after year, he has a secret weapon: the occasional midday nap.

Over the years, Reich has written both series and standalones, and each can be tough in its own way. “Every book—series or not—is a challenge, but an enjoyable one,” he says. “I hope the love I have for creating these stories, for ‘spinning these yarns,’ comes through on the page. I count myself a lucky man to be able to earn my living doing what I do.”

As for what’s next, Reich is currently in the middle of a new Riske novel, Once A Thief, and finishing a book for Audible.com, Everything She Always Wanted, to be read by Candice Bergen.

Reich also teases that there’s “big news on the TV front about to spill.”

Perhaps a Simon Riske television series? If so, we’ll all have another reason to stay home and play armchair tourist, watching as Riske’s international adventures come to life on the small screen.