Every Life Has a Price 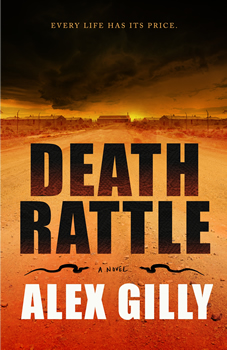 Alex Gilly could have given up writing after the success of his debut thriller Devil’s Harbor. Not because the book did exceptionally well in the marketplace—though it did—or because Gilly’s dream of becoming an author had finally materialized—though it had.

No, both of those factors should have been motivators, but instead, Gilly admits that after his 2015 release, he succumbed to “second-album syndrome,” a common ailment that plagues many new writers—the pressure of writing that all important “Book Two.”

“The success of Devil’s Harbor gave me a false sense of confidence,” he says. “Devil’s Harbor was told from a single point of view, and I set out to write book two from two points of view, thinking it couldn’t be that hard.”

He was wrong—and the challenge of trying to connect those voices, regardless of how well each character was developed, tangled up the story so much, Gilly struggled to right it.

“I ended up missing deadlines, which left me quite depressed, and all my confidence evaporated,” he says. “I got past it by not stopping. I kept writing until I had a draft. Once I got to that stage, I started re-writing, and things got easier.”

The result of that persistence is DEATH RATTLE, a pulse-pounding thriller set on the US-Mexico border. The story features two characters from Gilly’s debut—human rights lawyer Mona Jimenez and her husband, border patrol agent Nick Finn. While the two are a team in their marriage, their work life often puts them at odds—and so when Nick rescues Carmen, a fleeing refugee from Mexico, and she’s thrown in jail, he calls on his wife to review the case.

As it turns out, Carmen was dating an enforcer for a drug cartel. Last time she tried to run from him, he burned her with acid. If he finds her this time? Carmen is sure he will kill her—which is why she’s desperate to stay in the US.

She dies before that asylum can be granted, but her case reveals a much bigger problem with the prison—the company that runs it is on the verge of signing a billion-dollar procurement contract with Homeland Security. And there are a lot of people in the world for whom a billion dollars is worth more than a single life.

In this exclusive interview with The Big Thrill, Gilly talks about research, writing, and living in Australia during a pandemic.

I know, it’s a bad idea to judge a book by its cover, but title? That might be a different story. I was sucked in by the title before I read the premise or a single page. How did you land on it?

My brilliant editor, Kristin Sevick at Forge, came up with the title! I had something else in mind: White Queen. I was quite attached to it, but when we started the editing process, Kristin pointed out that it made the book sound more like a fantasy novel than a crime novel, and I agreed. We bounced a couple of ideas around until Kristin suggested DEATH RATTLE. As soon as she said it, I thought, “That’s it!”

Your two POV characters are extremely well developed—I love the complexity of their relationship, both at home and work. What can you share about the inspiration for each of them? Was one character more difficult to work with?

Thank you very much for saying so! I spent a lot of time imagining Nick Finn for my first novel, Devil’s Harbor, which is written from Finn’s POV. Mona features in Devil’s Harbor, but as a supporting cast member, so she’s a bit in his shadow.

I knew that I wanted to give Mona her own voice in my next book, so I started a character file for her. In it, I jotted down impressions and ideas of what kind of person I wanted her to be. I drew on a number of sources for inspiration: people I know, people I read about in newspaper reports, characters in fiction.

I knew from the outset that Mona was a person of conviction—you have to be, I think, to devote your career to helping others. Mona is a brilliant lawyer and could be earning a lot of money at a big firm. Instead she’s working for peanuts at a small not-for-profit. So I spent some time thinking about what might motivate a person to make that choice.

I also didn’t want to make her too odiously virtuous. I like the idea that every character should have a fun vice or two. Mona’s vice is that she’s vain, and she likes luxury. I made sure to show her putting on makeup or buying expensive but unnecessary clothes.

Finn is a simpler soul than Mona. He has some deep issues stemming from his difficult childhood, which I established in Devil’s Harbor.

Finn has a dark side. He’s a recovering alcoholic and is familiar with violence.

I imagined Finn and Mona as a couple who are attracted to one another because they’re different. Some couples have the same opinions, like the same things, and so on. Finn and Mona aren’t like that. If they were dating online, they would filter one another out. Finn never went to college, for instance, whereas Mona was an excellent student.

There’s a tremendous level of authenticity in this story—and you treated some serious topics with the respect and sensitivity required. Was there anything you discovered in your research that surprised you? And did this research provide insight into the message you wanted readers to have at the book’s end?

My main aim when writing a thriller is to keep readers on edge. I work really hard to make sure that the story is threaded through with a sense of dread. It needs to be a bit freaky, too.

But I’m also acutely aware that the world I’ve chosen to use as a setting—the border—is traumatic for many people. I invested a lot of time into learning as much as I could about how the border is experienced by those trying to cross it. I also spent time learning about border professionals—marine interdiction agents, like Finn, migrants’ rights advocates, like Mona, guards in migrant detention centers, and immigration court judges.

One of the most surprising things about the border I learned from Episode 5 of Season 3 of Malcolm Gladwell’s podcast Revisionist History: “General Chapman’s Last Stand. It tells the story of how the militarization of the US/Mexico border actually led to a rise in the number of undocumented migrants living in the United States, since stricter enforcement of the border forced workers who had previously come and gone from their homes and families in Mexico to stay in the US. It really made me think how policies can backfire if you don’t take into consideration all the people who have a stake in their outcomes.

I saw a lot of comparisons to Don Winslow’s The Border—such a great book, and I think an apt comparison. Who are some of the authors that have influenced your work?

I’m really flattered by the comparison. I can’t say which authors have specifically influenced my work, but I do know which authors have hooked me at various stages of my life, and I’ve probably tried to channel each of them in my writing in some way: Agatha Christie, Ed McBain, Elmore Leonard, Carl Hiaasen, Stephen King, Don Winslow, Michael Connelly, Patrick O’Brian, and Georges Simenon.

You’ve traveled quite extensively over the years! How has this travel informed your creative writing?

Great question. I’ve never thought about it before. I would say spending time in countries other than your home country helps you see the world from different points of view, which might be helpful to a writer in that it helps you be aware of your own unexamined chauvinism and encourages you to challenge it in your own writing.

DEATH RATTLE clips at an impressive pace. The Big Thrill is as much a publication for authors as it is thriller readers. What can you share about your process for ensuring that the pages keep turning?

Ideally, you want to create a gradual build-up to your Big Reveal that accelerates over the course of the book. That gives the reader the greatest satisfaction, I think.

It’s a crazy world out there right now. How have the past few months been for you in terms of health, general well-being, and of course, capacity to write? It’s also—in some ways—a terrible time to release a book. How have you adapted your marketing?

I’m lucky to live in Australia, where a combination of good governance and physical isolation meant that the pandemic was quickly brought under control, compared to the US. I didn’t have to change a great deal in my writing process over the past few months, except for the period when we had both our children at home and were helping them with their remote learning. My kids’ schooling became my main focus for that period, so it was hard to stay focused on the book.

Because I live in Australia, but my books are published in the US, my contribution to the marketing has always been remote, even pre-COVID, so it hasn’t been a big change for me. For instance, I never did any book tours for Devil’s Harbor, so not doing book tours for DEATH RATTLE doesn’t feel any different.

It’s an untitled standalone thriller, and that the protagonist is an interpreter. That’s all I can tell you for now!