Trouble Brewing in a Galaxy Far, Far Away 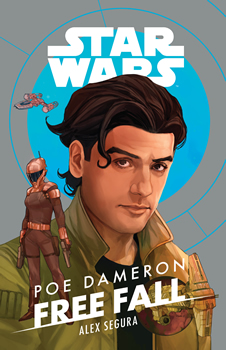 Some years after the demise of the Galactic Empire, trouble brews in a galaxy far far away.

Sometimes, novels offer the opportunity for fans to explore and discover the stories of their favorite movie characters beyond what’s shown in films. In this case, it fell on Alex Segura, a crime fiction author, to write the origin story of Poe Dameron, the rugged and dashing pilot of the Rebel Alliance from the Star Wars franchise.

“We meet Poe as a 16-year-old kid with dreams of exploring the galaxy,” Segura says. “But feeling stranded on his home world of Yavin 4. When he meets a band of mysterious travelers, Poe sees his chance to escape his backwater home planet and his father—who he loves, but who Poe feels is being overly protective in the wake of his mother’s death. Early on in his journey with the group, Poe discovers they’re actually Spice Runners—and he must grapple with his desire for freedom and the price it comes with, namely, working with a band of criminals that go against everything he was raised to stand for. It’s a story about growing up, choosing your destiny, and the weight of legacy, through the eyes of one of the best characters to come out of the Star Wars mythos. In short, it’s a rollicking crime novel in space.”

The book takes place in a time before the events of The Force Awakens, and thus we get to meet a younger version of the Poe Dameron from the films, a defiant teenager who’s become bored with his life, even when he still feels very connected with his family. His mother was a formidable pilot who trained him from a young age before she passed away, leaving his relationship with his father rocky and troublesome.

“Poe wants to experience what his parents had before him—namely, adventure and excitement in the greater galaxy,” Segura says.

But before he goes, Poe needs a ship. Lucky for him, Yavin 4, like many other planets in the galaxy, has its own watering hole, a cantina where the shady patrons talk business in hushed tones while ordering drinks.

“That cantina scene was a mix of A New Hope and crime movies like Goodfellas—where all the dangerous people got together,” Segura says. “But mostly, I wanted to add a little color to the Yavin 4 scenery, and give Poe’s story a more lived-in feel before he left the planet.”

And of course, that cantina is where we first meet some interesting Spice Runners from Kijimi—the characters that eventually become the crew with whom Poe shares his early adventures.

“There are a lot of crime/noir elements in this novel, and one of the first things I tackled was creating the crew Poe would ride along with,” Segura says. “Like any good heist film, it’s all about the characters. I wanted a diverse, complicated group of characters who’d not only contrast each other but reflect on Poe differently. It was really a ton of fun to add a bit to the overall Star Wars mythos by creating them.”

In his own work, Segura places himself in the camp with the majority of authors who write based on an outline and letting inspiration flow. For this novel, however, which is much more collaborative in nature, he created a detailed outline first, then wrote from there.

“I’m a big fan,” Segura says, “so a lot of information was already ingrained in me, but I did spend a lot of time re-watching the movies and reading up on the Poe-centric stories, like Charles Soule’s Poe Dameron comics and Greg Rucka’s prose work involving the character. Those stories gave me a lot of insight into Poe’s mindset and some great jumping-off points I could reflect in my own work.”

The project came about when the head of Lucasfilm Publishing and old friend of Segura’s, Michael Siglain, reached out to ask if he’d be interested in writing a Star Wars-related story.

“When we talked more and he explained it was a Poe Dameron project, I knew I had to say yes,” Segura says. “Then he connected me with the book’s fantastic editor, Jen Heddle, and we went from there.”

Segura is familiar with the YA space, having written a YA crime podcast in Lethal Lit and several comics—shifting gears from his usual crime fiction wasn’t hard. “I tend to write the same way no matter the age range, but I do filter out any bad words and overly adult situations,” he says.

In addition to being a great standalone story, POE DAMERON: FREE FALL will probably answer the questions fans had after watching The Rise of Skywalker—including more insight into the mysterious Zorii Bliss and Poe’s time with the Spice Runners.

“It’s not what you expect,” Segura says. “And I hope readers enjoy it.”