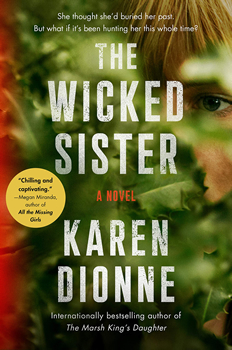 THE WICKED SISTER is about a young woman named Rachel who has chosen to lock herself away in a mental hospital for 15 years, believing that she is responsible for her parents’ deaths when she was 11. But when she learns new details about the day they died, she goes back to her family’s sprawling log cabin on 4,000 acres of remote, pristine wilderness in a quest for answers—not realizing that every returning memory brings her closer to losing her own life.

The idea for the novel came about after Dionne read a news item about a toddler who found a loaded handgun in his mother’s purse and accidentally shot and killed her.

“That incident touched me deeply,” Dionne says. “One day this little boy would inevitably find out what he had done. How would that knowledge change him? How could he live with himself going forward? Could he ever come to terms with the fact that, however unintentionally, he had killed his own mother? These are the questions that I wanted to explore in THE WICKED SISTER.”

Like The Marsh King’s Daughter, this novel is a standalone story. It also shares common ground—literally—with Dionne’s last outing, in that both books draw heavily from fairytales. However, unlike The Marsh King’s Daughter, which directly parallels the Hans Christian Andersen tale by the same name, THE WICKED SISTER incorporates aspects of several tales, including “The White Snake” and “Snow White and Rose Red” by the Brothers Grimm.

“THE WICKED SISTER also makes use of traditional fairytale elements to create an overall fairytale vibe,” Dionne says. “Rival sisters a la Cinderella and her wicked stepsisters, an evil stepmother in the form of Rachel’s aunt who may or may not have Rachel’s interests at heart, and an ‘enchanted’ raven which offers Rachel assistance and direction. Even the location where the story takes place, a beautiful log cabin in the middle of a vast and impenetrable wilderness, mirrors the mysterious-castle-in-a-forest trope common in many tales, creating an otherworldly atmosphere, as if the novel itself were a fairytale.”

The story is told from two points of view, Jenny in the past and Rachel in the present, mother and daughter respectively, which allowed Dionne to craft a story in which the reader knows far more than the characters—a plot device that Dionne particularly loves.

“Readers know from the first page that Jenny comes to a tragic end,” Dionne says, “so writing her half of the story in her voice as it was unfolding was both poignant and heart-breaking. I hope that readers will experience her story in the same way.”

As an author who once visited an active volcano to write about it properly, Dionne never holds back when it comes to research and isn’t shy about exploring difficult topics. For THE WICKED SISTER, she dove deeply into learning about psychopathic children, and some of the things she read about what such children have done were truly appalling.

Rachel’s parents are wildlife biologists, and her mother studies the black bears that roam the acreage that surrounds their home, so Dionne researched bears extensively as well.

“Aside from a few near misses back in the 1970s during my Upper Peninsula homesteading days, I don’t have any personal experience with black bears,” she says. “I wanted to draw attention to these magnificent animals not as a source of fear or danger, but as powerful creatures to be respected and admired, so I visited Oswald’s Bear Ranch in the Upper Peninsula, which happens to be the largest bear-only rescue facility in the entire United States. Owner Dean Oswald was a great help in answering my questions and sharing his intimate knowledge of the rescue bears he cares for.”

Dionne confesses that she wanted to go inside one of the bear enclosures, but the ranch’s liability insurance wouldn’t allow it, so standing next to a cage was as close as she could get. Sometimes adapting is key in this business—something authors with new releases this spring and summer know all too well.

Putting out a novel during a pandemic is a unique experience because all of her previously scheduled live book events have been moved online. Now, instead of speaking directly to fans in a crowded bookstore, Dionne, like others, will be visiting with readers from a corner of her home office.

“While I’m excited to be able to reach many more readers through video conferencing and Facebook Live events than I could have in person, I’m definitely going to miss those amazing in-store book talks,” she says.

In the meantime, she’ll continue to write.

Dionne’s previous novel takes place in Michigan’s Upper Peninsula marshes, and THE WICKED SISTER is set in a forest, so for her third psychological suspense, she selected a small town in Michigan’s Upper Peninsula on the shore of Lake Superior. Michigan is bordered by four of the five Great Lakes, and with over 3,000 miles of coastline, the lakes are as much a part of Michigan life as its marshland and forests.

“Lake Superior is the largest and deepest of the Great Lakes, and is known for its ferocious winter storms,” Dionne says, “which makes it a great place to set a novel. In fact, the stretch of shoreline where my story takes place is called the ‘Graveyard of the Great Lakes’ because more ships have been lost there than in any other part of Lake Superior, including the Edmund Fitzgerald—a fact which might give readers a hint as to some of my [upcoming] novel’s events.”