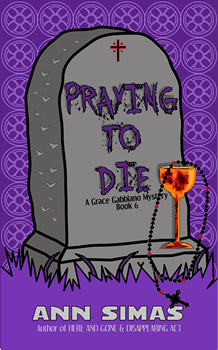 Father Sidney has gone off to find himself, even though he knows someone is stealing valuable items from St. Anthony’s. Coburg Police Chief Aidan Cruz decides it’s time for Grace Gabbiano to go undercover as a nun to find the thief. What she discovers is that Father Sidney’s search didn’t go well.

Author Ann Simas took some time out of her busy schedule to chat with The Big Thrill about her latest mystery, PRAYING TO DIE:

Like the first five Grace Gabbiano Mysteries, I hope readers will tackle Praying to Die with anticipation and enthusiasm—and keep reading long into the night! The chief volunteers Grace to go undercover as a nun at St. Anthony’s in an effort to ferret out the thief stealing valuables from the church.

Unlike her undercover gig as a streetwalker (Sliced to Die), this assignment doesn’t go exactly as planned (spoiler omitted), but it does turn up Father Sidney, who’s been gone for several weeks, “finding” himself. The priest, she discovers, has dark secrets. Investigating him takes Grace down a dizzying and often shocking path through his relationships. When readers finish this book, I want them to think, Wow, what a ride!

I learned something when I was writing my Andi Comstock Supernatural Mysteries, and I still find it startling: Catholic priests sometimes have a wife and children. While researching the church I wanted to use in my Andi books, I discovered that the parish priest, a former Episcopalian minister, had converted to Catholicism a few years back. He’s married and has kids, and he ultimately became the priest at the church I selected to pattern my fictional church after. Given the Catholic edict that priests, nuns, friars, and monks can’t marry, I’m not sure I understand how or why this exception occurs, but it does. (Note: the priest at Andi’s church isn’t married and had no offspring.)

In Buried to Die, Grace calls Uncle Vito, the former priest at St. Anthony’s, to perform last rites for a murdered woman found buried in the body farm. She avoids contacting Father Sidney, who is too by-the-book. In the Catholic Church, the belief is that death occurs when the soul leaves the body. Uncle Vito’s stance is since no one knows when that actually occurs, he’s comfortable performing last rites for a deceased person. He faces a similar scenario in PRAYING TO DIE. I had no idea that last rites had a caveat until I researched them.

The entire world knows that the Catholic Church has had more than its share of problems with priests who are pedophiles. Readers can rest easy. PRAYING TO DIE does not deal with pedophilia. Even so, Father Sidney has his own demons to deal with, which is why he takes a hiatus to “find” himself.

The secondary story in this book is about the lingering emotions Grace faces as a result of being abducted in Taken to Die. Dealing with the after-effects forces her to face that she’s not 100 percent on her game. Her thoughts aren’t always crystal clear, and her feelings for the chief are becoming something she doesn’t want to deal with. She is determined to never again have a relationship with someone she works with. Readers always ask when I’m going to let Grace and Aidan get together. My answer? Not for a long time… But it is fun to let their relationship progress in a way that could eventually lead to a romantic involvement.

I love hearing, “When is the next Grace book going to be out?” I’m thrilled that readers are so excited about this series! The answer to the question is, “Next July.” For spoiler reasons, I didn’t mention yet a third storyline in PRAYING TO DIE. When you read it, you will understand why. Suffice it to say, the next book will be titled Drugged to Die.

Ann Simas lives in Oregon, but she is a Colorado girl at heart, having grown up in the Rocky Mountains. The author of 31 books, she particularly likes to write mystery-thriller-suspense with a love story and often paranormal or supernatural elements.

An award-winning watercolorist and a budding photographer, Ann enjoys needlework and gardening in her spare time. She is her family’s “genealogist” and has been blessed with the opportunity to conduct first-hand research in Italy for both her writing and her family tree. The genealogy research from decades-old documents in Italian, she says, has been a supreme but gratifying challenge.