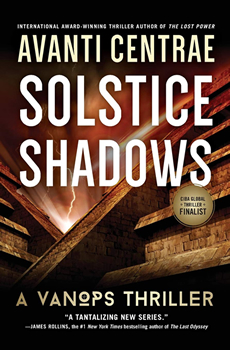 A computer app designer. An encrypted relic. Can she decipher the dangerous code before extremists trigger a high-tech apocalypse?

Software expert Maddy Marshall isn’t sure she’s ready for a hazardous role in black ops. But when an armed Russian thief makes off with a rare ancient star chart, the aikido black belt has no choice but to join her VanOps boyfriend and twin brother in the pursuit. If her royal Spanish family legends are true, the chart leads to a superconductive treasure trove capable of powering the ultimate instrument of global destruction.

Setting off on a mad dash to uncover the secrets of a Mexican archeoastronomy site, she and the VanOps team unearth a clue dating back to biblical times. But as they race across the globe to Morocco, Turkey, and Egypt, they find themselves only a half-step ahead of sinister assassins.

Before millions die at the hands of an anti-American Russian government, can Maddy crack the secret code?

Maddy Marshall and her boyfriend, VanOps Officer Thorenson, have a blow-out fight over communication with her ex. I’m looking forward to hearing how audio-book narrator Tim Campbell reads that scene!

I love how James Rollins is able to keep it fresh with each adventure in his Sigma Force series. Gregg Hurwitz does an amazing job evoking emotion in a genre more known for its body count. Steve Berry seamlessly weaves history into his novels. Carlos Ruiz Zafón is a magician with atmosphere. They’re all an inspiration.

I always love it when people ask me to describe the characters, as they are the heartbeat of the story.

Computer app designer Maddy Marshall is an intelligent, independent truth-seeker with special martial arts abilities. A strong advocate of non-violence, she’s on the fence about joining VanOps, especially now that her ex-boyfriend wants her back.

Tall, dark-haired Will Argones, Maddy’s twin brother, is a skeptic and always on the lookout for danger.

Broad-shouldered Theodore Thorenson, a bristly-haired Marine, has always wanted to carry the world’s troubles on his back by being a covert operative.

I hope the VanOps team can keep readers company during dark nights and lonely days, or can enhance their good days as they hold their breath while flipping pages. Besides pure entertainment value, I hope readers will learn about humanity’s awe-inspiring historical relationship to the stars and about the threat posed by the Internet of Things.

I love the ability to blend intrigue, history, science, and mystery into an action-packed story that keeps readers on the edge of their seats.

I was surprised to learn that the red-stone city of Petra, now the driest of desert ruins, was once a lush town, full of gardens and a complex irrigation system. Twenty thousand people lived there at its height, and it had a swimming pool over forty meters long!

Avanti Centrae is the author of the international award-winning VanOps thriller series. An instant Barnes and Noble Nook bestseller, her debut novel took home a genre grand prize ribbon at the Chanticleer International Book Awards, a shiny bronze medal at the Wishing Shelf Awards, and an Honorable Mention at the Hollywood Book Festival. Her father served as a US Marine corporal in Okinawa, gathering military intelligence during the first decade after the Korean War. Her work has been compared to that of James Rollins, Steve Berry, Dan Brown, and Clive Cussler. She resides in Northern California with her family and German shepherds.