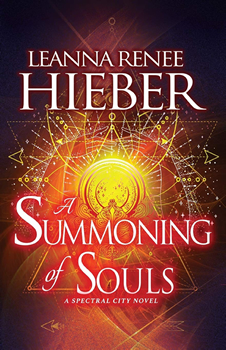 In Gilded Age NYC, the top-secret Ghost Precinct pursues justice beyond the earthly realm in this paranormal historical mystery series.

The ethereal denizens of New York owe a great debt to Eve Whitby, the young medium who leads an all-female team of spiritualists in the police department’s Ghost Precinct. Without her efforts on behalf of the incorporeal, many souls would have been lost or damned by means both human and inhuman.

But now Eve faces an enemy determined to exorcise the city’s ghostly population once and for all. Albert Prenze is supposed to be dead. Instead he is very much alive, having assumed the identity of his twin brother Alfred and taken control of the family’s dubiously acquired fortune. To achieve his vicious ends, Albert plots to twist Eve’s abilities into his own psychic weapon—a weapon that not only poses a threat to spirits but to everyone she cares for, including her beloved Detective Horowitz…

The Big Thrill caught up with award-winning author Leanna Renee Hieber to discuss the latest installment in her Spectral City series, A SUMMONING OF SOULS:

I love toying with electricity. It was such a new invention in the late 19th century, it was still unpredictable, dangerous, and thoroughly fascinating. I’m a bit cruel to my characters in how I use it… (all right, I’m VERY cruel to my characters) but I hope it creates a thrilling, if not shocking effect. In this book, I also take the opportunity to wax rhapsodic about one of my favorite creations and feats of engineering in all of human history: the Brooklyn Bridge.

The author with the most consistent, far-reaching influence continues to be Edgar Allan Poe. His use of language, merging the beautiful and terrible, the paranormal and the mundane, is a balance I strive to strike well. Anne Perry remains a chief influence, and I look to writers like her and Deanna Raybourn for ideas on striking the balance of period tone and modern pacing. And there are a slew of 19th century texts and guidebooks about New York that have shaped my interests and the courses of books, as little fascinating tidbits take on entire plot structures and frames on which I can hang a mystery.

Why are your books so character-driven and keep returning to teamwork narratives?

Quirky characters help me tell the story. I see my worlds through their eyes. As an actress, I can’t help but let the characters drive the story, and I invest deeply in each one; it’s why there are so many crossover characters from one of my series to the next. In a world that is often quite divisive, I find that teamwork narratives are very gratifying. I love letting each character have their own specialty and talent, exploring every aspect of what’s possible, and I thrill with my characters when they master new skills. I believe in the infinite possibility of humankind and love to celebrate that in my work.

I have continued to be heartened by how industrial changes and innovations paved the way for more women to enter the workforce in various capacities, as artists, operators, matrons, union organizers, and more. So much of our sense of modern life was shaped in the late 19th century, and it’s thrilling to see continued instances of progress and inspiration amidst a still restrictive time period. It makes for such a dynamic setting in which to write confident, headstrong, and idealistic characters who fight hard for a better day for everyone.

I love that adding paranormal elements into a historical narrative at this stage in history, because I’m dealing with ghosts and the spirit world, inevitably draws upon the entwined history of Spiritualism with women’s rights. Spiritualism was a place where women could be ‘experts’ in their field. There was still the question of belief, believability, and respectability, but the interest in the Spiritualist movement allowed for women’s spheres to expand. Merging the fantastical with the historical allows for me to highlight different aspects of history in new ways and gives my team exciting and also terrifying challenges. My characters have to grapple with the real challenges, realities, and limitations in history as well as be constantly, ceaselessly inventive with the paranormal terrors I throw at them.

Leanna Renee Hieber is an actress, playwright, ghost tour guide, and the award-winning, bestselling author of twelve Gothic, Gaslamp Fantasy, and Supernatural Suspense novels for adults and teens for Tor, Sourcebooks, and Kensington Books. Her Strangely Beautiful saga, beginning with The Strangely Beautiful Tale of Miss Percy Parker, hit Barnes & Noble and Borders Bestseller lists and garnered numerous regional genre awards. Tor Books notes Strangely Beautiful as a “foundational text of Gaslamp Fantasy” and new, revised editions are now available via Tor. Darker Still was named an American Bookseller’s Association “Indie Next List” pick, a Scholastic Book Club “Highly Recommended” title, and a Daphne du Maurier award finalist. The Eterna Files trilogy is now complete with Tor Books. The Spectral City, her new Gaslamp Fantasy series with Kensington, has been a repeat # 1 bestseller across several genres and digital platforms. A four-time Prism Award winner for excellence in the genre of Fantasy Romance, Leanna’s short stories have been featured in notable anthologies, and her books have been selected for national book club editions as well as translated into many languages. She lectures on Gothic fiction and paranormal themes for prominent institutions such as New York University and at conventions and conferences around the country. A proud member of Actors Equity and SAG-AFTRA, Mystery Writers of America, SFWA, Historical Novel Society and International Thriller Writers, she lives in New York City, where she is a licensed ghost tour guide with Boroughs of the Dead and has been featured in film and television on shows like Boardwalk Empire and Mysteries at the Museum. She created and tours “By the Light of Tiffany,” a one-woman show about the talented 19th century designer Clara Driscoll. She is represented by Paul Stevens of the Donald Maass agency.