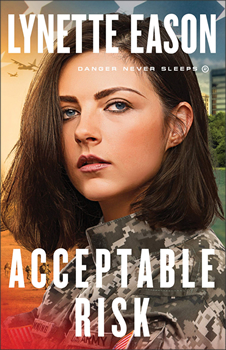 Sarah Denning is a military journalist with the Army in the Middle East when her convoy is attacked and she’s taken hostage. When former Army Ranger Gavin Black is asked by his old unit commander–Sarah’s imposing father–to plan an extremely risky rescue, he reluctantly agrees and successfully executes it.

Back in the US, Sarah is livid when she’s discharged on a false psychiatric evaluation and vows to return to the Army. Until she learns of her brother’s suicide. Unable to believe her brother would do such a thing, she puts her plans on hold and enlists Gavin to help her discover the truth. What they uncover may be the biggest story of Sarah’s career–if she can survive long enough to write it.

Strap in for another breakneck nail-biter from bestselling romantic suspense author Lynette Eason that will have you up turning pages long into the night.

Eason was kind enough to spend some time with The Big Thrill discussing the second installment of her Danger Never Sleeps series, ACCEPTABLE RISK:

I hope they’ll be seriously entertained and maybe a bit horrified to think something like that could really happen. You’ll have to read the book to know what “that” is. 🙂 And if the story makes readers think about things or helps them clarify something they’d been struggling with in their own lives, or gives them an “aha moment,” then that’s awesome, too.

The book is full of suspense, emotion, bad guys, and good vs. evil.

Writing every book always uncovers something new for me. The research alone is fascinating. And while I didn’t put all of the details into the story because they simply weren’t needed, I learned the process for how a new drug is tested and finally cleared by the FDA for use on the general public. Frankly, it’s kinda scary.

My character, Sarah, has a rough background. She has secrets and shame she’s never shared with anyone. Being vulnerable is not on her “top ten favorite things to do” list. But she grows as a person and learns some things about herself that allow her to find peace in her world gone crazy.

Lynette Eason is the bestselling author of Collateral Damage and Protecting Tanner Hollow, as well as the Blue Justice, Women of Justice, Deadly Reunions, Hidden Identity, and Elite Guardians series. She is the winner of three ACFW Carol Awards, the Selah Award, and the Inspirational Reader’s Choice Award, among others. She is a graduate of the University of South Carolina and has a master’s degree in education from Converse College. Eason lives in South Carolina with her husband and two children.