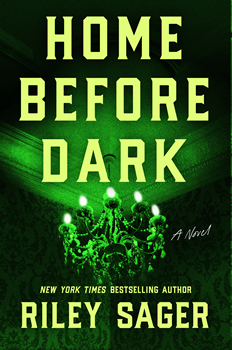 But with his latest release, HOME BEFORE DARK, Sager ticks off an item that continues to leave him in “amazed confusion”—the book’s cover glows in the dark.

“I didn’t know it would glow in the dark until my publisher sent me a video of the finished version,” Sager says. “At first, I thought it was just one special cover designed as some fun thing for social media, so I was delighted to learn that, no, every cover would be like that. My editor later said, ‘I thought I mentioned it to you.’ And I was, like, ‘I’m pretty sure I would have remembered that.’”

It’s perhaps a fitting reward for completing what Sager claims is his most challenging book to date.

HOME BEFORE DARK follows the story of Maggie Holt, a restorer of homes who, after 25 years, returns to Baneberry Hall, a Victorian estate in the Vermont Woods—a place where, according to her father’s nonfiction book, House of Horrors, her family spent three terrifying weeks before fleeing in the dead of night.

Maggie was too young to remember any of the horrors her father recounts in his book, but she doesn’t believe any of it anyway—ghosts aren’t a thing.

Told in alternating points of view—both Maggie’s and the chilling chapters from her father Ewan’s book—HOME BEFORE DARK chronicles the past and present of a house with long-buried secrets and Maggie’s quest to uncover them—at any terrifying cost.

In this interview with The Big Thrill, Sager delves deeper into the complexities of writing a book within a book, the importance of pen names, and what’s left on his bucket list.

HOME BEFORE DARK is such an atmospheric and creepy read—and the structure is quite ambitious. On a scale of 1-10, with 10 being hardest, how did writing this book compare to your other three?

Oh, it was a 10. I knew going in that writing two books in one and toggling back and forth between them was going to be a challenge. I just didn’t realize how massive of a challenge it would ultimately become until it was too late to change my mind. And it ended up being the hardest thing I’ve ever written. Adding to the difficulty was the fact that the book within the book was supposed to be this massive nonfiction bestseller from the mid-nineties and needed to read as such. There were so many points in the writing process when I’d stop and ask myself, “Why did you think this was a good idea again?”

Because they’re narrated by two different people, my initial strategy was to write each book separately, starting with the book within the book, and then interweave them. But I quickly learned that these two stories have such a symbiotic relationship that it would flow better if I wrote them together. My goal was for it to feel like these two separate books were unfolding simultaneously—just 25 years apart. I wanted Maggie’s story and Ewan’s story to reflect each other like a pair of funhouse mirrors, and that required them to be in sync at all times.

Classic horror films often inspire your books—what influences are in HOME BEFORE DARK and what elements are you most excited about?

The primary influence was The Amityville Horror, which is strange because I don’t particularly like the book or its movie versions. What I find fascinating is all the real-life intrigue surrounding it. It’s a real house, and a real family that lived there insisted all those crazy things happened. I think most people agree it was a hoax, but no one knows why. And I thought it would be interesting to have a character who ostensibly went through a similar scenario at a young age and, because she can’t remember any of it, doubts everything she’s ever been told about their time in that house.

What I’m probably most excited about is that I was able to make one of my all-time favorite movie musicals part of the plot, but in the creepiest of ways. I won’t spoil it by naming the movie or the song used, but already I’ve had several readers tell me I ruined their childhoods, which gives me such a thrill. If that’s wrong, I don’t want to be right.

Megan and Ewan had such engaging and contrasting points of view—which character was easier for you to connect with and why?

I definitely connected more to Maggie, because hers is the story with stakes. Ewan’s account of their time in that house is 25 years in the past. Yes, it’s suspenseful and scary, but he is, in essence, the unreliable narrator in this tale. And Maggie has to sort through everything she knows about her family and their time in that house to learn the truth. That was very compelling to me.

Congratulations on the option for HOME BEFORE DARK—I can’t think of a better producer to be attached than Shawn Levy (Stranger Things). It’s still early, of course, but can you share any news on where we’re at with this?

It’s very exciting. Several studios really wanted it, and I got to have a few wonderful conversations with some very talented people. I ultimately went with Shawn and his production company because of the vision they had for how to bring this dual narrative to the screen. That being said, COVID-19 has brought everything to a screeching halt, so there’s been no other news to share. As for the other options, I’m never sure how much I can say about them. Some of the projects have changed hands and are now in development at new places. Others are sitting idle for now, and that’s fine. Hollywood works in mysterious ways, and I’ve learned not to question it or spend too much time worrying about it.

The industry—and the world—is experiencing tumultuous times. How have you adapted to this, and what advice would you pass on to aspiring thriller/suspense authors?

This year has felt like a damn decade, and I’m so tired. As is everyone. But I’m impressed by how quickly the industry—booksellers, especially—was able to adapt. When my book tour was canceled, we immediately came up with ways to still have book events and still get signed copies into stores. The result is that I’m reaching more readers now than I would have if I’d gone to some of these stores in person. That’s not to say the in-person bookstore visit is dead, but we now know of new ways to connect with readers, and I think those will continue to be used in the future.

My advice to aspiring thriller writers would be to think twice about writing a book based on the current state of the world. Because by the time it’s written and revised and edited and released, the world will hopefully look a lot different. I think there’s definitely a place for pandemic and quarantine fiction, but it has to have resonance beyond current events.

You’ve had staggering and well-deserved success as “Riley Sager”— what was the catalyst for the pseudonym and why do you think this new “branding” has done so well for you?

When Final Girls came out and blew up like it did, I was very reluctant to talk about the pen name, for a number of reasons. But now I like to discuss it, because I think it’s helpful to demystify the publishing industry. So many people think it’s all about the art and the craft of writing, but that’s only one aspect of the business. And it is most definitely a business. Not enough people talk about that. I made a business decision.

I wrote Final Girls after losing my job and being dropped by my publisher. I couldn’t find another job that paid more than minimum wage, and I was desperate for some income. I knew Final Girls had potential, but sales of my previous books didn’t back that up. They were low. Like, ridiculously low. My agent and I discussed it, and she told me that if I put my real name on Final Girls, most editors we sent it to would look at my past sales and instantly pass. Or offer me a low advance. Or release the book without a drop of promotion. All of which had happened to me in the past. Because it was my last-ditch shot at trying to have a writing career—and because I truly, deeply loved the book—I agreed a pen name was the best way to go. We submitted it to editors blind, so they had no choice but to judge the book based only on its merits and not my past sales. I removed myself from the equation and let the book speak for itself. The team at my publisher decided to do the same thing for the book’s release.

All the success I’ve had since then has been a combination of tremendous luck and hard work. I’ll be the first to admit that Final Girls got a lot of attention because some very generous, very famous people talked about it on Twitter and on TV. It was amazing to witness. Truly a dream come true. But I also know from my past experiences in publishing that you can’t plan for that kind of exposure. A lot of it is just dumb luck, and all the attention Final Girls got could have just as easily gone to another book. Because of that, I feel like I’m always trying to retroactively earn my earlier success. Maybe it’s imposter syndrome, but I can’t shake the need to continually prove myself. So I work very hard. I try my best. I produce a new book each year because that’s what the market demands. And I try to give my readers what they want in a way that’s also creatively fulfilling for me. So far, it seems to be working.

What—if anything—can you share about what you’re working on next?

I can share very little, other than to say that it’s the complete opposite of HOME BEFORE DARK. This one is going to be smaller, faster, more stripped down. I want it to feel like a car speeding down a highway at night. After tackling two books in one, I just really needed that change of pace.

We started this interview talking about your writerly bucket list. Having already crossed off “glow in the dark cover,” what’s left?

Honestly, I’m good. I’m sure it would be great to have more sales or a No. 1 bestseller or one of my books turned into a movie, but I’m perfectly content if none of that happens. I’ve been so fortunate in so many ways that to ask for more just feels greedy.

The July 2020 Edition of The Big Thrill