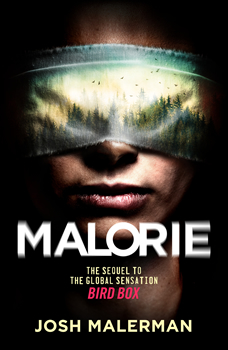 Josh Malerman is probably best known for his New York Times bestselling horror novel Bird Box—but it wasn’t the first book he wrote. In fact, by the time it got picked up, he’d penned 10 full-length novels.

Even now, with 32 under his belt and nine published, Malerman admits he’ll probably always be known for Bird Box. Not that he’s complaining. Four years after the book’s release, Netflix turned it into one of the platform’s most-streamed movies, countless memes have been created about it, and oh, yeah, the Sandra Bullock starred in the leading role of Malorie.

“I used to always say that the ultimate fantasy of every horror writer is to write a monster that every person wants to wear a mask of for Halloween,” Malerman says. “So I’m always on the lookout for a Malorie mask, but no, that hasn’t happened. However, I do see Sandra Bullock as Malorie throughout pop culture. Everyone knows who Malorie is—and I don’t think I’ll ever get used to that.”

Malerman is hoping some of that character recognition will create buzz for what has already been dubbed the “sequel you never knew you needed.”

MALORIE picks up 12 years after Bird Box ends. Malorie’s children—Tom and Olympia—are teens, and while there’s no evidence to suggest the monsters are still out there, there’s no reason to believe they aren’t either. And so Malorie continues to live the way of the blindfold, teaching her children how to survive what is a whole new world—their terrifying new normal.

Malerman can’t help but draw parallels to how society is currently adapting to the coronavirus pandemic—the process of unlearning familiar habits, like shaking hands or hanging out in large groups, is akin to Malorie helping her kids understand why they must not take off their blindfolds. They must not look.

Part of the conflict, of course, is that Tom may be living an atypical life—but he’s still a typical boy. He’s itching to rebel, to strike out on his own and challenge the existence of these unseen monsters.

“It’s scary out there,” he says. “And how are we going to know when it’s safe? Will a vaccine help? Is it being rushed? Obviously Bird Box and MALORIE represent the ‘fun’ scare and what we’re living through is very different. But I did have a moment when I was getting ready to go outside and I thought, Don’t look. It was only a second long, but I thought I was living Malorie’s life.”

Malerman wouldn’t admit it—he’s as humble as he is talented—but the reason he likely had that moment of mixing up his realities—both terrifying to some degree—is because he’s an immersive writer, the kind of author that sucks you into the story and makes you feel. And the feeling you get after reading MALORIE is fear.

Creating suspense is one of Malerman’s most talked-about skills, and it shines in this novel.

“My mom read the rough draft of Bird Box and she said, ‘You kind of wrote an inverse horror novel,’ and in a way she’s right,” Malerman says. “Because in a typical horror story, you’re scared of what you see. But in Bird Box, the sights are removed—and anywhere you look could be the end of you.”

To create that tension, Malerman says he stripped away anything that took away from the central message: if you see this—whatever this is—you will go mad.

“I got to a point where I started to wonder if I was leaning on that too much,” he says. “If I was trimming too much of the fat. It was very tempting to think that I could get away with resting the whole book on that premise—so I knew I had to flesh things out.”

His reservations were soon alleviated with the success of Bird Box—but when it came time to write the sequel, a decision that did not come lightly, Malerman found himself again wondering if he could sustain the tension. He does—and then some.

MALORIE is as terrifying as Bird Box—if not more.

Impressive for someone who could have succumbed to the pressure of having to create a worthy sequel to what is one of the best horror novels of the past decade. (Stephen King agrees!) While he admits he did have a brief moment of nervousness, “Malorie to me has always been the smoothest, easiest, most relatable character I have ever written.”

That’s important for Malerman, who says he’s always trying to stretch not only his own skills but also the confines of the genre. While he did grow up on classic horror stories, his writing is more influenced by iconic tomes by authors like Virginia Woolf and William Faulkner. At some point his thirst for classic literature led him to Dracula—and it opened the door for him to return to the genre of his heart: horror.

“I love that horror authors of this era are challenging the tropes,” he says. “Elastic writers—stretching the genre. We all grew up in the ’80s, which was a heyday for horror, and I think I understood that I wanted to be part of that. But I wanted to do it differently. Look, if horror is home, you’re going to get there anyway, but you don’t have to get there through traditional routes. Read widely. Stretch but not just for stretching’s sake. As you’re saying that you want to be original, realize that you already are.”

For Malerman, originality is key—and it’s what keeps him writing, even when not everything he writes gets published. The right ones do, he says, and of the 32 books he’s completed, he thinks all but one will someday find its way to readers.

For now, Malerman hopes his fans will embrace MALORIE and check out the free book posted on his website, a novel he wrote during the pandemic. As for whether Netflix will take up the sequel gauntlet with a MALORIE adaptation, Malerman is remaining tight-lipped—for now.

Unlike Malorie and her kids, I guess we’ll just have to wait and see what happens.

On the Cover: Riley Sager