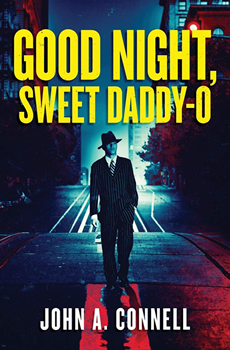 Set in San Francisco in 1958, GOOD NIGHT, SWEET DADDY-O is about a struggling jazz musician forced to change his profession after a midnight beating leaves his hand paralyzed. His best friend, George, talks him into distributing heroin for a gangster—and what was supposed to be quick money quickly becomes life threatening.

The Big Thrill recently caught up with author John Connell to discuss his new novel, music, and the research necessary to set a book in the ’50s.

How did the plot of GOOD NIGHT, SWEET DADDY-O come about?

I’ve always enjoyed reading hardboiled and noir crime fiction, from Dashiell Hammett and Jim Thompson to James Ellroy and Elmore Leonard, and loved watching ’40s and ’50s film noir movies, so I wanted to explore something in a similar vein. And since I’ve had a lifelong fascination with the Beat generation, it all seemed like a perfect fit: have a gritty, dark tale of a group of disaffected Beat-generation youth cross deadly paths with film-noir-style gangsters.

I wrote the first draft a number of years ago, and I’ve been tinkering with it ever since, writing then putting it down, only to pick it back up again and tinker with it some more. I knew the premise might make it difficult to determine where to place it on a bookshelf, so I would let it percolate while I gained more experience with writing and publishing other books. About eight months ago, I dusted it off again and took another look. I immediately got sucked into the story. And, despite reading and editing several new drafts, I found it difficult each time to pull myself away. That’s when I knew it was ready, and I had to get it out there and see what readers think.

Was it hard to do research for a novel set in the late ’50s?

Doing the research is one of my favorite things, which is fortunate since I write historical thrillers. Actually, I had plenty of material to work with, and I particularly enjoyed doing some deep learning about the Beat generation: the writers, artists, and thinkers of that movement. It was also relatively easy to find personal accounts of life in San Francisco at that time, and even crime statistics, the cost of living and average salaries and, as an added bonus, I found a document with the average prices for heroin, both wholesale as well as the street value for smaller quantities.

What instrument did Frank play before his mishap?

Frank’s instrument is the piano. His focus is jazz, and he dreamed of being a composer as well as a performer. All those dreams are shattered when he takes a beating from a loan shark, leaving the fingers of his left hand paralyzed.

I have a full-blown bio on Frank and could bore you with all the details. But some of the basics are that he was born Frank Caruso Valentine, his parents were second-generation Italian, and Frank spent his early childhood in Boston before his family moved to California. He adheres to precepts of Beat culture, but is more a follower than a creator. As he says, he’s “fringe Beat,” meaning he’s neither a grand poet nor a Beat philosopher, but he believes in the principles even if he fails to strictly follow them. His father, a dockworker, died young, leaving Frank and his mother to fall into hard times. He’s passionate and intelligent, but still naïve about the world and has pinned all his hopes on a career in music. When that dream is shattered, he’s desperate for a way out of his worsening situation. Unfortunately for him, he idolizes his best friend, George, and embarks on a deadly path when he turns to George for salvation.

Can you tell us about Frank’s love interest?

Rebecca Debernardi is an intelligent and resilient woman in her mid-20s. Her main weakness is a lack of self-esteem, which her gangster lover, Hanson, exploits. Growing up in a wealthy household, she was a spoiled teenager and ran away with the sophisticated older man, partly to defy her parents. Now, she feels trapped both physically and psychologically, reluctant to give up the good life Hanson provides and flee the gilded cage. But most of all, she fears Hanson’s wrath. That is, until she falls head-over-heels in love with Frank.

How do you feel about basing characters on real people?

I avoid it. It’s not that I’m against an author doing that. In fact, in my first Mason Collins post-WWII thriller, I do have Mason interviewing two of the most notorious Nazi doctors who performed human experiments in the concentration camps. I’ve had a couple of cameos in book two of that series. Other than that, I’ve opted for creating my own characters.

My characters are amalgams of individuals I’ve read about or known, taking bits of personal histories and characteristics and recombining them. Some of the characters were inspired by snippets of the lives of the Beat writers, but most of their traits came to me during the writing process.

How would you describe the novel and the work that entailed?

GOOD NIGHT, SWEET DADDY-O has been a labor of love. Of course, I’ve loved writing all my books, but I dug deep on this one and took some chances. This story is a slow burn in the beginning, taking extra time with the people who populate the story. So, while it’s a crime thriller, it is also heavily character driven, and we watch Frank and his friends as they venture deeper and deeper into the dark heart of San Francisco until it overwhelms them in an explosive ending.

John A. Connell writes spellbinding crime thrillers with a historical twist. In addition to his standalone, GOOD NIGHT, SWEET DADDY-O, he writes the post-WWII Mason Collins series, which follows Mason to some of the most dangerous and turbulent places in the post-World War II world. The first, Madness in the Ruins, was a 2016 Barry Award nominee, and the series has garnered praise from such bestselling authors as Lee Child and Steve Berry. In a previous life, John worked as a cameraman on films such as Jurassic Park and Thelma and Louise and on TV shows including NYPD Blue and The Practice. Atlanta-born, John divides his time between the US and France.

Between the Lines: Josh Malerman

July 6 - 12: "Do you encourage your family and community to read more?"