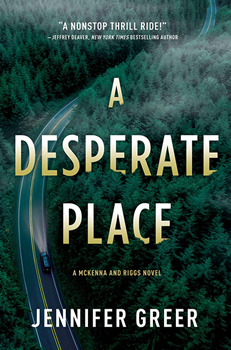 When the body of famous actress Niki Francis is unearthed from its shallow grave, the small town of Medford, Oregon, is alarmed, but not shook. After all, there should be plenty of motives and suspects—Niki had fame, wealth, looks. The kill was targeted, premeditated, and it’s about her celebrity. Or so they thought.

Whit McKenna is licking her wounds, working as a reporter for the local Medford rag. Fresh from a harrowing assignment for her previous post at the L. A. Times which cost her her husband, Whit must pull herself together for the sake of her two daughters. The wound has hardly begun to scab when she’s called to cover the murder, so she teams up with her best friend, medical examiner Katie Riggs. Then two more victims turn up, completely disconnected from one another, and McKenna loses all hope of a breakthrough.

Rather than clarity, the possible suspects and motives become scrambled. But time is running out, and each front-page article McKenna writes brings her closer to a killer who will stop at nothing to realize a deadly vision.

The Big Thrill tracked down author Jennifer Greer to find out more about her debut thriller, A DESPERATE PLACE:

There are many aspects of the research and storyline that I really didn’t expect when I first started the book. It evolved quite naturally and the characters developed a depth I didn’t expect but very much enjoyed.

I would love readers to get lost in the story and feel fascinated by the unique storyline. I hope they are thrilled by every new twist and turn and develop a real connection with the two heroines.

I love thrillers and mysteries. It’s always a challenge to figure out who the villain is and what he/she will do next or if the hero or heroine will be able to outwit evil. It’s all about the twists and turns and surprises, much like life.

The story is wonderfully unique in its subject!

Why did you persevere in writing and finally getting this book published?

I had started and failed to finish several books prior to this one, but I felt deep down as a journalist that this was a story worth telling.

Most of all, when I was in my early teens, my mother had me read The Lady of Shalott by Alfred, Lord Tennyson. What a thriller…

“Under tower and balcony,
By garden wall and gallery,
A pale, pale corpse she floated by,
Deadcold, between the houses high,
Dead into tower’d Camelot.
Knight and burgher, lord and dame,
To the planked wharfage came:
Below the stern they read her name,
The Lady of Shalott.”

Jennifer Greer began her writing career as a journalist. She graduated from California State University, Fresno with a degree in journalism and worked as a crime reporter for the Fresno Bee.

Interested in foreign affairs, she traveled to Russia in the late ’80s and lived in London studying art and literature.

While abroad she traveled into the war regions of Croatia and wrote an award-winning article on the women and children refugees.

Jennifer raised two daughters on her own after her husband died in a tragic car accident when her children were very young. Both daughters are grown now and venturing into history and legal careers.

Growing up as an Air Force brat, Jennifer moved around as a child and that wanderlust followed her into adulthood. After living in many US states, Jennifer has settled on the Oregon coast, where she lives with her husband and their cat, Henry.