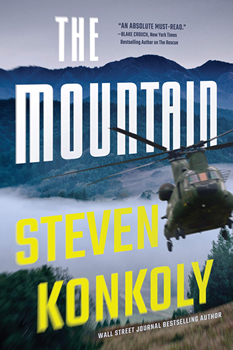 When someone goes missing on Northern California’s lawless Murder Mountain—it isn’t news. The vast terrain for illegal marijuana harvests is also a notorious black hole for outsiders. But when that someone is the family friend of the persuasive and righteous Senator Steele, finding him becomes covert investigator Ryan Decker’s mission.

What begins as a seemingly straightforward favor soon pulls Decker and his partner, Harlow Mackenzie, into a high-stakes conspiracy linked to the most cold-blooded puppet masters and power brokers in the country. The harder Decker and Harlow work to expose the insidious faction, the harder it’ll be to make it out of Murder Mountain alive.

I simply hope that readers have a blast reading THE MOUNTAIN. If I accomplish that mission, I can sleep soundly at night.

THE MOUNTAIN was inspired by the Netflix miniseries Murder Mountain. While the ultimate circumstances surrounding the disappearance and murder showcased in the series turned out to be a fairly simple crime of opportunity committed by locals, I recognized the unlimited potential to turn this secretive and isolated environment into a complex, multi-layered organized crime racket.

Researching northern California’s Emerald Triangle, I was blown away by the annual estimated dollar value of the area’s illegal or “outlaw” marijuana harvest. Conservative estimates put the value of the tri-county harvest at more than a billion dollars. That’s a ton of incentive for crime syndicates to expand their influence in the region, which becomes the focus of THE MOUNTAIN.

Is all of the technology used by your characters (protagonists and antagonists) real? Some of it feels a little far-fetched…

Most of the technology—drones, spider bots, surveillance gear and methods, weapons, facial recognition systems—exists in the same form today. A few of the devices have been “improved” by the author to represent near future or next generation technology being tested by the government or military. I can neither confirm nor deny that the spider bots in The Raid (book 2) pack the same punch as their currently deployed counterparts.

Steven Konkoly is the Wall Street Journal and USA Today bestselling author of over 20 novels and novellas. Steven graduated from the United States Naval Academy in 1993, receiving a bachelor of science in English literature. He served the next eight years on active duty, traveling the world as a naval officer assigned to various Navy and Marine Corps units. His extensive journey spanned the globe, including a two-year tour of duty in Japan and travel to more than 20 countries throughout Asia and the Middle East.

From enforcing United Nations sanctions against Iraq as a maritime boarding officer in the Arabian Gulf to directing aircraft bombing runs and naval gunfire strikes as a Forward Air Controller (FAC) assigned to a specialized Marine Corps unit, Steven’s “in-house” experience with a wide range of regular and elite military units brings a unique authenticity to his thrillers.

The Adventure of the Murdered Midwife by Liese Sherwood-Fabre

Never the Crime by Colin Conway and Frank Zafiro