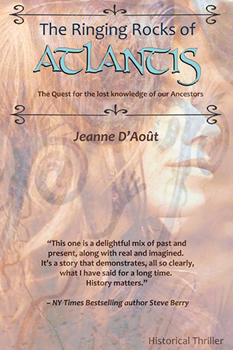 Jeanne D’Août learned at an early age not to believe everything you’re told—at just seven years old, she challenged her Bible class teacher about certain contradictions she’d found in the gospel. Rather than answer her questions, he simply sent her out of the room.

“This made me very suspicious indeed—and I ended up double-checking everything I was taught at school,” D’Août says. “I found several problems during history class, and by the time I was a teenager, I had become addicted to topography, the history of civilization, and anthropology.”

While her classmates danced their free time away to Saturday Night Fever, D’Août spent hours in the library, stoking her need to understand the truth behind ancient myths and legends. At first, D’Août only wanted to feed her own curiosity, but as she got older, the desire to share what she’d learned grew stronger.

“There are so many misconceptions in the world of history,” she says. “So now I am sharing my findings as much as possible.”

Some of that is through the guided tours she runs out of France and Greece, but much more information-sharing goes into her writing, particularly on the pages of her bestselling time travel trilogy, which ends with her latest book, THE RINGING ROCKS OF ATLANTIS.

Although the three novels form a trilogy, D’Août says she includes short introductions to the characters and the history so that they can be read as standalone thrillers. In THE RINGING ROCKS OF ATLANTIS, a secret room hidden behind a bookcase reveals clues that propel a team of relic hunters on the ultimate quest: the thrilling search for Atlantis.

As with all of her work, D’Août dove headfirst into research for this novel, uncovering some fantastic nuggets of information along the way—most significantly, the theory that this mythical island or realm can be compared to the world of the Celts and Druids, the Phoenicians and the Minoans.

“There have been several floods and cataclysms throughout the ages, which, for the sake of Plato’s original story, were simply added together by this Greek philosopher to make it easier for others to understand,” she says. “However, we have come a long way since Plato. Like a meatloaf boiled in the oil of lore, we now need to take out all of its ingredients and find out where those ingredients come from, when they were harvested, and how they ended up in one product. And when I did this in my usual Sherlock-Holmesian-way, I may have found the original flame that created the smoke around the Atlantis myth.”

It’s heady research, but D’Août makes it work, weaving in this fascinating history among the page-turning suspense, and the fantastical elements of time travel. To create a believable time travel device, D’Août consulted a theoretical physicist and asked him about the challenges of creating a safe device that could work with controllable wormholes in today’s day and age.

“Then I invented a professor who tackled those problems, and voila, the time-traveling stories were born,” she says.

While Atlantis is the subject of the third book, D’Août’s professor and his team tackle the story of Oshu—the real Jesus—in The Forbidden Relic, and the Egyptian Pharoah Akhenaten in The Eye of Ra. D’Août says she always knows the subject of her books, but she then allows the research to guide her through the plot.

Such was the case again with THE RINGING ROCKS OF ATLANTIS.

“It feels as if I am guided by muses, inspired by unknown dimensions,” she says. “And the end result, including the final chapter, literally only came to me a few days before I wrote it. I don’t know how many times I told my husband that I had no idea how to get my characters out of the mess they were in, but every time they survived somehow, so it felt to me as if I was writing a witness account rather than creating a story myself.”

“Like an ouroboros, the final chapter of this book bites into the first chapter of book one,” she says. “Let’s see what the future brings and if this series picks up, I could always write a spin-off—separate stories on the characters that, apparently, people have come to love. The future is blank, and perhaps in a few years I will create another sequel—who knows?”